Home » Elections » Kaine, Clinton Want Us to be Ashamed of America

Author’s note October 8, 2016: this post was published just before the Trump audio tape crisis began. What has changed since yesterday? Democrats and their media are having a field day. We expect that. They will never acknowledge their candidate’s tacit acceptance of Bill Clinton’s behavior in the White House.

We don’t deserve what we are getting from the GOP. Republicans are turning into a pack of cowards. Is the party going to throw in the towel instead of standing up to Hillary?

This will play into Paul Ryan’s hands. A Hillary Clinton win is an impeachment opportunity he will never see again and I suspect he’s planning on it.

None of this will change the Kaine, Clinton insistence that we be ashamed of America. Instead of being ashamed of Trump, we should be ashamed that so many of us are willing to buy into their anti-American values.

This campaign season is going to end with millions taking the cowardly big government route. They will sell out to snake oil salesmen Clinton and Kaine.

Millions more will succumb to the lure of misplaced nationalism with hopes of restoring greatness proffered by a celebrity businessman.

This presidential race isn’t about choosing a leader. It’s a flea market, cheap and sleazy. We have no choice but to buy what is offered and will wear that choice when November 8 is behind us.

Like all flea markets what is for sale isn’t new and it’s not very good. Public anger about the candidates shows that we take this sorry farce a lot more seriously than we should, considering the GOP occupies the real seat of power in the House. 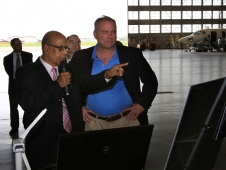 Kaine, Clinton are ashamed of America

There is a difference between the two tickets that sets this race apart. It’s not the Trump-Pence campaign’s nationalist appeal. It’s the progressive populism being pushed by Democrats that begs us to be ashamed of America.

Being ashamed of America is the province of Kaine and Clinton. Kaine’s debate performance on Tuesday night was an appalling display that should have had Hillary Clinton pounding her fists on the wall. The Virginia senator epitomized the overweening arrogance of the left that has permeated its negative take on America throughout this race.

Unlike Trump, Kaine and Clinton are professional politicians. They are more than adept at distorting what is happening to the country.

Black Lives Matter is still at the forefront of urban rabble rousing. The violence that comes from irresponsible charges of racial intolerance is something the left eagerly promotes with no regard for the consequences.

Kaine is no stranger to this negative take on America. He has urged us to:

focus on dismantling the institutional systems that have adversely hindered African American progress.1

He reminds us of past injustice:

The four hundred-year history of African Americans is full of tragedies like slavery. Those horrors have shaped the black experience in America and should be remembered as moral catastrophes.2

Yes, they should be remembered, but it is an affront to use slavery or ill-defined “horrors” to manipulate us into feeling ashamed of America. We can only pay so much to Democrats to set things right, though with Clinton and Kaine we will never pay enough.

How much more should we give the undocumented?

The health care debate isn’t dead. Not everyone receives taxpayer-paid medical care quite yet.

California’s foot in the door push to give Obamacare to illegals threatens a new round of taxpayer giveaways. Politicians are no strangers to violating promises and the historic promise on health care has long been forgotten.

Letting illegals stay in the U.S. should be giveaway enough, but even Obama’s lax enforcement doesn’t satisfy Kaine. In a June 2016 letter to the president he turned Central American refugees into a problem for U.S. taxpayers:

Immigration raids create fear and insecurity among immigrant communities in the United States. They will deter students from attending school and parents from seeking medical care, but they will not deter terrified mothers and children from fleeing life-threatening violence in their homelands.3

Raids will deter illegals from partaking in the benefits of citizenship. They won’t stop Clinton and Kaine from trying to make us ashamed of America for not giving them everything we as citizens are entitled to.

Obama could have clamped down harder. Kaine and Clinton won’t clamp down at all.

We have a new liberal dialogue on the tax code. Starting with Donald Trump it is now mandatory for high earners to hand more of their income to the government than the law requires. Democrats want us to be ashamed of America because wealth tramples need even though the need being ignored is a liberal lust for money that can never be satiated.

Big difference? Being ashamed of America.

Asking us to be ashamed of America is the big difference between the Clinton and Kaine road show and what Trump and Pence are peddling. Democrats appeal to the lowest, greediest populist denominator. Their reasonable-sounding message strikes down everything this country was founded on, from relief from unfair taxation to defending our sovereignty.

In return we are willing to give up the public trust by voting for someone who admits transgressions in political office and a partner who displayed amazing intolerance in what should have been a civil debate.

Clinton and Kaine ask us to condemn our history and the law because they need an enemy and will stop at nothing to create one. If there is a reason to be ashamed of America it is because we created these two monsters and will likely put them in charge of the country.