Home » Elections » Why Trust Clinton? You Don’t Have a Choice.

I am not going to waste anybody’s time going on about the Clinton-Comey-Lynch circus. We knew how it was going to turn out. Paul Ryan’s protests won’t change anything. We knew that the GOP House would be outraged. Nothing will come of that either, except for another opportunity to see how things work when the cards are stacked. Does it matter? The country is ready to trust Hillary Clinton. Some will do it voluntarily. Some of us don’t have a choice.

The offensive thing about placing trust in Clinton is that she doesn’t have to earn it. Quite the contrary. Our country is ready to hand it to her even though she has been waving red flags in our faces for years.

It seems that we simply don’t care.

Are we that desperate for an untrustworthy, phony progressive leader? 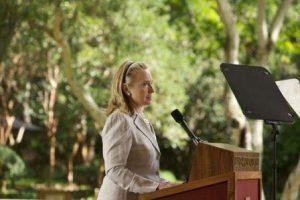 How many times has Obama schooled us in trust? Communities have to be able to trust the police. Middle Class Americans have to be able to trust our financial advisors and the banking industry. Even the Internet1 and science2 deserve our trust. Some of this has at least a grain of truth. We have to be able to put our trust in something. There hasn’t been much to choose from. That doesn’t mean we should trust Clinton, who we have already been warned about, but that is what the American people are preparing to do.

Placing trust in Hillary Clinton is a ridiculous leap of faith. There is absolutely no reason to expect that trust will be rewarded or that we can suddenly start believing what she says. Clinton claims that trust is a two-way street.3 As we found out from FBI Director Comey, that street runs uphill for her and downhill for anyone stupid enough to believe her.

Like the Benghazi scandal, the email server scandal stank to high heaven from the very first day it hit the headlines. I don’t know if Hillary reads Shakespeare. If she does, maybe she knows the line about the lady protesting too much. When a politician does that we know there is a credibility issue. Don’t forget, her husband helped teach us what honesty and integrity mean at the highest levels of public office.

President Obama embarrassed himself by chanting Hillary! repeatedly during a campaign appearance on July 5. He claimed that:

…my faith in Hillary Clinton has always been rewarded.”4

He also talked about “basic bonds of trust,”5 but didn’t mention the two big Clinton scandals that took place under his watch. You can bet Obama is happy she’s not working for him now.

You don’t have a choice, so you better have faith

We have to trust Clinton. We don’t have a choice. You might think we do, but we don’t.

There are two types of Americans who will put their faith and trust in Hillary. The first group is the foolish one, the people who believe that she’s some sort of progressive messiah who will, unlike Obama, pull off the impossible and make their lives better.

The other group will vote for Donald Trump or whatever token candidate GOP treachery manages to swap in his place. The Republican Party is going down the wrong path for 2016. The conservative public will more than likely have to bite the bullet and tolerate a Hillary Clinton presidency because our party has all but blown its chance to win this election. We will have to trust Clinton to not make things worse than Obama already has.

Why do we have to trust Clinton? Why don’t we have a choice? Because the majority rules in America and if Hillary has her way, the majority will do an unforgivably stupid thing.

Four more years of Obama politics is simply too much to bear. Having to endure it from Hillary Clinton makes it all the worse. We are going to have to trust her to not make a mockery of everything this country stands for because the stupid and deluded among us fell for her empty platitudes, half-truths, misstatements, and excuses.

Sometimes deceiving yourself is better than admitting the truth. This is one of those times.