Is America bad? Democrats want us to believe we are even though millions of illegal immigrants they lured here don’t agree. Neither do liberal hacks like Jerry Nadler (D-NY) who pushes for even more legal immigration:

Currently, more than one million individuals are stuck in the employment-based immigrant visa backlog and nearly four million are waiting for a family-based visa. These backlogs exist—and have grown longer each year—because our legal immigration system has been frozen in time since 1990.1

That’s five million people who want to be part of a country with an allegedly racist history Democrats insist is alive and thriving today:

After 250 years of slavery, 100 more years of Jim Crow, and 50 more years and counting of structural racism in our country there is plenty of blame to go around and work to be done—in all levels of government, in the board rooms, in our schools and our criminal justice system.2

What’s going on? Democrats can’t decide whether America is more useful to their party as a bad nation or a good nation so they try to have it both ways. America is bad when they need us to be. We are good when American goodness moves their agenda forward. 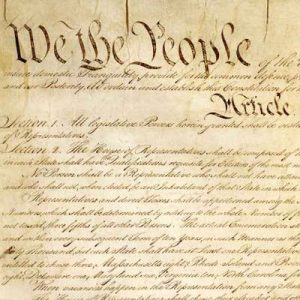 Is the Constitution racist?
It depends on what progressives want

The Constitution was the cornerstone of Democrats’ “patriotic duty” to remove Donald Trump from office:

Tonight, I have the solemn privilege of naming the Managers of the impeachment trial of Donald Trump,” said Speaker Nancy Pelosi. “It is their constitutional and patriotic duty to present the case for the President’s impeachment and removal. They will do so guided by their great love of country, determination to protect our democracy and loyalty to our oath to the Constitution.3

Blowhard Senator Chuck Schumer (D-NY) took a dimmer view of our founding document when he argued that states should not have the right to protect the vote:

In our American system, we talk a lot about “perfecting our union,” a reference to the preamble of the Constitution—a document which effectively gave only white male landowners the right to vote in our fledgling democracy.4

Yet Schumer relied on the Constitution when he introduced H.R. 1 to the Senate to “strengthen and reform our democracy:”

Senate Democrats are committed to advancing real solutions and fighting to uphold the core tenets of our constitution, which is why we are announcing today that the first bill of the new Congress will be the For the People Act. 5

Why the confusion? Why do Democrats praise the Constitution and our Founding Fathers one moment and then fall back on our allegedly immoral, racist history the next?

America treads carefully around the race card so leveraging past hurts is a useful trick for politicians determined to evade responsibility:

Chicago has its own history of racial violence, including the race riots of 1919 and violent attacks on a 1966 anti-segregation protest led by Dr. King. There were also decades of economic suppression, including redlining and restrictive covenants, and other policy and planning mandates that succeeded in segregating and isolating communities of color.6

That was from Chicago Mayor Lori Lightfoot. She recently turned racism into her city’s public health crisis because she can’t stop black Chicagoans from killing black Chicagoans. This is the epitome of self-interested cynicism. The current leftist storyline makes it easy and convenient to blame everything bad that happens on the past instead of accepting responsibility for the stupidity created by liberal politics in the present.

Is America bad? No, but it doesn’t matter.

The Biden administration resorted to a favorite Obama strategy when it presented Georgia with a federal lawsuit for violating his party’s progressive principles. Democrats’ efforts to seize the vote for themselves brought this assault on a state that refused to agree that the sanctity of the franchise is not worth protecting.

I noted that our progress on protecting voting rights, especially for black Americans and people of color, has never been steady.7

Then he turned the ceremonies over to Assistant AG Kristen Clarke, a Biden appointee known for her own past history of espousing black genetic superiority. Clarke vowed to defend the Constitution:

The Civil Rights Division stands ready to protect the constitutionally guaranteed voting rights of Americans in Georgia and wherever else those rights may be threatened in our country. 8

In all the excitement she forgot she was also supporting the 39 men who signed the document granting the rights she vows to protect:

How can you make an argument against racism using a document that your rhetoric defines as racist? You can’t, but Washington progressives are all powerful and their base eagerly laps up their nonsense so they don’t have to care.

Democrats have a problem with the Constitution

It is incredibly self-serving and hypocritical for Democrats to back an extreme anti-racist narrative that by definition makes them part of the problem. Most white guilt liberals will talk their way around this, as if being reborn into wokeness makes them morally exempt once they have publicly pilloried themselves. Liberal lawmakers and public officials just charge ahead because they know anti-American bigotry is a hot item they will get away with.

There are points to score and fame to be sought by rooting out little known examples of how badly America’s history treated non-whites. That doesn’t mean the perpetrators aren’t useful to the left. Even the Founding Fathers can be reimagined when it comes to something as important to the Democrat Party’s future as Washington D.C. statehood.

Bowser: founders intended for D.C. to be a state

During remarks in support of the Washington, D.C. Admission Act Mayor Muriel Bowser turned to America’s founders for support:

Today, I come to urge this committee and this Congress to move beyond the tired, non-factual anti-DC Statehood rhetoric and extend full democracy to the residents of the District of Columbia as the founding fathers intended.10

The simple fact is, denying American citizens a vote in the body that taxes them goes against the founding principles of this great nation.11

The dialogue was different when Detroit raised the issue of reparations. The city council cited the National African American Reparations Commission “Preliminary Reparations Program” which takes a very different view of America’s founders:

A more perfect union must be predicated on a new covenant which acknowledges the crimes against humanity committed by European colonialists, the “founding fathers” of this nation and their progeny, and the granting of reparations as restitution to repair and heal the damages done to Native people and Africans.12

Norton relies on the Constitution

D.C. statehood has both the facts and the Constitution on its side. The Constitution does not establish any prerequisites for new states, but Congress has generally considered three factors in admission decisions: resources and population, support for statehood and commitment to democracy.13

227 House Democrats signed on to cosponsor H.R. 51 based on a document that is increasingly under scrutiny by leftist ideologues who seek fame by pointing fingers at America. Politico published a proposal by Ibram X. Kendi (“How to Be an Antiracist”) to amend the Constitution to make racial inequity and “racist ideas” by public officials unconstitutional. 14 An editorial in The Hill by a University of Texas constitutional law professor suggests we “update the Constitution to reflect America’s modern values of equality and inclusion.”15

Instead of destroying our founding document with progressive guidelines for a better America for Democrats and the radical left we can simply acknowledge that we are a complex nation with a difficult past that we have in large part overcome. America is not bad. We aren’t perfect either, but there is no better country on the face of the earth. Just ask the millions of illegals Democrats are welcoming with open arms. America is where they want to be.

UPDATE July 5, 2021: Waters throws the anti-founding card on the Fourth of July

Is no one paying attention to Maxine Waters? She seems desperate for attention. According to The Daily Caller she attacked the Declaration of Independence on the Fourth with a Tweet containing three words she will be remembered for and not in a good way: “Only White Men.”16

Waters got the attention she craves. The media picked up her tweet and plastered it all over the internet. Why anyone would care about the ravings of a divisive has-been politician who provides no discernible value other than condemning America for the entertainment of the left is beyond me. She has made it clear she doesn’t like Trump supporters, Republicans, and now apparently white men, either. Bitter and angry is no way to go through your golden years, Maxine, but if it gets you some notoriety with people like yourself who don’t like our country so be it.

It’s no surprise that the Declaration of Independence is under fire. We should read it more often if only to remind ourselves how important it is to resist the kind of tyranny Waters and her party are scrabbling to inflict on Americans 250 years after we banished the British Empire.

It’s time for good Americans to say no to the race card no matter how many times left wing hacks like Maxine Waters slaps it down on the table. We know who we are. America is not bad, but that doesn’t guarantee we will be governed by good people.

1“Chairman Nadler Statement for Subcommittee Hearing on “Why Don’t They Just Get in Line?’ Barriers to Legal Immigration.” judiciary.house.gov. April 28, 2021. https://judiciary.house.gov/news/documentsingle.aspx?DocumentID=4534, retrieved June 27, 2021.

2“Chairman Nadler Statement for Hearing on “Diversity in America: The Representation of People of Color in the Media.” nadler.house.gov. September 24, 2020. https://nadler.house.gov/news/documentsingle.aspx?DocumentID=394434, retrieved July 1, 2021.