Don’t thank God. Give thanks to Speaker Pelosi. She is hard at work defending America. The rest of Washington may be infested by hypocrites, greed heads, right wing radicals, left wing extremists, babbling idiots, career hangers-on, and every other kind of undesirable political animal imaginable, but at least we can be thankful that there is one person in charge we can rely on with no equivocation.

For example, just this week Speaker Pelosi took a confusing federal court decision that didn’t go well for President Trump and made it clear and understandable for every American:

The Courts have been clear: the President’s insistence that he is above the law is an offense to our Constitution and to every American.1

There you have it. In truth I never felt offended, but if Ms. Pelosi says I should be, who am I to argue? I’m just another deplorable Republican that relies on the speaker and her party to show me what’s right. 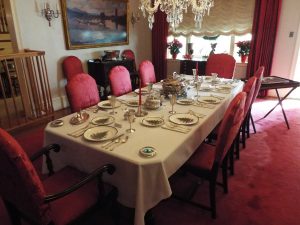 When you give thanks,
remember who comes first
NPS Photo

Divisive politics can be destructive, so it’s important for us to heed Pelosi’s words at a recent “Defend American Democracy Press Event” and remember that patriotism is what counts:

We all take an oath to protect and defend the Constitution of the United States. This isn’t about politics. It’s not about Democrats or Republicans. It’s not about partisanship. This is about patriotism.2

Kamala Harris might disagree about patriotism and the president, but these are still reassuring sentiments from Pelosi. Many of us worry that what’s happening on Capitol Hill is about rabid, foaming at the mouth party loyalties and nothing else. It’s so important to remember that this is about the Constitution and not just the Democratic Party that it’s worth repeating, which Pelosi already did at another press event in June:

As we approach the Fourth of July, we must remember the oath that we take to support and defend the Constitution and protect the American people which demands that this House of Representatives take urgent action.3

And back in March, too:

House Republicans will have to choose between their partisan hypocrisy and their sacred oath to support and defend the Constitution.4

Democrats stand for smart, strong border security that honors our oath to support and defend the Constitution, and protect the American people.5

That’s OK. Repetition is a good thing. Americans need to get the message. This isn’t about the Democratic Party. It’s about protecting the Constitution and America herself from the Republican Party and its evil demon of a president who stubbornly refuses to throw in the towel.

There is still hope. We only need to do the right thing and refuse to disagree.

How hard is that?

Bipartisanship is the ticket to defending America for and even from Americans, but before we get there we need to understand what agreement means because it’s impossible to have bipartisanship without it:

Speaker Pelosi. Well, if the Republicans are in denial about the facts, if the Republicans do not want to honor their oath of office, then I don’t think the dispute should be – we should not be characterized as partisan in any way because we are patriotic.6

Patriotism is a confusing concept for Americans to understand, especially deplorable conservative Americans. Being a patriot always implies being a Democrat. Sometimes being a patriot means bipartisanship.

It never means being a Republican.

After setting us straight on Republicans’ refusal to fulfill their sworn obligation to the people Pelosi again reaffirmed that House members:

take an oath of office to protect and defend the Constitution of the United States.7

Oath or not, it turns out that not everything is completely red and blue here. In fact, in the same appearance Pelosi also told us:

Except when it comes to gun violence:

Our message to Mitch McConnell, as we delivered again our poster, his reflection: as you look yourself in the mirror, why do you think your political survival is more important than the survival of our children?9

Bipartisanship and Republicans saying no to the lives of children is a lot to process in one press conference, but Pelosi is a pro at survival. She has been around for a long time, so we have to trust that somehow this all makes sense. Even though it seems that political survival guides everything that happens on Capitol Hill and that money is all that counts, we should trust her many, many years of experience and know in our hearts that politics never comes before children, even if all we’re offering them is lip service.

We all know that defending America also comes before politics. Sometimes doing the right thing in service to this great country means making some hard choices. Sometimes you have to say and do things not everyone will agree with. Democrats are fortunate in this regard because they are always right. They do an exemplary job of marginalizing Republicans and their deplorable base that doesn’t have America’s best interests at heart.

This is an important thing to keep in mind as impeachment hearings come to an end and we look forward to House Democrats’ next move to defend America and the Constitution. No matter the consequences, they have the duty to step up for the people. As Pelosi reminds us, Republicans have no regard for America or anything it stands for:

Republicans in Congress and the White House have abandoned their responsibility to protect our most cherished rights. From attacks on the LGBTQ community, transgendered members of the military, communities of color and our proud immigrant heritage, Republicans continue to undermine the human and civil rights of individuals across the country. Democrats celebrate the beauty, vibrancy and strength of our nation’s diversity and will always fight against racism, xenophobia, acts of hate and ugly, divisive political rhetoric.10

We’re lucky she can make sense of all this confusion. There are so many pressure groups, minorities, and special interests to appease it’s hard to keep track, especially when their numbers are so small. One of these groups could even be thrown out of the country if we enforce the law. What’s a decent, law-abiding American to think of that?

Democrats and a willing federal judiciary deserve thanks for making sure it won’t get that far. Together they will keep us on the straight and narrow even when every instinct, every fact, and history tells us we are doing the wrong thing.

Give thanks and defend the single most important thing in America

Americans deserve a party we can count on to protect us.

On this day of giving thanks, let us set aside our disagreements and seek out areas of common purpose, whether in charting a course of justice for immigrants or ministering to the poor, educating our children or curing disease.11

That was seven years ago. Not much has changed, except for the urgency to get rid of America’s greatest threat: a Republican president.

Give thanks to Speaker Pelosi for this one most important thing

Whether you are sitting at your holiday table, or watching the requisite post-gluttony football games, or out spending more money than you have for Christmas and worrying how you will pay the tab, please keep House Speaker Pelosi in your thoughts. We should all give thanks to her and to our Democratic House for defending America first and reminding us what’s most important: Democrats. Lots and lots of Democrats.