When Democrats fall back on America’s founding principles to justify their anger and frustration the words ring hollow. The usual political hypocrisy is acceptable and expected and we hear it from both sides, but do liberal lawmakers think we are so unschooled that we can’t see how ridiculous they sound when they turn to the Founding Fathers for support?

Defending American Democracy is a popular call to action thanks to the Mueller investigation. It’s easy to toss out words like “Constitution” and “principles” even though both have questionable influence on what the new House is up to. Just because you can say “founding principles” doesn’t mean they make sense or even that you understand what you are saying. Here are two recent example of how Democrats get our nation’s founding very, very wrong. 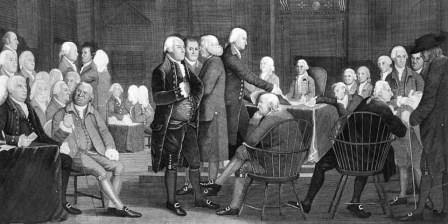 Founding principles: only who gets to vote?

When the House pounced on Rep. Steve King (R-IA) for admittedly astounding public remarks that stray into conservative fringe territory members failed to consider what our Founders cooked up when they let states set the rules for voting.

founding principles of our Nation and our rich history of diversity and tolerance of those whose backgrounds and beliefs have made America the envy of the world.1

Apparently the Democrats and two Republicans who sponsored this censure measure because of Rep. King’s alleged white supremacist comments forgot what our founding principles meant for the vote. The Founders let states decide who got to vote and that meant white men:

By about 1860, most white men without property were enfranchised. But African Americans, women, Native Americans, non-English speakers, and citizens between the ages of 18 and 21 had to fight for the right to vote in this country.2

No women. No minorities.

The Founders took a very non-inclusive, non-diverse stance when they designed a system that inevitably gave representation to white males with property. Is this what House members mean by our founding principles, or are they so excited to have another reason to talk about white supremacy that they forgot what they learned in school?

If I was Nancy Pelosi I would be embarrassed.

As worried as Democrats claim to be about Russian interference with our democracy, they don’t seem to have a clue about the misuse of the U.S. Census and how it impacts our representative government.

The Census Bureau explains the Constitution’s directive on a national census:

The Founders of our fledgling nation had a bold and ambitious plan to empower the people over their new government. The plan was to count every person living in the newly created United States of America, and to use that count to determine representation in the Congress.3

The genius of the Founders was taking a tool of government and making it a tool of political empowerment for the governed over their government.4

Pelosi cheered a New York judge’s decision to block a citizenship question on the Census:

This ruling honors the vision of our Founders and the letter of the Constitution, and represents a major victory for the rule of law and the American people.5

The Census was a tool to dole out representation in our government, so it is absolutely appalling that a speaker of the House argues in favor of giving illegal non-citizens a voice in our democracy because it honors our founding. If anything, this is an enormous slap in the face to those who drafted the Constitution and could never have envisioned the partisan lunacy that governs who should have a voice in Washington.

In the interest of fairness

Democrats must assume when they wave the Constitution and our founding principles in our face that we won’t remember what we learned in Government 101. Diversity, tolerance, and voting rights were foreign concepts that did not exist in the world of America’s Founders.

That doesn’t mean what they believed was right, but it does show why politicians should not reinvent history to suit the needs of contemporary American government.

For those liberal lawmakers who forget what they learned in school and for those who never went to class, our government has a wealth of easy to understand images online to show just who the Founding Fathers were. Start here, with the “Framers of the Constitution.”

UPDATE January 20, 2019: willingness to negotiate is also a founding principle

Short of an overwhelming congressional majority by the party doing the drafting we could not write the Constitution today. Congress is incapable of reaching agreement on so much as a sentence of a document of this importance.

Willingness to negotiate is not something we traditionally consider to be an American value. It should be. The Founders achieved what is absolutely impossible by today’s standards.
House Speaker Pelosi’s response to Trump’s Saturday offer on border security is a picture perfect example of how partisanship will destroy what the Founders built. She rejected the proposal and his fix for DACA recipients and children in harm’s way “in advance of the president’s address:”6

Pelosi based her refusal to negotiate on “initial reports,” not his actual words:

Unfortunately, initial reports make clear that his proposal is a compilation of several previously rejected initiatives, each of which is unacceptable and in total, do not represent a good faith effort to restore certainty to people’s lives.7

That’s a sad statement from a politician who falls back on our founding principles but refuses to honor one of the strongest pillars of our representative government: the willingness to see reason, sit down, and negotiate.

2. “The Founders and the Vote.” Elections… the American Way. https://www.loc.gov/teachers/classroommaterials/presentationsandactivities/presentations/elections/founders-and-the-vote.html, retrieved January 16, 2019.