When we give money to other countries through USAID our goal is to make it difficult for foreign governments to exploit despair.

Despair is dangerous — while poverty does not cause violent extremism, it creates conditions that extremists can exploit.1

The United States is not a third world country. Quite the opposite is true, though you wouldn’t always know it from the bad press we give ourselves.

How do we reconcile our objectives and the money we spend in the developing world with the unholy mess that politics creates in our own country? 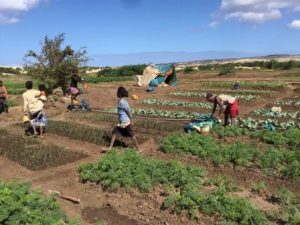 Exploit despair at home and get a seat in Congress

American extremists come in many flavors. They will exploit despair even if they have to create it to get what they want.

Yes, there is despair here, but not at the level the new breed of Democrat wants us to take responsibility for.

USAID’s description of what we try to fix with money from U.S. taxpayers sounds uncomfortably like us:

Countries that have ineffective government institutions, rampant corruption and weak rule of law have a 30-to-45 percent higher risk of civil war and higher risk of extreme criminal violence than other developing countries.2

We haven’t worked ourselves up to another civil war just yet. Calls for Trump’s impeachment and unruly, even violent confrontations at political rallies set the stage for extremism to gain a foothold, but more often than not it is so cleverly cloaked we don’t see it for what it is. Politicians are very skilled at pointing us in the direction of hope while they profit from despair.

Health care despair: are we really worse than the Third World?

Health care is one of our biggest bargaining chips.

We pride ourselves on taking care of the medical needs of people overseas.

Through efforts in family planning, maternal and child health, malaria, and nutrition, USAID is working to prevent child and maternal deaths. USAID’s maternal and child survival programs are concentrated in 25 focus countries with the highest need, demonstrable commitment, and the potential to leverage resources from the public and private sectors to improve health outcomes.3

Things aren’t so rosy here at home. The same party that forced government health care and the expansion of Medicaid now wants Medicare for All because we still haven’t done enough.

Not only are we accused of selling out breastfeeding mothers,4 according to Congresswoman Robin Kelly (D-IL) hundreds of women in the U.S. die every year from preventable pregnancy complications.5

This looks like a tiny foot in the door for Medicare for All. Kelly signed on as a cosponsor to that idea. Her party’s failure to create affordable health care aside, another option would be to stop blaming American health care and start retrieving lost Medicaid money. The program has a 10.1% improper payment rate, $36.7 billion as of November 20178 because of monetary losses including “no or insufficient medical documentation” and “non-compliance with provider screening and NPA requirements.”9

So we waste tens of billions of dollars on Medicaid. According to Kelly we don’t spend enough to keep 350 pregnant Americans from dying preventable deaths.10 The progressive fix is to fund a full year of coverage to protect people who aren’t pregnant.

Does any of this make sense, or are we talking about another extreme solution to a problem created by politics and ineffective government?

Poverty and despair in America: the never ending saga

The health care mess doesn’t hold a candle to our war on poverty.

Ending poverty once and for all has been the left-wing tune ever since Lyndon Johnson told us:

Our aim is not only to relieve the symptom of poverty, but to cure it and, above all, to prevent it. No single piece of legislation, however, is going to suffice.11

Over half a century, 92 programs, and $799 billion in annual anti-poverty spending later, 12 poverty and despair are still with us. Democrats want to start over, beginning with shame and blame for the existence of wealth that hasn’t been taxed away:

We are the richest country in the world at the richest point in our history – we can achieve this. We just need to ask CEOs and the huge corporations they run to pay their fair share.13

To jump start a new war on economic inequality the Congressional Progressive Caucus has a plan to cut poverty in half in ten years. The extremist-sounding “Roadmap for the Resistance” includes everything from minimum wage hikes to a 4% federal pay increase, paid leave, unemployment benefits, collective bargaining, and worker protection agencies.14

Someone has to pay for this, which brings us back to blaming the wealth that has allowed Democrats to spend on our endless war on poverty and to demand even more spending while the unemployment rate drops to historic lows.

Does any of this make sense?

The problem with progressive anti-poverty solutions is that they still rely on government to do the job. Arguments have shifted from welfare to mandatory living wages and even paying employers to create jobs. Welfare has many faces, but the same argument applies that the Supreme Court once slapped on pornography: you know it when you see it. Like pornography, anti-poverty spending is ubiquitous. It never goes away.

USAID wants the recipients of foreign assistance to be independent:

Congressional nods to the nomination of a Bernie Sanders-styled socialist in New York and the solutions of contemporary progressives hint at another direction.

No end to despair in extremist USA

USAID tells us that:

The purpose of foreign aid is to end the need for its existence.16

The same goes for many types of helping hands here at home. We should question what our money is helping. Are we benefiting people by spending too much on health care and the endless war on poverty when the economy tells us it is time for self-reliance, or are we helping politicians who reinvent the same story year after year with nothing to say other than “we need to spend more money.”

5. ”Hundreds of American Mothers Are Dying, It’s Time for Congress to Do Something about It,” says Congresswoman Robin Kelly.” Robin Kelly. May 9, 2018. https://robinkelly.house.gov/media-center/press-releases/hundreds-of-american-mothers-are-dying-it-s-time-for-congress-to-
do, retrieved August 15, 2018.

10. Kelly, ”Hundreds of American Mothers Are Dying, It’s Time for Congress to Do Something about It,” says Congresswoman Robin Kelly.” op. cit.