What do a death row inmate and a Democrat have in common? When the end is near they do unexpected things. Killers find God. Desperate Democrats worry about spending too much. That’s the kind of absurdity we are faced with as Congress fights over the Trump wall. The cost to taxpayers is suddenly a worry for Capitol Hill spenders who usually regard Americans as a convenience to fund their agenda. This time that agenda means doing anything humanly possible to open up the U.S to unfettered, unregulated immigration as liberal policies of the past eight years come to a screeching halt. 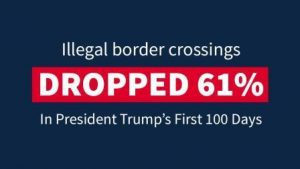 Cost to taxpayers is worth it
Courtesy Whitehouse.gov

No wall cost to taxpayers? Obedience and surrender.

Every objection imaginable is being raised for why we shouldn’t put up a barrier to illegal border crossings. The cost to taxpayers is near the top of the list. It sounds better than the truth.

The wall is not what matters. What a wall means is what counts. After years of luring Mexican and Latin American citizens to the U.S. with taxpayer-paid perks like free education we finally get to say no.

If we let Trump’s wall go, the real cost to taxpayers is obedience to Democrats who will stop at nothing to build their base. Demonstrations and violence prove that political power is not restricted to the vote. Democrats can use their illegal population and have an impact without the voting booth so the more the numbers grow, the better.

After eight years of Obama the concerns we are hearing sound outrageously hypocritical.

Forget a government shutdown. It’s a ruse, part of the Capitol Hill playbook. Tearing apart Trump immigration policy has been in the works for much longer than the current budget war. Lawmakers like California Senator Kamala Harris voiced concerns:

The executive order also calls for the construction of new detention facilities at our southern border, which will likely house nonviolent undocumented immigrants at great expense to the taxpayer.1

It’s also very costly to lock up the criminals we let in. We are better off stopping them at the border. Democrats will never get over Trump telling America the truth about the immigrant rapists and murderers who come here. When we catch these people, who can easily return after they are removed, it costs a fortune to incarcerate them. Even worse, we can’t repair some of the damage they do. You can’t erase a rape. Murder is irreversible.

Instead of wasting time and taxpayer dollars on an ineffective wall, I hope the president, and others in Congress will join me in these efforts in the months to come.2

The efforts he referred to are for “fair and humane” immigration reform.3 We know what that means. Even Republicans are buying into the idea with their own immigration legislation.

The wasteful spending fallback ignores the fact that improper payments alone waste billions annually. This is about agenda, though, and not the cost to taxpayers. The waste of revenue is just an excuse because what Democrats really want is too appalling to admit.

Yes, sanctuary cities are a cost to taxpayers

Tuesday’s court decision out of San Francisco blocked Trump’s plan to halt taxpayer money flowing to sanctuary cities. Before that happened the dispute became so ridiculous that Democrats were proposing bills to make sure these cities get federal money without having to abide by the law.

We also have H.R.748, the “Safeguarding Sanctuary Cities Act of 2017,”6 to block federal efforts to defund cities that ignore ICE detainers. In the Senate there is S.415, “A bill to nullify the effect of the recent Executive order that makes the vast majority of unauthorized individuals priorities for removal and aims to withhold critical Federal funding to sanctuary cities.” That’s a lot of words and twenty-one Democratic Senators who signed on.7

Back in the days when a comprehensive immigration bill was a possibility Senator Chuck Schumer proposed S.744, the Border Security, Economic Opportunity, and Immigration Modernization Act. The cost to taxpayers didn’t matter enough to stop $1.5 billion for “Jobs for Youth”8 tucked into the bill.

The border wall is impractical and unpopular, a pointless burden that this administration is trying to pay for by taking money away from the programs that actually keep Americans safe.9

We can only hope these vital security programs don’t include summer jobs.

How far will surrender to Democrats go?

No wall arguments would make a lot more sense if Democrats had the honesty to admit what they really want: more support for Democrats, the louder and more public the better. If there is a bill to grant illegals the vote I haven’t found it yet, but rest assured it’s coming. Bit by bit Democrats are good at getting what they want. They did a good job of loosening us up during the Obama years. Now we finally have a chance to say no.

The real cost to taxpayers of not building Trump’s wall is admitting obedience to whatever dangerous direction Democrats want to take the country. This is about their future. Don’t think for a moment that the cost to taxpayers of having their way matters, whether that cost is rampant spending or being victimized by criminal aliens.

UPDATE April 29, 2017: Sean Spicer was asked during an April 24, 2017 press conference whether the wall was a “deal breaker”10 for President Trump. The press secretary wouldn’t comment, but by the end of the week removing the funding was a deal maker for Republicans.

Even with a GOP majority Democrats still command our obedience.

UPDATE May 1, 2017: The spending deal is struck. Sanctuary cities will get their money. There will be no funding for the border wall. Democrats will wear ever crime committed against an American by an illegal immigrant. They got what they wanted. Law-abiding, taxpaying citizens will be the ones who pay the price for being obedient to their demands.

7. “S.415 – A bill to nullify the effect of the recent Executive order that makes the vast majority of unauthorized individuals priorities for removal and aims to withhold critical Federal funding to sanctuary cities.” Congress.gov. https://www.congress.gov/bill/115th-congress/senate-bill/415/text?q=%7B%22search%22%3A%5B%22sanctuary+cities%22%5D%7D&r=3, April 26, 2017.