Is there a better reason to build a border wall than the data on illegal reentry of deported aliens? The numbers are going down, but that didn’t stop 15,744 individuals from being convicted of illegal reentry in 2016. 97.7% were sentenced to prison for an average of 14 months.1

We can’t stop deported aliens from coming back to the U.S. That means taxpayers are punished for illegal reentry. How? We pay to lock these offenders up.

Is it impossible to keep them out of our country? 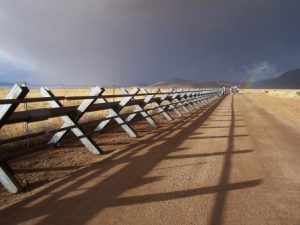 Illegal reentry is one part of a big problem

Federal immigration figures on illegal reentry should sound alarms. They show that even deportation is just a partial fix.

A recent case involved a man deported years ago who came back and was eventually charged with illegal voting in two elections and more than $12 million in tax fraud.

Do these people get smarter every time they come back? The bigger question is how many are here causing problems that we don’t know about.

It’s not as if Congress hasn’t noticed there is a problem:

Congressman Steve King released the following statement after introducing H.R. 361, ‘Kate’s Law’ to the 115th Congress. Named in honor of Kate Steinle, a 32-year-old woman tragically shot and killed by an illegal alien who had several felony convictions and had been deported from the United States five times …2

“Kate’s Law” was also proposed by Senator Ted Cruz (R-TX) in October 20153 and Rep. Matt Salmon (R-AZ) with H.R. 3011 in July 2015.4 The problem with this solution is that the punishment for illegal reentry is prison. Rep. King’s version changes the Immigration and Nationality Act to add 5-year mandatory minimums.5

That means deported immigrants punish taxpayers while they are living here and then they punish us again when they are jailed by our government.

Does this make sense? It doesn’t when incarceration costs the equivalent of a middle class income.

Illegal reentry penalties: get out your wallet

Attorney General Sessions did not ignore the illegal reentry problem during remarks in Arizona yesterday:

Further, where an alien has unlawfully entered the country, which is a misdemeanor, that alien will now be charged with a felony if they unlawfully enter or attempt enter a second time and certain aggravating circumstances are present.7

He also pointed out that document fraud and identity theft, crimes which go hand in hand with illegal immigration, carry a two-year mandatory minimum.8

Is prison a good solution? It certainly isn’t cost effective. The average annual price tag for locking up an inmate in a federal prison in 2016 was $31,977.65.9 That’s a lot of cash for taxpayers to shell out to house prisoners we already kicked out. In fact, it’s close to what Fight for $15 protesters consider a fair annual income.

States get pinched, so we pay twice

Taxpayers aren’t just being pinched at the federal level. The State Criminal Alien Assistance Program (SCAAP) helped pay states and localities to jail illegal aliens. The Federal Government is charged with securing the borders, so it only seems fair that it help foot the bill when the system fails us.

In the past most SCAAP funding went to salaries for correctional personnel. $210 million was appropriated in 2016,10 but the program has not been reauthorized for this year. That is an issue with some lawmakers including Arizona Senators Jeff Flake and John McCain, who introduced a bill to bring the program back. McCain remarked:

This legislation would ensure that states and local governments are reimbursed for housing and medical expenses for criminal aliens, ensuring Arizona taxpayers do not bear the full brunt of our national priority to secure the border.11

Arizona is close to the Southwest border, so the state will take a beating from illegals whether they are here for the first time or on a post-deportation visit. Voices in Congress are already howling about the potential cost to their constituents of President Trump’s border wall. Are they betting taxpayers haven’t figured out what else they are already paying towards a problem locking up illegals won’t solve?

The debate over whether taxpayers should pay for a border wall will rage on Capitol Hill as long as it takes to ensure nothing gets done.

Democrats including Illinois Senator Tammy Duckworth sponsored a bill she claims will protect our wallets and our lives:

Hard-working Americans should not be forced to pay billions of dollars for an ineffective border wall as life-saving services are being cut and vital programs are being eliminated,” Senator Duckworth said.12

We shouldn’t be forced to pay to imprison deported or other criminal aliens that Duckworth and her colleagues are unwilling or unable to keep out of the country.

98.7% of deported aliens who reenter are Hispanic.13 We know where the barrier needs to go. If Democrats have a better way to shut down illegal entry into the United States, we’re waiting to hear it.

Taking time for a photo op at a wall is not the same as taking time to understand how that wall arbitrarily splits the desert landscape, blocking local wildlife from their natural migration patterns, and scarring the ecology of the entire region.14

If it blocks natural migration back to the U.S., then that’s the wall for us.