I am not surprised that Jimmy Carter is attending the inauguration. Whether or not you agree with his politics it’s hard to argue that the man has integrity. He is also wise enough to know that turning his back on America’s leader is a foolish thing to do. This isn’t the time to show contempt for President Trump. It’s time to show the world we can recover from a hateful, contentious election we should be ashamed of. 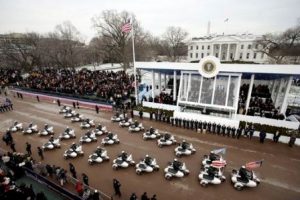 Why so much contempt for Trump?
Last GOP inauguration was respectful.
White House photo by Paul Morse

Whether protecting the sanctity of the inauguration with a biker ‘wall of meat’1 sends the right message remains to be seen. It is certainly a fitting counterpoint to the very public contempt for America’s new president.

The pre-MLK holiday John Lewis flap is just another example of the utter disregard for anyone who even questions standing in the way of what Obama started and never finished. For now Democrats are occupied pinning their troubles on Russia, but they are never going to stop dreaming up excuses to undermine this president’s legitimacy. In many ways Trump is their worst nightmare. He is a Republican white guy who represents everything the diversity-obsessed culture the party panders to despises. Trump will speak his mind with no regard to the political niceties that maintain Washington’s comfortable inertia. That’s a scary thing for a Congress that uses gridlock as an excuse to do nothing.

If the nation had shown Obama the same contempt that has descended on Trump the outrage would have found a place in the history books. Obviously we don’t have to worry about that because Trump’s skin color isn’t an issue. It certainly won’t protect him. Instead, he needs to be concerned with how many in his own party will turn tail and flee when the going gets really tough and the other side of the aisle begins to look like sanctuary.

Recrimination and stupidity are the real threats

We’ve heard about threats to democracy. Americans were warned about a Republican “dangerous agenda”2 to fix our new, unaffordable health care system. Threatening the people is something we expect. It’s how politics works, but showing the world our contempt for Trump is a different beast altogether. This is a bigger threat than anything posed by the new administration or its many opponents.

Convincing the world that we not only don’t support, but have no respect for our president is a stupid move for a country that needs to repair the shambles of Obama’s foreign policy. America’s get along strategy succeeded in turning some of the world’s worst actors against us. In particular, North Korea’s nuclear program has proceeded despite a hollow assurance from Vice President Biden that the UN will take care of the problem:

Terrorism is thriving. Obama dealt our relations with Israel a blow with UN complicity. The Cold War was reignited because Democrats needed a scapegoat for an election loss.

A world in turmoil with much of it turned against us will only be encouraged by our contempt for incoming President Trump. Nevertheless, the Democratic Party’s raison d’etre has shifted from spending money to building a wall of hate between Trump and the people. Instead of eagerly anticipating the failure of America’s leader, liberals should take Jimmy Carter’s lead. Nothing good will come from indulging disrespect, contempt, and hate for America’s president. Democrats have made their point. We get it. Time to move on.