If someone close to you has died from cancer or if you have been diagnosed, you know all too well that curing cancer is important. Cancer changes lives in ways that can never be repaired. Keeping this in mind, were you amused or offended by the newest grab from our lame duck president for more space in the history books? Calling for a “National Cancer Moonshot,” whatever that’s supposed to mean, Barack Obama wants to spend $1 billion because “with a new moonshot, America can cure cancer.”1

Unlike many agenda-laden initiatives, the goal of defeating cancer is honorable, real, and free from partisanship. Most of us will eventually have our lives violated by this horrible disease. Finding solutions to cancer is important. It should be a lot bigger priority than many of the other things the government spends our money on. That’s why attracting attention by throwing $1 billion at a cancer cure is a political stunt, not a plan. 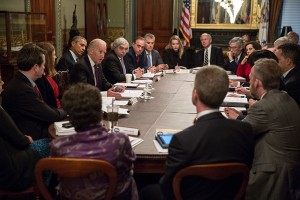 Cancer Moonshot: is this the cure?2
Photo by Pete Souza

Despite the enormous strides researchers have made, the numbers on what cancer does to us are still formidable. An estimated 1,685,210 people will receive new diagnoses this year.3 584,881 people died from cancer in 2013, according to figures the CDC released in August 2015.4

Government statistics lag a bit, but current estimates are that we shelled out $87.5 billion for cancer care in 2012.5 We plan to pay the National Cancer Institute a middling $5.21 billion in 2016.6

Does something seem out of whack here?

We are on track to spend $157 billion on cancer care annually by 2020.7 That investment only takes care of people who are already sick. It won’t give us a cure. Neither will another billion added to what we already spend on research.

Why so little? Because of another scourge we don’t have a cure for:

Cancer is important but sorry, it’s a loser.

If we really wanted to cure cancer we would be dumping the kind of investment into the cause that we spend on more headline-worthy issues. We wouldn’t be spending on things that many Americans don’t want, need, or outright object to. Why the difference?

Joe Biden was handed the cancer moonshot. His personal tragedy aside, the cancer task force is backed by the same jargon about collaboration we have heard for everything from Middle East terrorism, to the middle class, to urban activism, to cybersecurity. It is not especially awe-inspiring:

The National Cancer Moonshot will work to accelerate these research efforts and break down barriers to progress by enhancing data access, and facilitating collaborations with researchers, doctors, philanthropies, patients, and patient advocates, and biotechnology and pharmaceutical companies.8

And we’re going to continue to call on families, researchers, and physicians all across the country to join this effort and rise to the challenge.9

How many of us, including the vice president, have already been called on, rose to the challenge, and had every single one of our hopes dashed dealing with this disease?

The problem with scraping up more money for the war on cancer is that cancer spending isn’t good politics. Cancer is important, but it’s not controversial. There isn’t much to fight over. Those whose livelihoods depend on cancer are as much at risk as anyone else and would probably prefer to see it banished forever. Even Democrats and Republicans can agree it is a truly bipartisan disease that kills indiscriminately and doesn’t care about your party affiliation.

Issues that don’t incite controversy are a problem if you are a politician. We didn’t hear a lot about cancer spending in Iowa. We won’t hear it in New Hampshire or anywhere else along the campaign trail because fighting cancer is a loser issue. No one disagrees with it. It stays hidden in the background. We toss it what we can but it won’t get anyone elected. Meanwhile, hundreds of thousands of people suffer and die every year.

Pick one: a heroin addict, an illegal immigrant family, or your mother

How important is cancer? Not as important as heroin and opiate abuse, though it’s close. The politically-styled heroin epidemic merited a request for $1.1 billion.10

How about computer science? Obama’s “Computer Science for All” is asking for $4 billion,11 though when you think about it computer science is an easy thing to learn by yourself with a computer and the Internet. Do we need to spend $4 billion on that?

As much as you love your mother, when it comes to saving her life and illegal immigrants, sorry. Mom loses. The border surge deserved a presidential plea for $3.7 billion12 before it was rebuffed by the GOP.

Update February 9, 2016: Add the $1.8 billion just requested to fight the Zika virus. Zika is an emerging threat, but unlike cancer it hasn’t killed hundreds of thousands of Americans in a single year.

How about money spent on nothing? Improper payments were $124.7 billion last year, up by $19 billion.13 For all the Obama administration talk about reigning in government waste, the increase alone is 19 times what we think we should spend to jumpstart a cancer cure.

Iran? Iran gets whatever it wants, including a payment of $1.7 billion14 we are still trying to justify. Nevertheless, when it comes to cancer spending I’ll not only give the president a pass on Iran, I’ll give him credit. Cancer is important, but even cancer can’t compete with nuclear weapons.

Rather than continuing, think of the trillions that go into the federal budget. That should put $1 billion dedicated to a cancer cure in proper perspective. So does this question: if every politician in Washington was diagnosed with cancer tomorrow, how much do you think we would spend?