Home » Government Ethics » Conspiracies and Scandals » Benghazi Prosecution: Everyone Wins but the Dead

Hearings are not a trial and the Benghazi Committee’s interrogation of Hillary Clinton was not supposed to be a prosecution, so why did Chairman Trey Gowdy’s opening statement sound like it was taken from a television courtroom drama? Because this is partisan political drama as good as you are ever going to find. Everyone gets a piece of the action and everyone wins except the four dead Americans these proceedings are supposed to be all about.

Truths and questions no one will answer

The ten truths and ten questions1 Gowdy posed will never be answered to anyone’s satisfaction no matter how long this drags on. Expecting anything like closure is a lot to ask from something as politically charged as the Benghazi scandal. The good news is that both sides have the opportunity to score points while accusing the other of politicizing a tragedy. The bad news is that the country has to sit back and watch a congressional sideshow that is not going to go anywhere except the history books. The worst news is that when this is over, four Americans will still be dead without the answers about how they died that could put this scandal behind us once and for all. 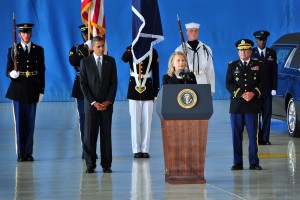 Secretary of State Clinton on lives lost in Libya2

Benghazi prosecution follies: a partisan winner for sure

The Benghazi Committee was formed a year and a half ago to investigate something that happened in 2012. Years of buildup have given both parties ample time to entrench themselves over a scandal that no longer has anything to do with murders committed by Muslim insurgents.

Instead of getting to the truth of what happened in Libya, the proceedings have shifted to prosecuting a Democratic presidential candidate without a prosecution and damning Republicans for demanding answers to something we deserve to know the truth about.

Only in Washington can this scenario be a win-win.

Benghazi prosecution is a game. This is how you play it.

Politicizing American deaths is good politics. Despite the suggestion that Democrats on the committee politicized the investigation,3 we should strive for some modicum of honesty. This whole affair is just as politicized as the other dramas that Congress orchestrates when opportunity knocks. Our attention is no longer focused on accounting for the dead. They have come to matter a lot less than political fortunes, especially Hillary Clinton’s.

A blog post on House Speaker Boehner’s website expressed surprise that Democrats aren’t playing along with the Benghazi inquiry:

But Democrats have attempted to undermine and block the Committee’s work from the start, before any of this information – including a single Clinton email – came to light. As they’ve demonstrated over the last few months, they will say anything to distract from the FBI’s investigation into Hillary’s email, and discredit the Committee’s fact-based investigation into what happened in Benghazi.4

Democrats are having some fun with this, too. Nancy Pelosi used John Boehner’s departure to score a few Benghazi points:

After GOP Leader and Speaker-in-waiting Kevin McCarthy inadvertently admitted the disturbing truth about the Select Committee to Investigate Hillary Clinton, Republicans are rushing to clean up the mess. And as a party consumed by melodrama and dysfunction, these Republicans can’t help but throwing a few elbows at their future leader in the process:5

No accountability for the dead?

Try as they might, holding this president and his administration accountable hasn’t gone very well for Republicans. This week’s decision by the Justice Department to not prosecute Lois Lerner is another predictable outcome from another scandal and more dog and pony show hearings that didn’t go anywhere.

There is never going to be a resolution to the Benghazi affair that will satisfy conservatives. Hillary Clinton is not going to be convicted of a crime. She is not going to go to jail. She will not be disgraced. What we just witnessed is as close to a prosecution as we will see. The worst thing that will happen to Clinton and the nation is that she will win in 2016 and we will waste four years trying to impeach her for the same things we aren’t going to resolve now.

The problem is not that the committee is holding hearings. The problem is that politics and the Hillary bogeyman will create the witch hunt the GOP has already been blamed for. Besides, if Hillary really is the evil political demon we keep being warned about Republican committee members are way out of their league, something we got a strong sense of from her testimony.

When this chapter eventually draws to a close, conservatives will blame Obama and Clinton for a successful cover up. Clinton’s campaign will go on, likely with a little more sympathy from supporters and possibly a few new acolytes impressed by how well she handled what was portrayed as a prosecution without a trial.

Four Americans will still be dead. We won’t have the answers the committee sought, but we never should have expected to.