We had a lot on our plate this week. Even the threat of nuclear war from Pyongyang faded away thanks to a humanitarian crisis, tax reform, health care reform, and disrespectful football players who helped make this a memorable week in politics. Where to start with the amazing things we learned? Let’s begin with an evolving disaster in Puerto Rico and go from there.

Amazing things we learned in five days or less 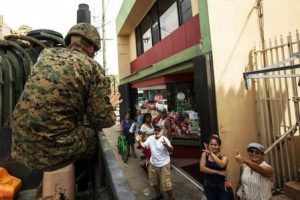 1. Puerto Rico is useful for more than fighting over its debt

Last year it was tens of billions in debt and lawmakers unhappy with the island’s “inefficient and irresponsible financial decisions.”1 We worried about bankruptcy. We’re way past that now.

Lucky Democrats have an opportunity to condemn a Hurricane Maria response that Trump is going to get blamed for no matter what he does. One day after the head of the House Democratic caucus called administration efforts for Puerto Rico “anemic,”2 party representatives ganged together to demand more:

Despite increased personnel and ongoing recovery efforts, the current response does not match the enormity of the situation” said Rep. Sires. “My colleagues and I demand that the Administration act immediately and effectively to provide the necessary supplies, personnel, and funds to our fellow Americans in Puerto Rico.”3

For Democrats every disaster has a silver lining. They sent a letter to the president on Wednesday. Now they can sit back and entertain themselves by taking potshots at a difficult, historic relief effort.

When it’s over we can proceed with that bankruptcy filing.

2. The poor had better stay that way

It’s tax reform time and that puts the poor in the spotlight. Thank God they didn’t pull themselves up by their conservative bootstraps. The poor and working class are the best argument Democrats will ever have to fight with Republicans no matter what the issue is.

Don’t expect any amazing revelations from other liberal voices. Democrats haven’t done much to help the poor and working classes except rally to their cause every time Republicans won’t agree to divest the wealthy of their assets.

When the Congressional Progressive Caucus had its say members forgot one thing:

Make no mistake, the money will not trickle down. The American people won’t settle for scraps. We will vigorously oppose this unfair giveaway and in the coming days we will work to inject fairness into this conversation.5

Haven’t the poor and working classes been settling for Democratic Party scraps for decades?

3 amazing things we learned about conservatives

Republicans have less conviction when they have to do something

Words are easy. Work is hard.

McConnell needs to go. You probably already know that. I’m not blaming him for the failure of health care in the Senate because I didn’t want it to pass anyway. Bad legislation only makes things worse. If Republicans had a good bill they could have pushed it through the House, breezed through the Senate, and slapped it on Trump’s desk for a signature to make good on a big promise.

That never happened. It’s not McConnell’s fault, or at least not entirely. Republicans talk a good line but when it comes to doing the work they have no conviction. That’s why it’s so easy for Democrats to get the upper hand time and time again.

Sports fans have a limit

Sure, the media is eager to show support for the NFL but not everyone likes to mix racial politics with their sports, especially fans who served in the military. Watch those demands for refunds on season tickets and cable subscriptions start pouring in while jerseys go up in flames on YouTube.

All we have to do is wait this one out. Protest and principle are one thing. Money is another and money always wins.

We just might have our way on immigration, after all

ICE sent a message this week: enough is enough. Officers swept through select sanctuary cities and made what sounded like lots of arrests but was really only a handful given the enormity of the problem the administration is grappling with.

Call this a shot over the bow. There is going to be outrage, anger, and calls for Congress to get that comprehensive amnesty bill passed.

DREAMers are has beens

DACA is done but don’t worry. The DREAMers will be back. There’s always next week.

In the meantime, they might want to check their criminal records in case ICE comes knocking.

When I hit “publish” yesterday morning I thought the week in politics was over and there were no more amazing things to learn. Instead of resorting to tired idioms, let’s just say it wasn’t over yet.

How low will politicians stoop to score another jab at Trump? We just found out from House Democrats who felt duty bound to slam the president despite the swift departure of HHS Secretary Price from Washington’s swamp.

Connecticut’s Rosa DeLauro accused the administration of “bringing “the swamp” closer”6 and then tossed out this off topic gem:

During his short tenure, Secretary Price wasted taxpayer dollars while undermining and sabotaging the Affordable Care Act. His actions have driven up premiums and threatened the healthcare of millions of Americans.7

At least Congresswoman DeLauro doesn’t have to worry about the Affordable Care Act. Republicans took care of that for her. Now we only have to worry about millions not being able to pay for health care because of skyrocketing premiums we can thank her party and president for.