Home » Race in America » African American Anger is About Money, Not Injustice

There is an enormous contradiction in African American anger at the institutions many in urban communities rely on to survive. The riots this week in Charlotte aren’t about police shootings or oppression. Neither were the violent outbreaks in Ferguson or Baltimore. They are about the injustice of money. How should people react when the hand that feeds also hurts?

Government gives, but there is a price

When government gives it oppresses. Whether help means safety net services for poor communities, leniency in the courts, keeping streets safe, or easy to get jobs, when government lends a hand there is a price. People are left dependent and wanting more.

Simmering African American anger because we don’t change the rules?

Police involved shootings have been a ready excuse for African American anger to erupt. The color of the officers doesn’t matter. Shootings are just an excuse. If they were the reason we would see riots in cities where black on black violence is rampant. Instead, African American anger is directed at one of the most visible institutions of government: law enforcement.

Is it the expectation of entitlement that causes people to believe that any police shooting is unjust if it involves a black person? Should different rules apply to people of color?

Different rules are what government has been teaching for decades. 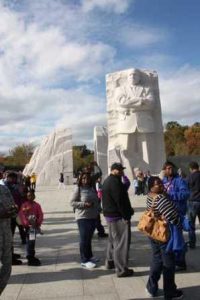 Remembering when African American anger had a purpose
Courtesy FHWA

Money is what African Americans want. Oppression is what they got.

The list of programs and initiatives many in the African American community rely on stretches back decades. Money is the fix people have been taught to expect, but there will never be enough of it to make up for the perception of injustice.

We can hire hundreds of police officers in every major city. Public coffers can flood communities with education spending. We can provide job skills training and every other trapping of a liberal social welfare state imaginable. It will never be enough because all of these things oppress. They teach people not to fend for themselves and to always expect more as the rest of society advances.

Nothing in our society is free. Depending on government to pave the way is a two way street. Giving a little does not imply an obligation to give more, even though suggestions from activists and the liberal left on how to heal urban communities always begin with spending, preferably a lot of spending.

Feeble protests and violent acting out

Protests like raised fists or refusing to stand for the national anthem are a safe way for public figures to wring some free publicity out of sensationalized racial incidents. Instead of protesting at last Monday night’s football game in Chicago, Eagles players who wanted to make a statement could have found the media spotlight another way. They could have walked kids to school in one of the city’s neighborhoods made dangerous by violence in the African American community.

That didn’t happen. I doubt their insurers would have approved.

African Americans venting their anger in Charlotte or Baltimore don’t waste time with lame, anti-American protests. They settle for the opposite of government: anarchy. Government let them down so they riot, loot, and burn. Sometimes people get hurt.

When the smoke clears we start to hear the calls for more spending.

The implications coming from some of the voices in Washington are hard to misinterpret. North Carolina Congresswoman Alma Adams issued a press release declaring:

Congresswoman Adams is continuing to monitor the situation and remains committed to working with the City of Charlotte to ensure that the Scott family and the community gets answers and justice.1

Illinois Congresswoman Tammy Duckworth, who is seeking to take a Senate seat from RINOesque Mark Kirk this fall, sent a similar message that implied injustice is systemic:

The fact is that black men are more likely to die at the hands of police than white men, and our communities and constituents demand action.2

As reported by the Chicago Tribune [link expired],3 Chicago Mayor Rahm Emanuel’s multimillion dollar plan for his broke, violent city includes hiring lots of cops and spending money on mentoring and jobs. It doesn’t address the issue African Americans are angry over: do suspects deserve a break because of their color and whatever economic deprivations they have suffered? Barack Obama has already provided an answer by commuting sentences for drug dealers whose wares generate profits people in these communities die for.

When Chicago residents pleading for relief from gun violence witness the inevitable violent confrontation with police, how long will it take for this helping hand from government to turn into an excuse for anger?

Solution to injustice will always be more money

In Chicago it’s about more cops. In Charlotte it’s about the actions of one black officer. The solution will always be the same: spend more money to appease violent, angry communities.

Charges of injustice are just a smokescreen for demands to spend. No matter how many police-involved shootings will be sensationalized, politicized, and misconstrued, money will always be the solution. That’s the real injustice.