Homeland Security must dread the release of new Government Accountability Office reports. The federal watchdog has a habit of finding chinks in the armor of agency plans to stop the bad guys. Past highlights include security technology problems at the border and trouble monitoring potentially dangerous flight school attendees post-9/11. Now we have a new TSA shocker about airline passenger screening that ferrets out suspicious behavior.

It’s not entirely fair to blame DHS or the TSA for the problems with airport screening. Politics has placed so much off limits that security gurus are forced to tiptoe around the truth. As much as we want to keep dangerous people off of airplanes and out of the country there are just too many voices screeching to the heavens, demanding that we don’t scrutinize or profile. 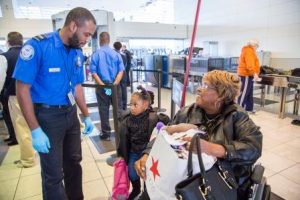 The word got out last Friday. TSA’s behavioral methods don’t have a lot of evidence or science behind them, including 28 of the 36 behavioral signs it uses to identify potential terrorists.1

These findings aren’t new. They go back to a November 2013 report and lead to the same place that eventually ended SBInet: a recommendation to watch the dollars that go into something that might not have any value.2

TSA Report is a shocker, but it’s what we asked for

Evaluated intelligence indicates that terrorist groups continue to target commercial aviation and are aggressively pursuing innovative methods to undertake their attacks, to include smuggling explosive devices in various consumer items.3

… with statements like this from ex-DNC boss Debbie Wasserman Schultz, who uses the discriminatory label “Muslim ban” instead of “security restrictions”:

The Supreme Court’s decision to allow portions of President Trump’s Muslim and refugee ban to take effect sends a terrible message to the world, does nothing to make America safer, and disregards our national values.4

This disgrace will not make our country safer. It betrays the American values those of us who served in uniform fought to defend.5

Duckworth never mentioned how many service members have died at the hands of radicals who want to kill Americans because of our religion and values. Blaming America for shunning Islam does more political damage. We do know how many could die if someone with bad intentions hops onto a commercial jetliner. Instead, we blame Trump for doing whatever it takes rather than taking a chance.

That’s where the TSA report reflects the desperate position we’ve put airline security personnel in. The problem isn’t the numbers. The problem is that we won’t permit profiling, restrict travel, or do anything else that selects for the people most likely to be terrorists.

When our values threaten Americans lives to satisfy Democratic Party bigwigs, what good are they?

TSA is hog-tied by Democrats

We could have prevented a liberal “Muslim Ban” and simply called the new travel restrictions what they are. Instead, Democrats prefer to wage war with offensive labels and inflammatory remarks.

Look to recent attacks in Europe if you don’t believe there are terrorists out there. They exist and for the most part are radicalized Muslims, but PC leftists who influence U.S. policy would rather risk lives than admit the truth. For the time being, instead of observing the obvious we are stuck with behavioral signs that may or may not work and are certainly a lot less reliable than limiting entry with common sense exceptions.