What could be worse than millions of demanding foreigners who ignore our laws, protest how we enforce them, and refuse to leave? How about American citizens and government officials who stand with them? Protests over ICE raids rounding up criminal illegals make a very disheartening statement about where our citizens place their loyalty. 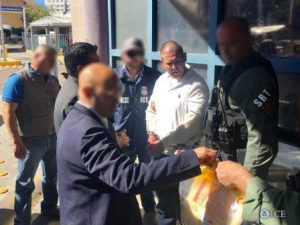 Another criminal deported to Mexico
Courtesy of ICE

Protests over ICE raids: crime is an exception to the law

While the outcry got louder over ICE’s immigration clean up, Homeland Security Secretary John Kelly told us:

Of those arrested, approximately 75 percent were criminal aliens, convicted of crimes including, but not limited to, homicide, aggravated sexual abuse, sexual assault of a minor, lewd and lascivious acts with a child, indecent liberties with a minor, drug trafficking, battery, assault, DUI and weapons charges.1

Do you believe the bad press about breaking up families? Are the protests over ICE raids justified? Here is ICE’s take on what the raids are all about.

Social Security fraud and identity theft are illegal. We spend a lot of money trying to stop the perpetrators and shut down identity mills. There is not a soul on Capitol Hill who would support these crimes, so why do members of Congress believe there should be an exception for unauthorized workers with fake Social Security numbers?

When we recently deported a Mexican woman who worked under fraudulent Social Security credentials the bar was raised again on what lawmakers think we should tolerate. California Rep. Juan Vargas was willing to look the other way:

The deportation of Guadalupe Garcia de Rayos is heartbreaking and alarming. After showing up to her regularly scheduled appointment with Immigration and Customs Enforcement, Ms. Rayos was not able to go back home with her children, instead, she was separated from her family and deported to Mexico.2

The deportation of Ms. Rayos would be a tragedy for her young family. Donald Trump is cruelly ripping a mother and a breadwinner away from her American citizen children.

Instead of focusing on improving our economy or keeping Americans safe from real danger, the Trump administration’s policies are persecuting law abiding members of the immigrant community.3

Enforcing the law against illegals is persecution? We break up families of citizens all the time when we send a mother or father to prison. Something else is going on here.

Is the U.S. Mexican welfare?

News of demonstrations in Mexico and the protests over ICE raids in our own country has spread around the globe. To what end? It is beyond comprehension that Mexico thinks it has a leg to stand on when it condemns how the United States treats its citizens. We don’t exist to be plundered by people who can’t make it in their own country or prefer to commit crimes here. That seems to be the conviction among Mexican nationals and members of Congress duped into backing them.

Of course Mexico is unhappy that the U.S. is poised to do something serious about illegal immigrants. The U.S. is welfare for Mexican citizens who can’t make it back home. The good news is that we probably get the cream of the crop, those tenacious enough to make it in America. The bad news is what some of them do when they get here.

Add Mexico to the list of countries that needs to get their house in order. U.S. taxpayers have enough to spend on without funding a Mexican welfare state. We provide everything from free education to public services to illegal work. That’s wrong. Besides, we are already fighting about being a refugee sanctuary for those fleeing the Middle East. How many people do we have to support to appease liberal left lawmakers?

Trump was blasted for stating during his campaign that some Mexicans are rapists. Even when Homeland Security offers the numbers on who and what we are rounding up the protests over ICE raids continue.

Should we let sanctuary cities flourish and live with the consequences? Secretary Kelly visited San Diego earlier this month and offered his thoughts:

It’s inconceivable to me that people who are sworn to protect their communities would not want someone, anyone to remove criminals from their communities and send them somewhere else. I’m stunned when people say, well, we’re not going to cooperate with you even in the event of convicted criminals.4

It is disgraceful for agents to go into the private homes of individuals to cause fear on their families and community,” said Rep. Barragán. “Too many times I have heard from people that their kids are worried and cry at night. ICE should be held accountable for exactly who they are going after and why. I will continue to fight to keep families together.5

So now we have to justify to our own lawmakers why we enforce their laws? This is the sorry place illegal immigrants have brought us to. Illegals protest against America for what we are but love us for what we can do for them. Americans? We’re dumb enough to let them dictate their terms after they break into our country.