If there are any stories of people being refused rescue in Houston because of who or what they are, we haven’t heard them. White nationalism didn’t overwhelm the relief effort. Racism isn’t deciding who gets saved and who doesn’t. When a natural disaster like Harvey strikes the petty, mean-spirited congressional attacks on our country’s character are put in perspective. They are easy to ignore while we turn our attention to getting people back on their feet. The good in us comes out and despite what Congress seems to want us to think, there is plenty of good in most of the American people. 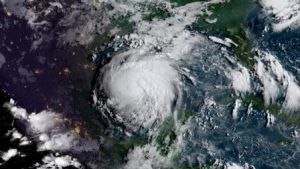 Disaster appropriations bill with no surprises?

On Sunday the House Committee on Appropriations announced Washington’s readiness to start throwing billions in relief funding at Texas and Louisiana. The bill is short. It gets funding started and that’s about all. There aren’t any surprises, unlike what we can expect from an upcoming debt ceiling scuffle that already threatens to draw Harvey into hollow congressional demands to finally address our debt and spending problems.

Fixing a catastrophic natural disaster should be a near-sacred obligation for our lawmakers, but when we hear swelling disaster relief numbers that top $100 billion there is plenty of room for troublemaking. We aren’t there yet, but will get there very quickly as spending rises to the forefront of the fall legislative agenda that may add Irma to our list of financial headaches.

Democrats warn of bipartisanship over debt and Harvey

Providing aid in the wake of Harvey and raising the debt ceiling are both important issues, and Democrats want to work to do both. Given the interplay between all the issues Congress must tackle in September, Democrats and Republicans must discuss all the issues together and come up with a bipartisan consensus.1

When we hear “bipartisan consensus” it’s never a good sign.

No natural disaster too great to stir up more anger

Criticizing Trump for pardoning Sheriff Joe Arpaio “with the eyes of the nation on Texas and Hurricane Harvey,”2 Congresswoman Norma Torres (D-CA) tossed a natural disaster into the overheated dialogue on immigration:

Now, as thousands face catastrophic conditions in Texas, we are hearing reports that the President may bring an end to the DACA program in the coming days.3

She is right, of course. All eyes are on Texas. The rest is political theater blown out of proportion, exaggerated, manipulated, and turned into propaganda for the benefit of lawmakers who spend a lot more time making Americans upset and angry than they do providing value.

We are too good for Congress, but it takes a natural disaster to prove it.

No white supremacy or racism in these floodwaters

In a climate where white supremacy and racism have dominated political headlines for weeks, Congress is ready to transition to the fallout from Trump’s deferred action announcement and another heated, last minute race to raise the debt ceiling ever higher.

Meanwhile, Americans are doing whatever they can to save lives and fix the damage caused by another catastrophic natural disaster. Disasters bring out the best in us. They are reminders that most Americans are fundamentally good people regardless of their political beliefs.

Is there any such good in Congress? Let’s ask that question again at the end of the fall session.

Is yesterday’s Trump debt limit deal with Democrats about tax reform, another pivotal administration goal that Republicans will likely fail on? That’s what Deputy Press Secretary Lindsay Walters suggested during yesterday’s Air Force One press conference. She put the issue front and center:

Director of Legislative Affairs March Short shed more light on what looked like a sell-out to the enemy:

I think it [three-month debt limit deal] puts pressure on all of us to get tax reform done before December. I think that we know that the economy has struggled for too long, and we need to get it turned around.5

We are eight months into the president’s first year and GOP lawmakers have not shown they are capable of anything with vision. Instead, they have left much of his agenda to collect dust while they fight with each other and opposition Democrats.

Was this about tax reform and did Trump just thumb his nose at a party that refuses to work with him except on its own fractured terms? We will have to wait on an answer for the first question. The answer to the second is obvious.

6:45 p.m. The Senate said yes today. No we’re waiting on the House to see if the 3-month, no spending cuts bill will go to the president’s desk. We’re also waiting on December 8, the date this bit of anti-conservative genius from Trump runs out and Republicans have to agree to a decision they have to live with.

The House and Senate put their heads together and passed over $15 billion in Harvey disaster relief on Friday along with the Trump-Pelosi-Schumer debt ceiling fix. Texan Ted Cruz focused on the positive:

We also saw Congress come together in a bipartisan way and pass a major relief package focused on delivering critical aid for Texans affected by Hurricane Harvey. I was pleased to work with my colleague Sen. John Cornyn in the Senate where we roughly doubled the relief coming to the state of Texas-increased it to about 15.5 billion dollars.6

He didn’t mention the debt ceiling, the president, Pelosi, or Schumer in his press release. Good for Cruz. A natural disaster should not be turned into a political opportunity.