It’s embarrassing to think about the shoddy roster of national leaders who will grace Cleveland and Philadelphia this summer. Some of them will eventually make their way to Washington as Cabinet members, advisors, and sycophants for a new administration. Some are already entrenched. One will become the president. In the process we may forget that something very important was taken away from us in 2016 that can never be regained: our respect.

Two national leaders: a loudmouth and a liar?

There is nothing special about 2016’s picks for our new leader except for the extraordinary amount of negative baggage each carries. The media has portrayed Donald Trump and Hillary Clinton as a loudmouthed bully and a liar.

One of them has enough political experience to shame us.

Bully or not, at least Trump tries to make it fun. Hillary Clinton comes off like a robot delivering the eulogy at America’s funeral as she helps put the final nail in the coffin of our respect for American leadership.

Are we incapable of coming up with a single person worthy of what we think a president should be? 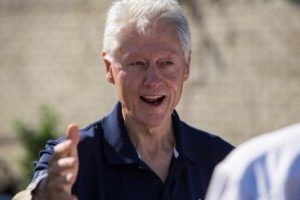 Do we have to respect our national leaders?

In Illinois we learned a long time ago never to respect our political leaders. There is little dignity and nothing to respect in someone who is sitting in prison.

Respect is window dressing. Sure, it would be refreshing to find a president we could look up to. That pipe dream is more the stuff of American legend than reality. Respect isn’t necessary. For all of his moral lapses even Tony Soprano was an effective leader. He was despicable. He got the job done. That’s all we need a president to do, isn’t it?

Whether from choice or lack of it Americans don’t seem to care about respect this year. Perhaps respect for our national leaders died with Reagan. Trump has eschewed dignity for publicity. It hasn’t hurt his poll numbers. It hurt him with cowards in his party who are fearful of how his words might reflect on them. It will not, of course, stop some of these Trump naysayers from speaking at the convention. The question is will they forgo their own self-respect, take back their words, and endorse the same man they said no to just a few months ago?

We will enjoy the same tawdry display in Philadelphia. Hillary’s background and honesty problems will be forgiven. Accolades will drop like balloons from the ceiling.

Clinton voters acknowledge that her integrity is an issue. They will vote for her anyway. Who needs respect when we can have the illusion of progressivism?

There is nothing in the oath of office that requires a president to command our respect. It does require that he or she “preserve, protect, and defend the Constitution.” Barack Obama put a stop to that when he ventured out to do his own lawmaking. He warned us that much of our system was broken. He complained that Congress wouldn’t follow his lead. That’s not how a leader acts. Leaders we respect don’t have to cheat. They don’t break the rules to get the job done.

It was devastating for the country to discover that a president can do whatever he wants and that only our highest court can stop him. Polls show that half of us don’t care. SCOTUS did and slapped Obama down for it, but Supreme Court justices don’t choose presidents. It only stops them when they run amok.

Now we have a veritable race war caused by the same man who has waved the flag of inequality for years. Had there been a little more respect for all the good things this country does perhaps the wounds our president worked so hard to reopen would have continued to heal. It is hard to imagine that trying to be part of a Civil Rights movement that ended half a century ago is worth stirring up the kind of violence we have seen at demonstrations across the nation.

Do our national leaders turn America into a lie?

Our national mythology goes back a long time. The Founding Fathers set the greatest nation on earth on the path to world supremacy. Washington refused to lie about chopping down a cherry tree. Our presidents are the greatest leaders on earth.

These are all myths. The truth is different. Sometimes it’s downright ugly.

Bill Clinton had his moral lapse. Like wife Hillary’s email scandal he disregarded the truth to cover it up. Enough Americans don’t seem to care any more than worried about reelecting Richard Nixon in 1972.

Should we accept that our next president may lie, cheat, steal, and have so little respect for the dignity of the office that American leadership will be mocked around the globe?

For now a loudmouth and a liar is as good as it gets.

Can we respect that?

Leave me a comment. Let me know what you think.