Home » American Ideals and Values » Money is Washington’s Only Value, So Stop Waving Our Flag

There has been more flag waving in the House of Representatives in the past two weeks than we’ve seen in the last two hundred years. Thanks for that goes to the impeachment-crazed hypocrites who are trying to convince the country of the necessity of their actions while they plan for a future that is very, very different from what America’s values represent.

The truth is that money is Washington’s only value. For all practical purposes that makes it America’s only value, too.

Democrats can stop waving our flag right now. It only makes them look more hypocritical than we already know they are. When they talk about our values they are not talking about us. They are talking about themselves.

Our values in danger from whom?

As usual, there are two sides to this. There is the Republican side and the angry side:

We have an obligation to resist this unconstitutional attack on our democratic values and hold Donald Trump accountable in the light of day.1

No, this was not about the Ukraine quid pro quo or even Russian election meddling. Reps. David Cicilline (D-RI), Hakeem Jeffries (D-NY), and Cheri Bustos (D-IL) made this threat less than one month after Donald Trump took office. The reason? He tried to make our ports of entry safer for Americans. 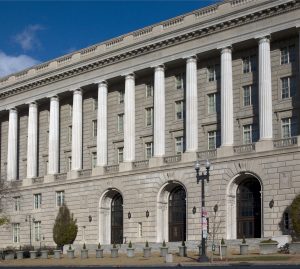 This Democratic Party trio was not the first to hijack our values for their own use. In an editorial released eight months before the 2016 election Congressman Brendan Boyle (D-PA) claimed that “Trump is a clear and present danger to American values.”2 and referred to his candidacy as “The Cancer Within.”3

Trump was and still is a threat to Democratic Party values, but whether these have anything to do with America’s values is very much in the eye of the politician. It’s not Trump who doesn’t regard the sovereignty of our borders as something worth defending.

Boyle signed on as a cosponsor of NY Rep. Ocasio-Cortez’s socialist Green New Deal. So did Cicilline, who backed his support with this statement:

I am proud to co-sponsor the Green New Deal and join with activists across our country to reduce greenhouse gas emissions, create millions of new jobs, and invest in rebuilding our crumbling infrastructure.4

Cicilline talked about a “10-year plan.”5 Stalin and Mao liked to break up the work into five-year pieces but either way, Green New Deal Democrats are following their lead to the same inevitable result.

At least Cicilline didn’t mention values in his Green Deal press release. Others did that for him:

On February 17, 2019, Congresswoman Deb Haaland (NM-01) will participate in a Green New Deal Town Hall hosted by 350 New Mexico. The Green New Deal is bold set of values that looks to put people to work rebuilding the country’s infrastructure in a way that forges an equitable path to a renewable energy economy.6

At least there is a shard of honesty in Haaland’s announcement. Instead of trying to claim that the Green New Deal somehow reflects American values, she just swapped them for the socialist values in Ocasio-Cortez’s bill. At a time of record low unemployment Democrats still believe the government should be America’s employer.

That puts us on the path to the truth. Money, not values is what this bill and most everything else Democrats are pushing is all about. They are so immersed in their own rhetorical nonsense that they no longer see the difference.

That’s not good for the country because some Americans believe what they hear from Washington.

If Trump doesn’t speak to our values, who does?

Senator Robert Menendez claims that “Trump Doesn’t Speak For Most Americans on Values.”7 This doesn’t help to explain why his party is so worried about losing the next election that it’s offering every form of monetary incentive imaginable to voters.

If you are a Democrat the trick is to convince people that America’s values and your values are one and the same thing. Some people fall for it. Those who need money are especially vulnerable, a point not lost on climate bill auteur Ocasio-Cortez:

The negative impacts of climate change are most acutely felt by those already experiencing poverty and those already subject to systemic racial and social injustice. Amid the climate emergency before us, we have an exceptional opportunity to ensure that Americans left behind by inequality and economic uncertainty are given a seat at the table.8

Voting on it doesn’t make it so, but this is a new reason to spread more money around. We can assume this is a top down scenario, since Washington Democrats love to spend what they value most even when it doesn’t belong to them.

During last Wednesday’s Democratic Party debate wannabe presidential candidates Cory Booker and Amy Klobuchar and for-real candidate Elizabeth Warren mentioned our values. The first thing you see on most campaign websites, including Warren and Booker’s, are dollar signs. That’s not unusual for candidates of either party, but let’s be clear about what’s at stake here.

We already know too well where Warren is coming from. Her platform is pretty simple and straightforward: use health care to reorganize the economy.

That’s going to be easier to pull off than Ocasio-Cortez’s absurdist plan for economic reorganization, but that still doesn’t mean Warren’s ideas have anything to do with America’s values despite what she said as far back as 2013 during an address to the AFL-CIO:

On almost every issue of economic concern, our values are America’s values, and our agenda is America’s agenda.10

That’s a pretty steep claim considering that union membership is dwindling, but it highlights a very important point: America’s values are what Washington’s power elite want them to be despite the Founder’s insistence on a government by the people.

When Obamacare passed Nancy Pelosi assured the nation that it was:

a bill that reflects our best values and addresses our greatest challenges.11

The bill addressed our greatest challenges by making some of them worse, like the price of health care. If that kind of spending reflects our best values then Warren’s plan to spend over $50 trillion should be the biggest boost the nation has ever seen right up until it ruins us and we long for the good old days of Obamacare.

More proof money is what we value

Tax revenue is tax revenue regardless of where it comes from. Even drug dealers are expected to pay taxes on their profits.

Illegal immigrants also pay. Politicians on the left value their presence and are willing to make an ethical tradeoff for the tax dollars.

Across the country, individuals eligible for protection under the American Dream and Promise Act and their families contribute $75.4 Billion in spending power and $27.1 billion in taxes each year.12

That reflects the general opinion in Washington that our values are represented by what we can spend. Washington lifer Steny Hoyer (D-MD) was clear about this when he opposed George W. Bush’s proposed budget back in 2005:

I believe that the budget is an illustration of where we are willing to invest the funds collected by our citizens to enhance the programs and services provided to our people. And, it is a reflection of the interests and values of our country.13

15 years later and still in Congress, Hoyer beat the same drum about Trump’s budget because it:

The logical conclusion to draw is that Republicans don’t represent America’s values:

We have seen this tired playbook before: first, bankrupt the nation with tax cuts for the wealthy and corporations; then, propose a budget that makes working families foot the bill, with devastating cuts to Medicare, Medicaid, and other critical investments,” said [North Carolina Democratic] Congressman Price. “Far from making America great again, this budget betrays American values and mortgages our future.15

Price is on the House Budget Committee. Unlike Hoyer he co-sponsored the Green New Deal and the Medicare for All Act of 2019. Democrats have a problem with these bills. Only a select group of Americans are expected to foot the massive tabs which limits the revenue we can collect. On the other side of the equation those who will ostensibly benefit most aren’t even expected to work for their federal handouts. Why? Work violates America’s values, or at least that’s what Rep. Rosa DeLauro (D-CT) would have us believe:

I fear that President Trump’s actions today will do just that. Our social safety net programs are a reflection of our nation’s values, and we cannot allow them to be unraveled. President Trump must immediately end his cruel assault on our nation’s most vulnerable citizens.16

We got the same response when the administration tried to enforce a public charge rule to restrict the use of federal benefits by immigrants:

No one should be punished for using a public service. This rule goes against our values as a nation and we must oppose the rule,” said Congressman García.17

What the rule goes against is growing the welfare rolls as quickly as possible to justify the tax increases Garcia’s party will inflict as soon as it has the power to do so. Just because Rep. Garcia represents a destitute city doesn’t mean we should turn the country into the same thing.

There are certainly values at play here, but they aren’t America’s. They are about restricting the right of one set of citizens to enjoy the fruits of their labor by turning them into enemies of our values. Democrats can wave the flag of freedom, democracy, and even the Founding Fathers until their arms wear out. It won’t erase the fact that all that matters is money.

To wrap this discussion up who better to turn to than the ironic but predictable Democratic front runner, aging white guy Joe Biden. “Joe’s vision”18 maintains that “America is an idea” and that we’re fighting for its soul. At the top of the page is a banner with lots of $ signs and contribution buttons.*

If you want to know what Democrats see when they think about America’s values, this is the only place you need to look.

2. “The Cancer Within: Trump is a Clear and Present Danger to American Values.” Brendan Boyle. March 4, 2016. https://boyle.house.gov/media-center/editorials/cancer-within-trump-clear-and-present-danger-american-values, retrieved November 20, 2019.
3. Ibid.

*I decided not to link to the page because the Biden campaign’s linking T&C are rather onerous. You can use the text link in my last footnote to see for yourself. Ironically, the suggested contributions appear in red. Why not blue?