Home » Elections » Liars, Bullies, and Racists: 2015 Was a Shameful Year

What a shameful place to find ourselves in at the end of 2015. If all I knew about America was what I heard from our presidential candidates, I would wonder why anyone would live in a country that lacks the tiniest shred of decency. Are we nothing but a pathetic conglomeration of liars, bullies, and racists?

Our wannabe future leaders should be honored. They have been offered a voice and a place in the spotlight. I don’t think a stronger character statement can be made than the decision to use that voice to defile America.

Instead of toasting the beginning of a New Year and listening to our leaders present and future celebrating the accomplishments of 2015 and all the good things they are about to bring us, we should be demanding that they hang their heads over twelve shameful months of politicking. No public figure has the right to falsely stain the people of this country. 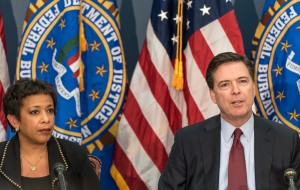 Comey and Lynch on San Bernardino Attack Department of Justice

We can only hope that Ted Cruz’s daughters were too busy wondering what their father was bringing home for Christmas to wonder why a national newspaper would feature a cartoon portraying them as animals. In time, perhaps they will understand that their dad is involved in an ugly, disreputable profession where the media, the internet, and bullying one’s colleagues brings irresistible opportunities to degrade our nation and people.

Why did Hillary Clinton’s camp opt to paint all Americans and Republicans in particular in a bad light by joining the media in reporting an anecdotal tale of racism against Muslims in Austin, Texas?1 Does Clinton’s charge reported on The Hill that Trump’s candidacy is being used by terrorists add anything of value to the national dialogue?2

Why would Bernie Sanders accuse America of institutional racism and creating an “international embarrassment?”3

Why does Donald Trump’s bullying, take no prisoners strategy work?

The answer to all four questions is the same: because politics has sunk so far into the mire that bombast, mudslinging, and abuse have to go far over the line to even be noticed.

At least Trump managed to prominently display a Merry Christmas message on his campaign website.4 That’s more than we got from Sanders or Clinton, perhaps out of fear of jeopardizing their chances of winning the Muslim vote by elevating the image of a religion that spent 2015 showing the world how capable its followers are of killing.

Acts of hate are better than acts of kindness

Racism, violence, and hate infested 2015’s political dialogue, much of it created out of minor events manipulated for media hysteria and political gain. An incident in Chicago that is still the object of protests against the city’s business sector and charges of racism joined the national movement to reign in the police while we heard precious little about how to fix the violence that is endemic in some of our black communities.

Were we not about to enter an election year, Americans might have been spared some of the hyperbole that skewed the national debate on terror after San Bernardino away from Islam and towards gun control, a critical component of the Democratic Party’s plans for 2016.

Speaking of the families of those shot in San Bernardino, Barack Obama offered a reminder:

they’re also representative of the strength and the unity and the love that exists in this community and in this country.5

Despite challenging Donald Trump as 2015’s most divisive figure, the president also reminded us to stick together:

one of the most important things we can do is to stay true to who we are as Americans. Terrorists like ISIL are trying to divide us along lines of religion and background. That’s how they stoke fear.6

How did he unite his country? When terrorists murdered people on our soil he dismissed Islam’s role and blamed our gun laws:

It’s another tragic reminder that here in America it’s way too easy for dangerous people to get their hands on a gun.7

While the Benghazi attack and an email scandal repeatedly question the veracity of Hillary Clinton, Bernie Sanders is occupying himself by blaming America for not endorsing his socialist ideals* and the Democratic Party’s chief mouthpiece is sitting in the White House with one year to go and too many goals slipping away. Instead of wasting our time with hucksters who only want to be president, what did the man who won the ultimate prize have to say about 2015?

Our commander-in-chief’s year-end list of accomplishments8 is a product of his fantasies. He took credit for global leadership, the Iran nuke deal, combating terrorism, an enormous bipartisan budget, and one more claim that we know is absolutely false: that the American people had something to do with all of these things. If you want to join in Obama’s credit-taking, feel free. I’ll join those who don’t believe liars and bullies have the right to turn us into a nation of racist xenophobes too naïve to know when we are being had.

*January 19, 2016: America may be taking a beating from Sanders’ rhetoric, but it hasn’t hurt him one bit. He showed the kind of earnestness in Sunday’s debate that we will never see from Hillary Clinton. If only he were a Republican …