Home » Elections » Lead the World? U.S. is a Bad Example to Follow.

I was meeting with a business associate from Germany and couldn’t resist asking what people on the other side of the pond think about the ugliness building up to our next presidential election. The U.S. has always prided itself on being destined to lead the world, but our increasingly destructive politics sets a bad example.

Who will follow a superpower that doesn’t even believe in itself? 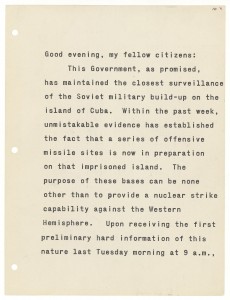 How to lead the world
Courtesy National Archives

The answer to my question was what I expected. Our friends across the Atlantic are nervous. I doubt things are much different on the Pacific side.

We are pretty jittery here at home, too.

Will voters decide on a socialist? Will we choose a former Secretary of State Republicans will waste years trying to impeach? Or will we swing to the right and pick a loudmouth who might throw the delicate international balance into turmoil?

There is even the chance that the democratic system we expect everyone else to adopt will be ignored and party honchos will decide the outcome of our conservative nominating convention. What a wonderful irony to lay at the feet of the world: our party that most prides itself on upholding what the U.S. is meant to be has threatened to throw our political process away if the popular choice doesn’t align with the views of GOP bigwigs.

The remaining contenders for a job that includes leading the world to further our interests are proving that they value their own ambitions over setting an example other nations will respect. The U.S. doesn’t live in isolation. Everyone knows what everyone else is doing. We are delivering the message that the U.S. is not even up to the task of leading itself.

Words and actions matter. They matter at home. They also matter overseas.

Can we expect the world to take us seriously when our future leaders and even their own parties portray our best and brightest as thugs, liars, and unqualified incompetents?

Best we have to lead the world are not leaders

You can’t lead the world and not be a leader. There is too much competition. No matter how we feel about Putin, about China’s government, about the heads of the EU, or even nuclear nut job Kim Jong-un, the heads of other nations can’t be ignored or disregarded. This isn’t the 1940s.

There is more than one superpower.

This is not the time to show internal weakness.

So what did we do?

We have so shamed ourselves over this election that the rest of the world would be within its rights to build a fence around America to protect itself from us. Let’s be honest. If the United States has a cream of the crop in politics, we aren’t seeing it.

There is nothing united about the message we are sending to the world. The bad example we chose instead is that the key to success is backstabbing, divisiveness, and winning at any cost. Despite ample help from the Republican Party, even Hillary Clinton and Bernie Sanders no longer look like paragons of campaign civility now that the question of who is least qualified to lead has been raised.

What does a leader do to lead the world? Not this.

This isn’t about Obama’s failure to lead the world. It has nothing to do with waxing nostalgic about our vanished heyday. This is about putting politicians on the world stage who embody the definition of ugly American: loud, boorish, demanding, even ignorant of the realities they are going to have to deal with if they win the presidency.

That’s what a leader does.

The person who follows Obama needs to be able to have that power of persuasion. He or she needs the strength of character that John Kennedy summoned when he told Russia to get their missiles out of Cuba. By the time we finish sending the message to the world that Republicans hate each other, everyone despises Trump, our top Democrats may not be qualified to lead, and at least one of them should be in handcuffs, how can the winner of this race have any expectation of legitimacy as a leader here or anywhere else?

The U.S. isn’t the only place where politics is an activity best suited for the gutter. We are, however, a nation that the world has traditionally looked up to.

By the time 2016 is over, the world will be looking down.