Too often something you want takes a big piece out of you when you get it, like a cute stray dog that sinks its teeth into your hand the moment you offer it a snack. Trump’s plans to repeal the “no stumping from the pulpit” Johnson Amendment runs a big risk of doing exactly that.

Johnson Amendment repeal: did Trump think this one through?

The Johnson Amendment repeal is another careful what you wish for hazard. It’s hardly news that religious conservatives and evangelicals in particular have a big voice in the Republican Party. While they may want their churches to have a say for or against political candidates, they should take a good, hard look at where our population and its religious preferences are going. 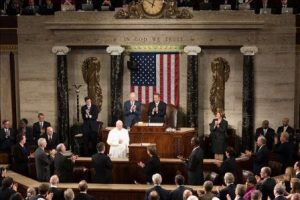 Immigration, refugee risks worth it?

Immigration is a critical issue for the Catholic Church. 83% of Mexican citizens identify as Roman Catholic. 5 percent as evangelicals.1 Democrats know it and they also know that Hispanics make up a large and growing number of American Catholics, 27% of whom were not born in the U.S. according to Pew Research.2

Barack Obama’s White House was well aware where the church stood on immigration:

Their [religious leaders] efforts remind us that the immigration system is designed to do more than strengthen our economy and national security: it also serves to protect those who aspire to live, work and thrive in this great nation.

Catholics leaders and organizations are among those playing a leading role in making this case.3

Don’t think for a moment that Democrats forgot.

The opportunity presented by Pope Francis’ visit to Washington in September 2015 was not lost on Democrats like extremist liberal Congresswoman Jan Schakowsky:

The Pope has also focused on the need for wealthy nations to open their doors to immigrants seeking a better life. As he prompted us, “Our world is facing a refugee crisis of a magnitude not seen since the Second World War.4

Yes, refugees come into play here. So do a whole host of issues important to immigrants, minorities, activists, and pressure groups who are likely to vote for Democrats.

The Pope remarked during his visit:

Mr. President, together with their fellow citizens, American Catholics are committed to building a society which is truly tolerant and inclusive, to safeguarding the rights of individuals and communities, and to rejecting every form of unjust discrimination.5

If we dump the Johnson Amendment, do evangelical Republicans have the strength of numbers to compete?

We are better off with the Johnson Amendment

We’re kidding ourselves if we believe churches don’t already have enormous political influence. Conservative Christians have guided the Republican agenda for years. The Catholic Church has endorsed liberal policies on issues like illegal immigration even when it means backing those who break the law, as it did during the Elvira Arellano sanctuary circus in Chicago.

Allowing churches to back political candidates is a dangerous step for conservative America. Demographics and the growing number of immigrants, refugees, and others who at this moment are demonstrating because they believe they are being denied their rights should give President Trump pause to reconsider. Midterms are around the corner. Repealing the Johnson Amendment sets us up to wallow in campaign rhetoric on a level we have never seen before as spiritual values mix with political campaigns.

Besides, religion is about morality and ethics, not partisan politics. What could possibly be more anti-religious, amoral, and unethical than a U.S. political campaign?