Treason is serious business. It’s so serious the government can kill you for it. Just dropping the word like Democrats are doing now shows how far witch hunters are willing to wallow. Remember to thank them for showing the world that when it comes to foreign affairs the U.S. is innocent, naïve, and stupid.

How did a superpower get to this sorry place? Ask our last president.

Democrats aren’t willing to call the newest trumped-up pseudo-shocker about the president’s son “treason.” That would take courage. Instead, they got their message out by talking around what they don’t want to come out and say with phrases like “disgraceful behavior bordering on treason”1 and “potentially treasonous.”2

There is no need to be coy. We know what you mean and what you want. 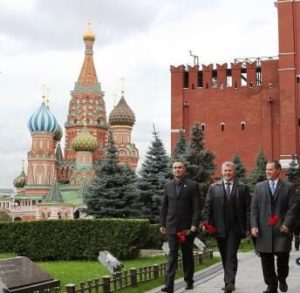 Innocent and naïve in a dangerous world

The setup for the Russia scandal is classic Obama: a shocked U.S. is helpless when faced by global treachery. He drew another of his lines in the sand by making a show of punishing Russia days before he left office:

These actions are not the sum total of our response to Russia’s aggressive activities. We will continue to take a variety of actions at a time and place of our choosing, some of which will not be publicized.3

The Syria crisis earned the same “time and place of our choosing” threat.4 So did Iran and its ballistic missile program.5 In Syria we were embarrassed by Putin. Iran got the deal it wanted. Both made us look innocent, naïve, stupid, and unable to deal with the big, bad world.

You know the rest of the story. Obama warned of “data theft and disclosure activities”6 before the election but it didn’t matter until things went bad. Now we’ll never hear the end of it. That’s what his innocent, open-eyed, progressive worldview bought the country.

Not so innocent, after all

Recent events reflect badly on Americans who aren’t innocent, naïve, or stupid but look hypocritical. Our feigned shock that a foreign power cares enough about who we put in office to do something about it contradicts our proud history of treachery, nation-building, and dirty politics. A little tampering is something we should take in stride and maybe even admire if it’s done well.

Don’t be naïve: globalization is bad for politics

Don’t expect to hear a lot of global Kumbaya from the Trump administration. That was Obama territory. He saw our global role with the optimism one expects from a community organizer:

if you had to choose a moment in history to be born, and you didn’t know ahead of time who you were going to be, you’d choose now. Because the world has never been less violent, healthier, better educated, more tolerant, with more opportunity for more people, and more connected than it is today.7

Except that we aren’t united. Many people worldwide define themselves by desecrating life. They could care less about tolerance and human dignity. That’s the difference between talking politics and facing reality. Our leaders can’t be innocent, naïve, or stupid. The stakes are too high. In Obama’s tolerant, connected world the unwary are eaten alive.

The world is a very nasty place. You have to expect that if you get involved in global politics, global politics will get involved with you. Now we have a Soviet Cold War Renaissance thanks to our last president’s inability to navigate the intricacies of global treachery.

Can’t we all be friends?

Democrats would probably prefer to forget what Obama said about Russia after the Boston Marathon bombing:

And this I think is an example of the kind of constructive, cooperative relationship that moves us out of a Cold War mindset into the realm where, by working together, we not only increase security and prosperity for the Russian and American people, but also help lead the world to a better place.8

What do people in a relationship do? They interfere in each other’s lives. Get used to it.

6. “Statement by the President on Actions in Response to Russian Malicious Cyber Activity and Harassment.” The White House. President Barack Obama. December 29, 2016.