Home » Illinois » Greatest Accomplishment for Illinois Was This?

At the end of another abysmal 12 months Illinois can finally declare without a doubt what its greatest accomplishment was in 2015: talk. Lots and lots of talk.

This time there was a Republican at the helm.

Bruce Rauner has been sitting in the governor’s seat for a year. Before predecessor Pat Quinn left office, he made a final State of the State address that boasted progress that was illusory at best and at worst destructively expensive, or at least would have been if his plans had gone anywhere. Democrats have a knack for making fantasy sound like reality. When you are broke, it’s easy to come up with expensive, unaffordable reforms because talk is so cheap. 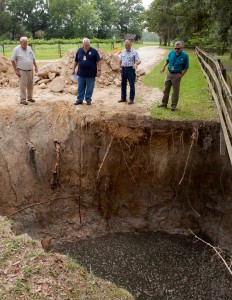 How deep can Illinois sink in 2016?
FEMA/David Fine

Fortunately for politicians, you can always blame someone else for obstructionism when nothing happens. Every Illinois official capable of staying in office knows this. They have to. Blameful talk is all that’s left. There is very little money to spread around, no budget to do it with, and a big sinkhole of debt many are determined to make even larger.

After one year with a Republican in the governor’s mansion

Governor Rauner spent 2015 proving his head is screwed on straighter than Quinn’s, likely owing to his non-career politician, non-liberal take on how to run a state. He talked about reining in unions and tried to stop fair share payments. He talked about pensions, but even the too-modest reforms the legislature managed to pass were blocked by the courts.

Rauner also wanted to chop the budget down to size, one of the reasons there is still no budget. Instead of a budget we got talk, thanks to a ruinously entrenched state Democratic Party that made sure nothing happened over the past 12 months because the only fix the party can envision for anything, including a debt crisis, involves spending money.

Greatest accomplishment? There is none, but we do have this …

When the clock struck midnight last night, Illinois closed out another year spent going nowhere. Looking back, our greatest accomplishment for 2015 was Democrats, Republicans, and Governor Rauner working together to talk about not passing a budget. Pensions still loom over taxpayers waiting for the next tax increase hammer to fall, especially for those unlucky enough to be living in Chicago. The public school system still needs money, lots of money that doesn’t include what taxpayers have to hand to retired teachers and administrators both statewide and within the Chicago school system, a bone of contention between Rahm Emanuel and Springfield.*

To be fair, failing to agree on how to spend taxpayers’ money was not the only thing that happened in Illinois last year. There was a smattering of other noteworthy negatives, including:

1. We kept the debt solidly in place, proving again that there is one thing Illinoisans can depend on their state to do.

3. Our largest city stayed in the headlines thanks to murders, shootings, and charges of racism and police violence. How bad is the situation in Chicago? Two days before the New Year the mayor came back from Cuba to announce that passing out more Tasers to police officers was a positive. When we have the first death from a police Taser, he will probably rethink that strategy.

5. Chicago stuck to Rahm Emanuel’s boast of an illegal immigrant-friendly, sanctuary city with plans to invite even more illegals.

6. More public officials turned out to be corrupt, including the head of the Chicago Public Schools, Barbara Byrd-Bennett. The CPS chief at least had the decency to throw in the towel and plead guilty.

7. Illinois couldn’t figure out how to pay lottery winners despite continuing the Illinois Lottery’s ongoing get rich quick marketing campaign. This was another embarrassment that made national news, though it wasn’t all that different from forcing residents to hand over tax dollars in exchange for more debt. The problem was finally fixed at year’s end, so I suppose we could call this another accomplishment. It certainly sounds better than the truth.

There are many Illinois politicians who would tell you that there is more to brag about, but let’s face it. It’s all talk. Despite all the money we pay public officials to run this state, both while they are working and after they retire, Illinois is facing a New Year little different from the last. Perhaps if we legalized corruption and let our public decision makers enrich themselves to the extremes of avarice they would expend a little extra effort and drag us out of their deepening sink hole. They might even do the jobs we pay for.

*Update January 20, 2016: The friction grew today with the official announcement from downstate that Republicans would like to remove CPS from Emanuel’s auspices and let the state manage his school system. Tough talk from Rauner shows he’s ready to play hardball. The governor’s timing was opportune, to say the least. Chicago’s beleaguered mayor is as vulnerable as he’s ever been.