Home » Immigration » Common Sense and Decency? Who is Being Naïve?

If all Americans were blessed with a dose of common sense we wouldn’t do a lot of the things we like to do. We wouldn’t eat fast food, drink too much, smoke cigarettes, speed in our cars, visit shady websites, or enjoy any of the other habits we know we shouldn’t indulge. We wouldn’t vote idiots devoid of common sense and simple decency into office, either, but we keep doing it election after election. When our choices decide that citizens of other countries matter as much or more than Americans, what does that say about our political sensibilities? 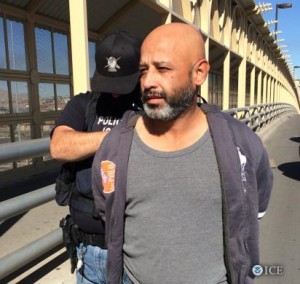 This is common sense
Courtesy of ICE

This is what common sense means in government

It is surprising how many congressional bills have the “common sense” stamp of approval. We have common sense bills for nutrition disclosure, endangered species protection, housing investment, economic recovery, compensation, and of course immigration. That last one? It has always been about common sense. It still is.

The foolishness over lifting immigration laws is damaging and tenacious, an all-out effort to continue fighting a pointless battle billed as common sense reform. Level-headed Americans should be gagging on the indecency of what Obama and company are still trying to do, but many of us are eagerly buying their simple, sensible amnesty solution. If we weren’t, there would be no support for the politicians doing the selling.

Another legal decision last week affirmed the wrongness of the president’s attempt at executive action. The thumbs down from the U.S. Fifth Circuit Court of Appeals led Representative Luis Gutierrez to describe his unique take on what justice means:

The foot dragging of the lower courts to try and run out the clock has delayed justice, but the law and common sense are so clearly on the President’s side that it is only a matter of time before these deferred action programs are fully implemented.1

Rest assured that if the court had upheld the president’s overreach we would have heard cheers for justice finally being served all across liberal America. Instead, justice refused to open the door to Obama’s newest round of immigration orders and isn’t giving out any signals that it agrees with this kind of common sense. Will it matter to those who believe the law supports political indecency because they know it can always be hidden under the cloak of sensibility? Not likely. They know that’s how common sense works for government. It reassures the people. It makes foolhardiness tolerable and even forgivable. If common sense isn’t good enough, the decency label can be applied to make stupidity palatable.

What common sense and decency mean to Obama

Speaking before a DNC Women’s Leadership Forum, the president suggested that politics isn’t about the common sense and decency of the people.2 He lamented that:

We’ve got a system that too often rewards division and polarization and short-term thinking — and it rewards people for saying the most outrageous things, even though everybody knows they’re not true, but we think of it as entertainment somehow.3

Our political system also wants to reward people who don’t deserve anything, an equally outrageous and indecent gambit that’s what we should expect whenever we hear that common sense requires us to do something. The simplified, dumbed-down version of the truth is for the politically naïve and while there is nothing in politics or government that should cause us to anticipate common sense or decency, we keep hearing appeals for exactly that and they are not all coming from Democrats.

Even Republican Rand Paul invoked “common sense and decency”4 over immigration, forgetting that in politics these two maxims are diametrically opposed. Common sense dictates that we don’t reward people who invade another country just because they think the grass is greener across the border. Decency demands that we don’t rub the American peoples’ faces in their government’s mistakes.

If you watched Tuesday night’s GOP debate you saw the common sense appeal in action when Jeb Bush and John Kasich talked about why Donald Trump’s deportation plan won’t work. We heard about children and families and values, things common sense tells us everyone should endorse. We didn’t hear how common sense and decency dictate that Americans should always come first, not just because of our ability to pay but because we should have a say in who and what we support.

Tyranny over immigration reform is common sense, for some

Over two centuries ago Thomas Paine’s views on common sense included opposing the kind of political tyranny behind today’s push for amnesty. He probably never considered a political system so indecent that tyranny was promoted as common sense, something close to Harry Reid’s defense of the executive orders that were behind the liberal furor last week:

The executive actions were neither a complete nor a permanent solution to the problems plaguing the immigration system, but they were a common-sense step in the face of inaction. 5

The magic number we keep hearing is 400,000, the ceiling on how many illegals Homeland Security can deport with the resources at hand. Lucky for illegals, taxpayers have the money to help support services for those the government has allowed to stay. Meanwhile, the Obama administration just announced in-state college tuition for veterans,6 a benefit many illegals already enjoy. Most of us would have little problem funding that, just like we don’t have a problem paying for VA health care the government seems reticent to provide. We know that giving things away is just common sense.

What do you think?