Students planning walkouts, visits to state legislators, a talk with the president, and other strategies to finally get our gun laws to wise up and keep kids safe are about to learn a harsh lesson. Government doesn’t jump because we want something. It jumps when the people who run it want something. Federal and state legislatures have been fighting over gun control for a long time. That’s how educating kids created a market for bulletproof backpacks and why “safe students” doesn’t mean what it’s supposed to mean.

Second Amendment Caucus Chair Thomas Massie (R-KY) found five Republicans to go along with H.R.34, the 2017-2018 version of the Safe Students Act. Previously backed by Ron Paul in 20071 and resurrected from the GOP trick bag just before Trump took office, this proposal is a very different take on safety for school kids.

The legislation is another effort to repeal gun-free school zones. Why?

Massie used the same language when he proposed the repeal of safe zones in 2015.3

Legality became an issue when the Supreme Court ruled the 1990 Gun-Free School Zones Act unconstitutional.4 Despite problems with the law the real argument isn’t the Constitution. We’ve heard the real issue many times before in many different guises: people are safer with more guns around.

That’s going to be a tough one for students to swallow and especially those in Florida who are about to get a lesson in what happens when well-intentioned idealism goes to war with politics. It will also be tough for teachers who are hearing suggestions that they should carry firearms.

Music teachers with Glocks will be a hard sell for mainstream America even in our tragically gun-loving times. If we’re going to put guns in schools let’s start with an armed guard at a secure main entrance with a metal detector. The problem is that this won’t do much to help rationalize the proliferation of guns. That’s what the legislative battles are really about. 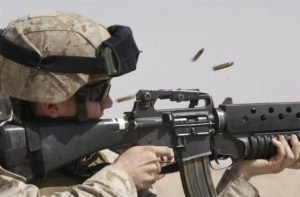 This is how guns keep us safe
DoD photo by Petty Officer 2nd Class Brandon A. Teeples, U.S. Navy (Released)

After the tragedy at Stoneman Douglas, Congressman Gus Bilirakis (R-FL) wants us to “work together to create meaningful change.”5 To do that he takes a stance on mass shootings that skirts the issue of guns:

Despite the attempts by some to sensationalize this tragic issue, we can all agree it highlights the fact that we have a broken mental health system. It is often too difficult to get seriously ill people access to the care they need, despite multiple warning signs, until its [sic] too late. That has to change. This cannot be a partisan issue. Mental illness affects people of both political parties, both genders, all races, all income brackets, and all ages.5

Words like “broken” and “partisan” signal a problem that won’t be solved anytime soon. Should we cut to the chase and lock up everyone with a history of aggression and mental illness, or face facts and do something about access to school buildings? If we have to lock down schools like prisons, then at least we’ll have safe students. When was the last time you heard about a mass shooting in a jail?

Bulletproof backpacks are a symbol of government’s problem

America loves guns almost as much as lawmakers relish gridlock over issues they can resurrect whenever political need or national tragedy knock. The real tragedy here is that students seeking safety in institutions controlled by government are going to find out just how little federal and state legislatures are willing to bend when they don’t want to or worse, how they give the appearance of action by doing nothing. Perhaps it’s best they learn early that looking to government for solutions to polarizing issues is a fool’s errand. That’s why the bulletproof backpack market is picking up. When that trend plays out we can look to the private sector for better ways to keep our children safe while they learn.

Universal home schooling on computers, anyone? Then all we’ll have to worry about is Internet child predators.

No, government won’t protect you

The president offered these remarks to children in the wake of the shootings:

I want you to know that you are never alone and you never will be. You have people who care about you, who love you, and who will do anything at all to protect you.7

Yes, people will protect kids. Every time there is a mass shooting we hear tales of heroism.

Government? Not so much. Just wait and see how this develops as the weeks pass and other news takes the place of what happened at a school in Parkland.

February 23, 2018: Democrats also on the hook for school shootings

Just because conservative proposals to address school shootings fall short of what many consider common sense doesn’t mean Democrats have any better ideas. To the contrary, they used the latest school shooting as an opportunity to score points while funerals were planned in Florida.

In a letter dated February 16, 2018 17 House Democrats called the shootings a “preventable tragedy.”8 They remarked that:

Sadly, since the mass shooting at Sandy Hook Elementary School five years ago, more than 430 people have been shot in over 230 school shootings.9

The 17 lawmakers claimed that they “stand ready to lead and do our job”10 by holding congressional hearings on school shootings. Even in the heady days of their majority under Barack Obama when it seemed the party could force any bill it wanted, Democrats did nothing to stop the school violence cited in their letter while they used every shooting to demand overreaching gun laws.

On the day of the tragedy Nancy Pelosi also suggested that shootings are preventable:

Congress has a moral responsibility to take common sense action to prevent the daily tragedy of gun violence in communities across America. Enough is enough.11

To label what happened in Parkland “preventable” only causes more pain to the survivors, the victims, and their families. Like Republicans ignoring health care when they had their chance, Democrats had other things to worry about instead of addressing gun violence. They worked with Barack Obama to make sure illegals were taken care of and forced the Affordable Care Act, Dodd-Frank, and other rabidly partisan pieces of legislation.

How do you address unthinkable tragedy? You don’t politicize it to score points while the funerals are still going on or rub families’ faces in their pain by calling it preventable. You say a few simple, respectful words like what we heard from Congressman Ted Yoho (R-FL) and then you shut your mouth. There is time to go to the mat later.

As The Hill reported on Monday, the Florida Senate made a gesture in the newly-revived debate over clamping down on assault weapons and weaponizing school employees. Most gun control activists would regard the legislation as tepid, as best. That gives us a pretty good clue as to where new gun bills are headed in Washington.

This is not a dialogue that will convince Republicans to throw their ideas into the ring. As other concerns including Trump’s tariff plans take center stage expect this issue to die away until the next tragedy stirs the legislative pot again.