Home » Immigration » Boycott Immigrants Who Provide No Value to Our Economy

I go to work every day. My job is important to me. Could my company get along without me? Of course. Anyone can be replaced, but it would never occur to me to boycott my employer because of my political convictions. Boycotting your job to prove your worth is a good sign that you don’t value what you do and aren’t offering much to the economy. 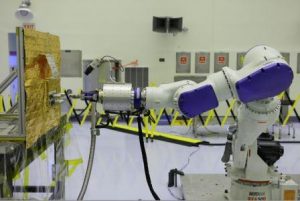 No boycott from this worker
Courtesy NASA/KSC

Don’t confuse value with working hard. Anyone can work hard if they want to. Not everyone can provide value by offering abilities and insight others don’t have. Working hard without skills only makes you dispensable, not valuable. Did anyone mention this to the slackers celebrating A Day Without Immigrants before they walked off the job?

A Day Without Immigrants will soon be permanent

Boycotts are a last resort for the powerless. Businesses will eventually boycott immigrants who provide little value. We won’t need them anymore. The economy will march on and workers with no skills will be on the street.

Chores like wiping down tables, running machines, packing boxes, making beds, and cooking fast food don’t require schooling. You don’t even need to know English. That didn’t stop the myth of indispensable labor behind A Day Without Immigrants. The name is a misnomer, of course. Most of us welcome immigrants, but the labor this boycott was about shouldn’t be working at all. Taking the “illegal” out of “immigrant” won’t change that.

I doubt that a lot of immigrant neurosurgeons, trial lawyers, and rocket scientists stayed home Thursday. Like the Fight for $15 this is a gesture of hopelessness. It’s also a boycott by the stupid, because many low wage jobs are on track to be replaced by automation. Why should businesses pay for unskilled labor when a robot can work 24-7 and won’t walk off the job because it wasn’t born here?

Boycott immigrants: we don’t need your job or your politics

It’s a good bet that the immigrants hoping to make their point with a work boycott don’t read the Labor Department’s Monthly Labor Review so they missed the article about automation. If you are a worker without education or valuable skills to offer the economy the word “marginalized” should scare you:

The disquieting news is that tomorrow’s workers will have to be perpetual students to keep up, while lesser skilled workers will find themselves increasingly marginalized and sometimes, ultimately, replaced by technology in some form or fashion.1

Unskilled manufacturing and fast food jobs are among those on the hook. We will need fewer and fewer people to do these things. If low skilled workers aren’t replaced by technology they can also be replaced by overseas workers. That’s an ironic take on immigrant labor. If immigrants in the U.S. don’t value their jobs we can give the work to immigrants who haven’t arrived yet. We might even be able to toss a few bones to citizens and legal residents who need work. As competition for low wage employment becomes fierce they should be the ones who come first.

Some jobs will always require a pair of hands. The fact that the only value those hands provide is a simple manual task doesn’t give workers a lot of bargaining power. For every immigrant who walks away to please activists there will be plenty more to step in. Some will even have genuine identity documents.

Is showing up for work a value proposition?

“Do what we want or else” is activist politics as usual, whether the threat is over votes or a nationwide immigrant boycott. If I had an employee who didn’t show up out of sympathy for illegal immigrants I would think about firing that person not because of what they support, but because they believe they need to hurt my business to show they are valuable to my bottom line.

There are exceptions. Some restaurants, including some notables in Chicago,2 stood with their employees and shut down for the day. That was their decision, but I question any movement so cynical that it advocates boycotting work as a way of proving worth. After coming to America for a better life by breaking the law, why would you protest your job when you get here?