We recently treated the world to the embarrassment of some wildly successful black people complaining about diversity in the industry that made them rich. If nothing else, this proves the race card’s ability to reinvent itself. It’s still viable if played correctly and no longer respects the boundaries between wealth and poverty that used to define discrimination.

Life brings opportunity good and bad. Most of us have learned to accept that, but there are times when the equal opportunity our country stands behind is violated. Too often we just sit back and let it happen. Democratic Party members are doing this right now with their plans for immigration.

Let’s assume that if you are making millions and are passed over for an Academy Award nomination it doesn’t necessarily prove that America has failed you because of your color. Sometimes life just isn’t fair and not getting what you want is how things work out.

Life is more cut and dried at the other end of the income spectrum. Still, for the less than rich and famous another month of less than 5% unemployment raises the question of who is to blame when opportunity is elusive. You might need to take a hard look at yourself, or if you have no skills, face lots of competition for low-paying jobs, and support Democrats you might want to look at who you vote for. 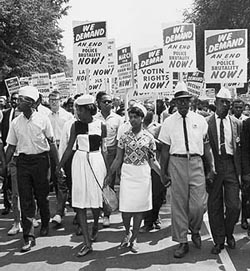 Should we hand these gains to illegals?

Democrats are treating black people like fools. Americans of every color need to call them on it.

Anyone who tells you how necessary illegal labor is to the economy is lying. Illegal workers don’t bring economic opportunity with them. They steal it from others.

Tucked into the president’s appeal for his 2017 budget are more plans for immigration. In addition to adding younger non-Americans to the labor force, a key administration immigration goal is to make sure that America:

… provides a pathway to earned citizenship for hardworking men and women who pass background checks, pay a penalty and taxes, and learn English.1

We’ve heard that line more than once. “Hardworking” is the important word. Congress may not have acted to make life better for those who claim discrimination based on the “I-word,” but that hasn’t stopped us from protecting their right to work and entitlement to our guaranteed minimum wage.

It’s no secret that many of the hardworking illegals Democrats dream about getting their hands on aren’t making a lot of money. That’s a problem for black people. House Democrats pushing a mandatory federal raise argued:

The Raise the Wage Act would give nearly 35 percent of African American workers a raise.2

Remember that 35% when you hear Hillary Clinton talk about raising the minimum income and a pathway to citizenship in the same rabble rousing speech. Anyone who believes the two are compatible is no friend to Americans at the bottom of the income scale.

Not everyone sees a conflict here. House and Congressional Black Caucus member Yvette Clarke backed New York’s decision to shield illegals from deportation by not cooperating with federal authorities:

Individuals who are an integral part of our society were effectively deprived of a right basic to full membership in that society – the right to interact with their government without fear of reprisal. That terrible policy has now been changed. New York City has demonstrated the best of its character as a community in which people from around the world are welcomed to pursue their aspirations,” said Congresswoman Clarke.3

Members of the CBC are members of Congress, which explains why their immigration plans don’t take any chances with a potential base of support that doesn’t have a lot to do with the black people they represent:

The Immigration Reform taskforce will be focused on creating a pathway to citizenship, eliminating the existing immigration backlogs, enhancing the policies that allow for the reunification of families and crafting more humane detention policies.4

For Democrats that pathway to citizenship has become the only acceptable solution to ending job thievery and other forms of illegal economic competition, from Obamacare fraud to tax and benefits fraud. That doesn’t make it a good idea for black people competing to get ahead.

Tricked again! Where did all the money go?

One of the wins listed in the CBC’s legislative accomplishments for 2015 was the extension of the Earned Income and Child Tax Credits.5 Perhaps the CBC forgot that this is a benefit famously abused by illegal immigrants at great cost to taxpayers and the detriment of the people the caucus claims to represent.

The Treasury Department revealed that $4.2 billion was paid out to Additional Child Tax Credit beneficiaries who should not have been working here.6

In December 2015 Texas Republican Sam Johnson gave us this bad news about the Earned Income Credit:

In fact, the IRS Commissioner grudgingly confirmed that, as a result of the President’s executive amnesty, illegals could actually get as much as $24,000 from the IRS by retroactively claiming the Earned Income Tax Credit (EITC), a refundable tax credit.7

Despite federal funds diverted away from vulnerable Americans to the undocumented, it’s not all about the money. There are other kinds of opportunity we should be protecting. One of these is the right to participate in our political process.

Equal opportunity to vote: not always a good thing

Economic opportunity isn’t the only thing illegals can steal.

When the Supreme Court struck down Section 5 of the 1965 Voting Rights Act the uproar was directed at how this would affect the civil rights of those who lawfully own the right to vote. Low income minorities were high on the list of Americans we were cautioned could be disenfranchised. Few who warned about the consequences of the decision considered that states seeking to protect the ballot box with voter identification laws were protecting this right for all Americans.

Another Supreme Court case is due this summer, one that will rule on the legality of Obama’s executive immigration orders. Deferred action’s amnesty has long raised questions about the potential for vote fraud because it allows illegals to obtain Social Security numbers and driver’s licenses. Ohio Senator Rob Portman noted in a letter to the president:

The left claimed the threat of illegals voting was a lie, but this year the Election Assistance Commission granted permission to Arizona, Kansas, and Georgia to verify citizenship as part of the voter registration process.9

Recalling the gains black people made with the Voting Rights Act, the White House called the right to vote:

… one of the most fundamental rights of any democracy.10

Today, we don’t just do ourselves — and this country — a disservice when we choose not to exercise that fundamental right. We dishonor those who fought so hard to give us that right in the first place.11

That kind of lofty speech raises the question of why public officials dishonor something as fundamentally American as the right to vote by using citizens as the reason not to protect it with something as simple as asking for ID. Non-Americans have already created competition among politicians who pass out the benefits of our society and economy. Who do Democrats think are competing with the 35% of African American workers they say would benefit from a minimum wage increase?

When equality conflicts with opportunity, liberals sell out

Equal opportunity is a great thing. We were brought up believing equality is what America stands for. We all want to have a chance at the American Dream. Levelling out that bumpy playing field doesn’t mean what it used to, though.

Why do liberal politicians who claim to represent the interests of black people endorse policies that directly compete with African American citizens and legal residents? If you want to worry about racism and opportunity, think about how black people in America have been shunted aside by a party talking out of both sides of its mouth.

We are so focused on making things equal and giving everyone their fair share that we forget that not everyone deserves an equal chance. African Americans, Native Americans, Whites, Latinos, Asians, and everyone else who lives and works in this country deserve equality as long as they belong here. If they don’t, they deserve nothing.