Your government wants to do more than run your life. It wants you to have faith that it will do it better than you can. That means there is no reason to thank God for the things we need. All we have to do is pray to the government, which will give us what it thinks we should have whether we want it or not.

Don’t thank God for these things

There is a reason Bernie Sanders was such a big hit earlier this year. He offered everything his supporters needed and asked for little or nothing in return.

Don’t thank God for what government does for us. God didn’t commute 1,023 prison sentences,1 many for the kinds of drug crimes that fund inner city violence. Obama did that. He also gave us health care we can afford, or at least that’s what he promised.

You don’t need to pray to God that you will be able to retire free from want. Instead, just pray to the government that the Social Security Trust doesn’t drown and that Medicare won’t collapse under the weight of its promises.

If you are an illegal immigrant, don’t thank God for letting you hide out here. Thank Homeland Security. If you are a parent, don’t thank God that your kids aren’t fat and diabetic. Michelle Obama gets the nod for that. Need to duck those student loan or mortgage payments because you didn’t read the fine print? God won’t help you. Washington might.

There is only one small hitch. When government gives these things, they bite back. Washington is anything but selfless. 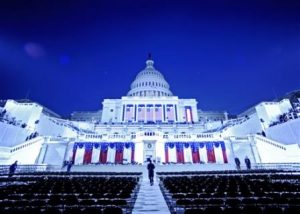 Do we pray to this?
Courtesy Defense.gov

Pray to the government to take religion’s place

I’m conservative but admit to not being religious. That makes it easier for me to be shocked and astounded by the demands of both the religious right and the godless left.

Both sides expect government to moderate our morals, which means pushing their own perspectives on the people. The message is the same: God’s territory is now the government’s.

If you find that thought offensive, consider abortion and gay marriage. Religious conservatives want the government to say no to these things. The left wants the government to not only say yes, but to pass laws so the country doesn’t have a choice but to join in. That’s what the judicial branch did with Roe v. Wade over 40 years ago. It’s still an issue each and every election. If that decision is overturned, Democrats will be just as morally offended as conservatives are now.

Which side is right? Neither. The argument has been framed so only government, not God, can give the answer.

What does that mean? God takes second place. We use the government to resolve moral quandaries that have nothing to do with running the country because government, not God scores big political points. Trump has already sent out hints that he will help address Christian conservatives’ sore spots. Democrats will have no part of it.

God is too wise to get involved in this sort of partisan scuffling. The only option we are left with is to pray to the government to do the right thing.

How often does that happen?

Thank God when he helps out

A Texas congressman drew God into a remark on collective bargaining:

I thank God for what unions have done to replace valleys of despair with mountains of hope.2

My guess is that God would be offended to be drawn into the union argument. The people should have better vehicles than big labor to address their despair but if God turns away, we always have the Democratic Party.

Americans used to have faith in themselves when their lives fell apart. Failing that, there was religion. Times have changed. From the first time our children stare down a school lunch selected by federal dietary gurus to the last few years of our lives, government claims to have our backs. Nothing shores up that promise like Social Security, a program members of Congress promise can provide a good life in perpetuity:

We need to make sure that Social Security continues to be available for not only today’s seniors but for future generations of middle class families who need a secure retirement.3

Failing that, even our investments are on Washington’s safeguard list.

Watchdogs like the GAO tell us retirees are not secure:

We are cautioned that relying on Social Security means we will eventually lose out:

Both Social Security programs are on a fiscally unsustainable path.5

Is faith that government will make good against all odds the answer?

And so I would just close by saying we need to continue to pray. That God will give us the wisdom and the strength we will need to restore this nation and to save the American Dream.6

We get a different perspective from House Democrats:

“Democrats are committed to building a Stronger America together by securing our nation, securing our future, and securing our democracy,” said Whip Hoyer. “By doing so, we can ensure that all of our people can Make It In America and renew faith that Congress is on their side.”7

That all but defines the gap between left and right. Does strength come from politics or from religion? It depends on who has the most to gain from taking the place of God.