Home » Economy » Working Class Must Fail So the Left Can Prosper

How does it feel to live your life as the punchline of a bad joke? Working class Americans can answer that. They listen to the same joke and the same promises every four years even though everyone knows the truth: the working class must fail so others can prosper. Success is not part of the future because the failure of lower income workers keeps the left in business.

Who benefits from working class failure?

The left thrives on a dependent working class. What would the Democratic Party do if everyone suddenly started making $75,000 per year? They would have to tax it away to create a new lower class or do what they are doing now: import people from other countries to be our new working poor.

It is very important that the working class never succeeds beyond putting food on the table and paying taxes. Nowhere is this more apparent than in a city like Chicago. Democrats have run the city into the ground and passed every type of fee, fine, tax, and levy you can imagine. Everyone pays, even those working class unfortunates who were part of the reason for all the spending. When Illinois ran out of money and couldn’t pass a new budget, who were the left’s poster children when social services were cut? Members of the working class just barely getting by.

Whether the issue is tax breaks, child care, free college, free health care, minimum wage laws, or forgiveness for violating the law, when a politician talks about doing something for the working class it isn’t to help lower income workers succeed. It’s to keep them where they are. The easiest way to do that is to force dependence on Democrats for the necessities of life, like Hillary Clinton’s bill of fare for everything from tax reform to workers’ rights to debt-free college to job skills.1 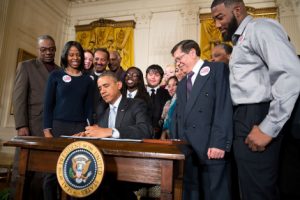 She made a promise:

Let me say this: You have me and Barack working on your behalf for the rest of our lives. So no need to worry. (Applause.) We’re going to be here.3

There is no need to worry unless you depend on the government for survival. Mrs. Obama is a smart woman. She knows that there will be opportunities galore after her husband leaves office. Speaking engagements, honorary degrees, and all manner of public appearances mean big bucks, something America’s working class doesn’t have a lot of experience with.

That must be what “working on your behalf” means, because lower class workers didn’t make big gains on her husband’s watch.

The First Lady also spoke of the $2,800 rise in “typical household income”4 reported by the Census Bureau. $2,800 must be a laughable sum to people who will earn immense fees for mouthing the same nonsense about economic mobility that we’ve been listening to for the past eight years.

It must also be laughable to working class Americans whose incomes fall far below the salaries in the mid-$50,000s5 that Mrs. Obama was referring to.*

Income inequality has stayed the same. The change in families living in poverty was only 1.2%.6

The good news for working class Americans is that the biggest joke of all is being played on citizens from other countries. Promises of a better life in this land of opportunity are a big, fat lie if you don’t have an education and don’t speak the language.

What happened to succeeding by the bootstraps? There is no political gain to be had when people take their destinies into their own hands and there are few as vulnerable or dependent as illegal immigrants. Even if their efforts to keep working class citizens in their place fail, leftist politicians have a future if they can keep illegals on American payrolls.

Why the working class needs another Democrat

The working class doesn’t have a voice. It has politicians, unions, activists, and social service agencies that talk about need and rake in the dollars.

One day before Mrs. Obama made her remarks the president spoke at the Annual Congressional Hispanic Caucus Institute Gala. He concluded his remarks about DACA, DREAMers, and coming to America to succeed by saying:

Americans with money to spend will keep picking up Barack Obama just like we’ve been picking up Bill Clinton and every other politician making money on the speaking circuit trumping liberal successes while the working class fails. After all, if the working class finally makes it who will pay to hear politicians from the left tell us how much more money we need to spend so workers can finally make it?