Home » Government Ethics » What You Believe Is Not Your Opinion, So Whose Is It?

Who decides what you believe about politics and current events? Is your opinion yours, or someone else’s creation? More often than not, the controversies we obsess over aren’t nearly as big as they sound. They seem important, but they don’t affect a lot of people. That’s because our opinions on popular hot buttons are not ours. Someone paid for us to have them. 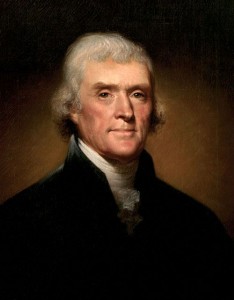 Jefferson worried. He was right.

Where does what you believe about political issues come from?

Despite the trumped-up threats to our democracy issued from Democrats after Citizens United, lobbyists and pressure groups represent big money from the right and the left. They decide what senators, representatives, and other officials need to convince us to believe. Media outlets work for both sides, too. Rest assured that filming screaming protesters, replaying violent police videos, and interviewing striking teachers doesn’t mean that what we are seeing and hearing has any significance for the country.

Social media savants have a role in deciding what we believe, too. They get the word out with clever infographics bearing inflammatory statements that are often misattributed, inaccurate, and misleading, just like hoax emails that masquerade as urgent information.

These are just a few of the places that our beliefs and opinions come from. They are bought, sold, shaped, and disseminated with just enough stealth to make us think that our opinions are our own.

What you believe is contentious and trivial

Does it surprise you to discover that some of the most contentious issues don’t affect very many people, or that they are falsely blown out of proportion? If you are still waiting for jackbooted ATF agents to kick your door down and seize your hunting rifles, you’ve got a long wait. It’s not going to happen, no matter how many times you see a smirking Hillary Clinton or Barack Obama on Facebook or Twitter threatening to take your guns away.

How important are the political issues that stir us up? We are threatened with figures on gun ownership, but the number of gun-toting Americans is not what we should worry about. The concern is what happens when owning a gun goes bad. The number of crimes committed with firearms is a lot less than the uproar over gun control would lead you to believe. The most recent National Institute of Justice figures show that murders committed with firearms dropped 39% from 1993 to 2011. Criminal incidents committed with guns that didn’t result in death dropped 69% for the same period.1

Need more proof that what you believe is a wizened political calculation? The popular estimate for illegals residing in the U.S. is 11 million. That means they make up 3.44% of America’s population. Does that make them worth the time we spend fighting over immigration? Public school teachers, all the rage with the Obama administration, unions, and purveyors of red T-shirts for strikes make up only 1.13%2 of Americans.

Are LGBTs worthy of all the attention directed at them from patronizing politicians? Whether you are gay or can’t figure out where you fit on the sexuality spectrum, you make up a middling 3.4% of Americans,3 ironically no more significant than our illegal population. That didn’t stop the White House from dashing out a fact sheet applauding the president for “Making the Advancement of LGBT Rights a Foreign Policy Priority.4 We can only hope he’ll have more luck with gay foreign policy than Middle East policy.

The point is that we don’t focus on realities. We focus on principles, values, and most important, whatever angers us the most. Anger attracts attention and brings in cash. When the public’s emotions are being manipulated, you know the pressure group-lobbyist-politician-media dynamic is in full swing.

The ethics of deciding what you believe

The House Ethics Manual is 456 pages long. Quoting Henry Clay’s March 1829 speech at Ashland, Kentucky, the book that governs how our representatives should conduct themselves observes:

Government is a trust, and the officers of the government are trustees; and both the trust and the trustees are created for the benefit of the people.5

That’s a lot of trust in one sentence. Our representatives, senators, and other officials may be trustees, but how many are capable of stating with a straight face that what they say about the issues they support is trustworthy?

Today, lobbying is an accepted part of the legislative process. Members of Congress often view lobbyists as useful sources of information and political support. They see the pressure groups that lobbyists represent as a valuable tool for citizens to present their views before members of Congress.6

While this may be true, the big question is how many citizens are represented by pressure groups, how accurately is the urgency of their views presented, and for what gain? What seems fair, unfair, and downright unethical and forms your opinions depends on the information you are fed.

The White House warned of “The 10 Most Wanted Lobbyist Loopholes,”7 assuring us that:

My Administration is committed to reducing the undue influence of special interests that for too long has shaped the national agenda and drowned out the voices of ordinary Americans.8

When President Obama warns of undue influence, he probably doesn’t include his administration’s propaganda about health care, Jonathan Gruber’s observations, union interference, and all the special interest voices that helped mold his greatest accomplishment, the Affordable Care Act. He likely doesn’t consider empowering groups behind the Hispanic lobby, union lobby, LGBT lobby, Black Lives Matter, or any of the others deemed worthy of center stage, either. That’s because undue influence is only a bad thing when it benefits someone else.

When your opinion is for someone else’s profit

There are many ways to influence people. Thomas Jefferson worried about those working for government using their influence for electioneering:

In response to Jefferson’s concern, the heads of the executive departments issued an order which stated that while it is “the right of any officer (federal employee) to give his vote at elections as a qualified citizen…it is expected that he will not attempt to influence the votes of others nor take part in the business of electioneering, that being deemed inconsistent with the spirit of the Constitution…”9

For all of his insight, Jefferson could not have foreseen how far the influence over our beliefs extends, from government blog posts issued by employees and special interest consultants to the words of our elected officials fashioned by lobbyists hidden in the shadows.

How much of politics is not electioneering? Everyone working for government is our employee, but the words and deeds of our representatives in Congress and the White House are most concerning when they devote their energies to refashioning our beliefs and opinions instead of attending to the business of running the country.

2016 is just around the corner. A lot is at stake. When you think about what you are told to believe, how much of it has a big impact in the real world outside of Washington politics?