When our government does something wrong we like to know about it, if only because it affirms what we already suspect. Government has a name for admitting mistakes. It’s called “transparency,” a word that makes you think something is going to get fixed when it isn’t.

Reform is not what transparency is about. Too often transparency is used to tell us that something is going to happen that we don’t approve of. Either the government can’t do anything about it or is going to proceed whether we like it or not. This makes the myth of an open, transparent Washington a laughable slap in the face to taxpayers.

Just last week we were handed an especially infuriating example of how transparency works and just how worthless it can be.

How transparency can turn into an exercise in bureaucratic prestidigitation was obvious in Thursday’s admission from ICE that 19,723 criminal immigrants were released1 last year. This should not have been news, though right leaning media outlets still expressed their shock over Homeland Security practices we have heard about before. Instead, our anger should be directed at passing this off as justifiable business as usual.

ICE Director Sarah Saldana noted during testimony that two-thirds of the releases were “legally required”2 and that:

Over a year ago, on November 20, 2014, Secretary Johnson issued several memoranda, including Policies for the Apprehension, Detention and Removal of Undocumented Immigrants and Secure Communities, outlining the Department’s civil immigration enforcement priorities and strategies for the removal of criminal aliens.3

Putting these people back on the streets pales in comparison to the millions we let live here thanks to ad hoc regulations that declare illegals off limits because of financial and resource constraints. That’s how transparency works. Government does things we don’t like and then tells us all about them.

Would it make any difference if we didn’t know at all?

How transparency works in press releases

Partisan immigration policies are just a tiny example of how the government does bad things and then tells on itself. Overspending, budget tricks, hidden provisions in legislation, and waste, fraud, and abuse of taxpayer money are all part of a very big picture that transparency attempts to smooth over. That’s why transparency without accountability is such an insult. Without reform it is worthless.

The Obama administration promised to usher in a new era with the Government Accountability and Transparency Board to Cut Waste and Boost Accountability:4

Cutting Waste, fraud and abuse has been something Washington has talked about for decades, but now more than ever, what the American people need is action,” said Vice President Biden.5

Yes, the people need action but we have heard enough of these kinds of announcements about making government more responsive, transparent, accountable, and all around better to know what to expect:

How transparency and accountability work in practice 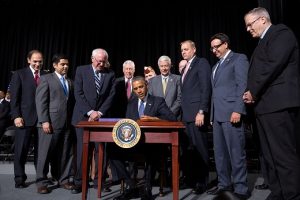 How did all that high level transparency work out? Hiding behind Homeland Security’s release of immigrant criminals we still have the usual piles of wasted money. The Earned Income Credit tax giveaway, another problem made worse by the government’s reluctance to enforce immigration law, has a bad payment rate of 23.8% and a goal of 23-28% errors for 2016.6 This is after the Obama administration’s vows to get on top of the improper payment problem with bills like the Improper Payments Elimination and Recovery Act,7 signed as part of the president’s quest to make government more transparent.

Government transparency is a pretty simple thing. It’s about letting everyone know what you have done. There is an implied duty to fix problems, but implied is often as good as it gets.

Is a more transparent VA a better VA?

Consider the problems with the Veterans Administration, an agency that has been around since 1930. When the president signed the “Veterans’ Access to Care through Choice, Accountability, and Transparency Act of 2014” he promised:

We’re moving ahead with urgent reforms, including stronger management and leadership and oversight. And we’re instituting a critical culture of accountability — rebuilding our leadership team, starting at the top with Secretary McDonald.8

For the 60 newly enrolled veterans in our review who requested care but had not been seen by primary care providers, we found that 29 did not receive appointments due to the following problems in the appointment scheduling process:9

What did this bit of transparency accomplish? The VA vowed “that by December 31, 2016, it plans to begin monitoring the full amount of time newly enrolled veterans wait to be seen by primary care providers.”10

When the next report comes out detailing the problems that never went away, transparency dictates that we will tell taxpayers about the failures and set another goal for improvement.

Our government is too big to fix all the problems we hear about. Big government’s flaws are a more forgivable offense than the other use for transparency, rubbing our collective nose in a partisan bureaucracy that does whatever it wants. That kind of transparency works like this:

Government tells us it plans to do something we won’t like.

Government does that thing.

Government admits it did that thing.

Then it does it again.

And there is absolutely nothing we can do about it.

Federal immigration and Labor Department policies define this sort of abuse that can’t be stopped no matter how much criticism descends from watchdog agencies, inspector generals, and congressional oversight panels. The only thing that fixes it is a fundamental shift of partisanship to another majority, which switches the abuse of federal policy to the other foot.

It is hard to imagine that there are scores of Americans who think that it’s a good idea to release criminal illegals instead of tossing them out of the country posthaste, or for the IRS to use its taxing authority to go after political ideologies unpopular with Washington bigwigs. Homeland Security’s ongoing excuses for its actions define the uselessness of transparency for anything other than government trampling the will of the people and letting us know about it.

Do you prefer transparency or are we better off now knowing? The result will be the same, but without it we might sleep better at night.