Using kids to get your way is one of the lowest ploys a politician can resort to, but that doesn’t mean that doing something under the guise of saving children to tug at our heartstrings is off the table. Time and again many of us fall for the same old propaganda tricks even if the argument makes no sense. In this case, stopping an epidemic of gun violence that exists largely as an agenda item for Obama’s legacy will likely be taken entirely out of our hands whether or not we believe what we hear. Our president is going to put one more brick in place before he hangs up the presidency and whether Congress agrees is immaterial.

During a New Year’s Day address that sounded like a postmortem on his presidency,1 Barack Obama gave himself credit for a few accomplishments and then talked about one piece of unfinished business: stopping an epidemic that Congress has not agreed to do anything about.

When our representatives don’t step up and do Obama’s bidding we lose our voice, or at least those people do who don’t agree with the president’s agenda and methods for achieving it. That voice will be denied again as we kick off 2016. 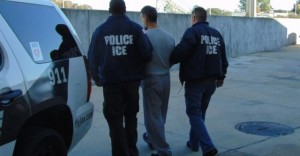 Hijacker sent back to Lebanon
Photo courtesy of ICE

“Epidemic of gun violence” is a propaganda phrase that confuses the impact of horrific acts with how often they really happen. Nevertheless, this phrase is spilling from liberal mouths and won’t go away until Democrats can say they did something to regulate firearms, even if they have to rely on their lame duck leader to do it on his own.

Fortunately, White House complicity is not something they need to worry about.

Americans are being urged to stand together to stop Obama’s epidemic while we ignore other risks that are too politically dangerous to address because they are fundamentally at odds with current liberal thinking. It is easier, safer, and more politically advantageous to regulate Americans because of gun violence while liberal sacred cows like illegal immigrants and refugees are protected for 2016 election battles. One of those sacred cows, an illegal immigrant from Lebanon who was kicked out just before Christmas, was guilty of hijacking an airliner in 1996.2

A nod to Newtown

He didn’t say anything about the attack in San Bernardino.

How offended should we be at being hit over the head with Sandy Hook, a heart-rending mass shooting ostensibly caused by lax gun laws, while Muslim terror attacks in San Bernardino and Garland are not even mentioned? Perhaps Obama also understands the difficulty in keeping guns away from terrorists.

The White House is trying to gain support by fear mongering over an epidemic created by politics. Talk about a “dangerous few” causing “harm on a massive scale”4 sounds scary. It means nothing in light of the administration’s refusal to take necessary steps beyond politically motivated firearm regulations that won’t keep guns away from those who could just as easily resort to other means, like the Boston Marathon pressure cooker bomb or the pipe bombs found in San Bernardino.

Regulating guns is not the only thing that children are good for. With Homeland Security already carrying out its plans to do the right thing and step up deportations this year, we heard from House members about “A Wish for the Holidays”5 to halt the removals:

It’s shameful that children will be spending the holidays in detention centers across the United States. I urge us all to remember the harrowing journey many took to come here seeking safety and pray that we stop tearing families apart,” said Congresswoman DelBene.6

One of the things that might keep America safer is knowing who should be living here and who should not. Democrats don’t like that idea and will break ranks with a leader who is less and less valuable as his administration draws to a close. While Obama’s background checks and other intrusions for gun buyers will win partisan applause, any suggestion that states try to confirm the backgrounds, identities, or immigration status of their illegal residents will be rejected out of hand and met with Justice Department lawsuits like we saw in Alabama and Arizona.

There is an epidemic we need to stop that puts all Americans in danger, an epidemic of stupidity. This epidemic will cause us to profile Americans citizens and look into their backgrounds while we give an unlimited pass to illegal residents without identities or backgrounds and open our door to foreign intruders. The real issue isn’t what marginal reforms Obama can take within the narrow range of his executive powers, whether granted by the Constitution or claimed by privilege. It is what he hasn’t done because it conflicts with other priorities, including those Jeh Johnson referred to today as being:

consistent with American values, and basic principles of decency, fairness, and humanity.7

Twisting these principles led to the influx over the border, allows sanctuary cities to thrive, and refuses to allow us to acknowledge the role of Islam in violent attacks, but no matter. Barack Obama is fixated on gun control and won’t rest until he gets something, anything on the books, even if it is an executive order that does nothing but create more work. Once that task is done, he can say he did what he said he would do.

How do we stop the next San Bernardino? That’s not an issue we are likely to see taken up by this administration. We have too many Americans to regulate first.