Halloween is over. This year that’s a good thing. As Townhall observes, even the quintessential kids’ candy fest was trampled by politically sensitive people too afraid of offense to risk being offended for one day.

Are we going to be allowed to eat our Thanksgiving dinners in peace or are we too hung up on our history with Native Americans to understand that the past is over and things are different now? An observant Canada Free Press article suggests the alt left is not going to let history go unnoticed. 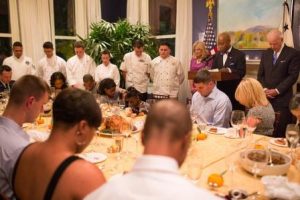 Costumes, confederate flags, sports team names, social media postings, and even the avalanche of sexual harassment allegations too ancient to file charges over all have one thing in common. They encourage people to pursue ideological attacks for their own sake, an Obama holdover that is flourishing in the age of Trump.

Lee is dead, buried, and very much alive

Press Secretary Sarah Sanders hit the nail on the head after the left’s sensitivities were irritated by Chief of Staff John Kelly’s remarks about Robert E. Lee:

And General Kelly was simply making the point that just because history isn’t perfect, it doesn’t mean that it’s not our history.1

Applying politicized 21st century values to our history works when you have an axe to grind. Otherwise it only makes us slaves to the past.

So what happens if we wipe everything that might offend sensitive Americans from our culture?

When anything that can be construed as offensive is abolished, when our speech is controlled and every act scrutinized for correctness, we will be something the left despises: white. We will be colorless, bland malcontents so eager to root out insensitivity, callousness, bigotry, and hate that we will all see, hear, talk, and look the same. It’s not a huge leap of logic to see where it starts: politics that scrutinizes a child’s Halloween costume for political correctness and turns Thanksgiving into something we should be ashamed of.

When the politically sensitive get too wrapped up in witch hunting they don’t see facts and we live in the past. Refusing to see what fits with polite politics turns us into hypocrites.

1. Political correctness demands we protect illegal immigration because we came from immigrants. It also insists that we spend billions on a heroin crisis.

Where does much of our heroin and illegal immigrant problem come from? Mexico, championed by the left for criticizing our president.

2. The left wants protection from violence with gun control. At the same time prominent Democrats blast the president for trying to control who comes to our country despite the risk of terror attacks like the newest tragedy in New York.

3. We use African Americans as America’s historic symbol of need and abuse to rake in votes. This keeps disadvantaged black communities squarely under the thumb of the Democratic Party and whatever it thinks African Americans need to move forward. You can call this liberal politics. You can also call it ideological slavery.

Rooting around in our past to place blame in the present is easy and it works. It’s also easy to politicize a topic like sexual harassment and draw conclusions that have already been made and serve a purpose that politically sensitive people are too afraid to challenge.

If you want America to be a nation of racist, white supremacist sexual predators you can find evidence to support your belief. Does that make you right?