Making America great doesn’t mean what it used to. These three words remember a time and place that vanished years ago, one that no longer has a lot of relevance to Republican voters the party is trying to win over with pleas to traditional values. The problem is that Republicans don’t understand traditional values in the way they like to think of them any more than they can fathom how Barack Obama so effortlessly changed America’s political landscape.

Of course, the truth about Obama that’s so hard to face is that he didn’t change America or its values. America changed. Obama went along for the ride and was smart enough to use it to his advantage.

The other truth, a far uglier one for conservatives to contemplate, is that the party’s traditional values don’t matter anymore. The people have moved on. The party didn’t move with them.

As the campaign season started up last year prominent Republicans focused on “…the values that we all hold dear.”1 At the time those values meant going after Planned Parenthood to “get answers for the American people.”2

Perhaps the party never considered how many Americans and women in particular wanted its answers. The disconnect between modern values and traditional conservative values is one of the biggest reasons Republicans can’t relate to more voters in a politically meaningful way.

Conservative politicians still recite nods to tradition and the party line. Alabama Representative Gary Palmer, a 2015 newcomer, responded with this when asked about the meaning of “Republican:”

It means standing up unapologetically for core principles of limited government, for traditional values, and for faith and family. It also means promoting the ideas and values that will get our nation back on the right track.3

Our country has been blessed with greatness because it was founded upon sound principles by people of strong moral character. If we as a nation are to continue to progress, we cannot allow our fundamental values to erode.4

There is truth and fiction behind these words. They accurately portray the Republican Party’s obsession with defending traditional values at the expense of embracing the present. There are not many Democrats who would agree that their party’s modern, progressive values fail to represent an even stronger moral character than the tenets held by conservatives. Eight years of Obama prove that many Americans agree.

Congressman Lamborn is correct, though, about eroding fundamental values.

Republicans have had a lot to do with undermining those values. Now, scrambling to find a way to counter Donald Trump, they are willing to throw them in the trash. 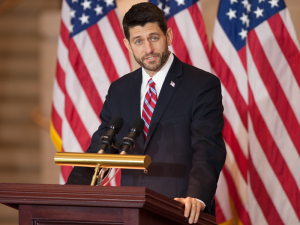 Republicans don’t believe that the people are always right

Do party leaders come before the people?

The will of the people is about as traditional as conservative values get, but with Cruz and Kasich out of the presidential race prominent Republicans are still refusing to set aside their anti-American, people’s choice be damned attitude about Donald Trump.

This is a lethal contradiction the GOP can’t survive. Trump is the party’s presumptive nominee because the people chose him. That’s all that matters. Just as the party expects conservatives to kowtow to whatever policies it dreams up that purport to carry out the will of the people, those who put Trump in the lead have every right to condemn Republicans attempting to yank the rug out from under his candidacy.

He may not be the right choice, but at this point Trump is the choice.

Other flaws are glaringly obvious in two election year truisms:

America has not gone downhill. America has changed. Obama spurred that change. That doesn’t make him evil. It makes him willing to embrace values the Republican Party steadfastly refuses to accommodate.

It also means that traditional values have to change with the times and become modern values.

Obama did what many Americans wanted him to do or he wouldn’t have been elected to a second term and his approval rating wouldn’t stand in such stark contrast to the GOP’s belief that the country is appalled by his actions. Many don’t believe he has done enough. Consider the groundswell of support for Bernie Sanders, who makes Obama and Hillary Clinton look like moderates.

Appealing to a vanishing core of conservatives who would be happier living in the 1950s is not a recipe for making America great. If we want to guarantee America’s failure the best way to do it is to hand this election to the Democratic Party not because what its adherents believe is fundamentally wrong, but because our conservative party is unwilling to adapt to beliefs held by many Americans, including the belief that Trump should be the Republican nominee.

Modern values can still be conservative

Paul Ryan talks of a “confident America” and a “generational defining moment.”5 We have just had an eight-year defining moment that would probably last at least four more years if Obama could pass an order allowing himself another run for the presidency. Ryan’s fractured party is providing conservatives with their own special defining moment, an embarrassment the speaker’s public exchanges with Trump will only make worse.

Ryan’s party seems fundamentally incapable of understanding what has happened to America, preferring to fall back on tried and true nods to old-fashioned values that are vanishing as America becomes more diverse. Making America great isn’t what it used to be, but that doesn’t mean we can’t stick to conservative principles. We just have to bring them into the 21st Century.

How do you adhere to tradition while embracing change?

Ted Cruz and John Kasich’s concession speeches spoke to why the GOP is becoming an anachronism. Traditional religious values are hard to pit against an evolving society that increasingly relies on other beliefs and traditions to guide its decisions.

Unless you are a bum, an illegal, or a terrorist, there is almost nothing that can’t be provided under the umbrella of conservative values. Republicans just have to follow a few simple rules to keep themselves out of trouble. For example:

We don’t need government to enforce values and regulate our culture.

Religion shouldn’t be used to deny rights or privileges to one group in favor of another.

Moral values dictate that health care should not be unaffordable. That doesn’t mean government should control it. It means conservatives shouldn’t stand by and do nothing until someone else wrecks our health care system for them.

Religion is not meant to oppress and shouldn’t be used by government for that purpose any more than minorities should be allowed to oppress the majority.

If you are going to hate people hate them for the bad things that they do, not for who they are or what they believe.

That last one? If we could set it aside and look to the future we might put a Republican in the Oval Office, maybe even Donald Trump. Too much conservative anger is focused on groups that violate traditional values Americans are leaving behind. Unless the GOP finds a way to incorporate modern values into conservatism the party will vanish along with the values that killed it.

UPDATE May 13, 2016: Ryan and Trump made a big deal of their meeting yesterday. Both scored lots of publicity points. Ryan is toying with Trump and the people. He has to know he will buckle sooner or later, but it’s a perfect time for a power play.

Does our speaker still have designs on the convention? It seems that way. Ryan wants to be appeased and that, apparently, hasn’t happened to his satisfaction just yet.

Early in the race there was talk of a Paul Ryan candidacy. If the speaker wanted to run the show he had his chance. Setting the stage for hostilities more suited to partisanship is a bad way to sell his party to the nation.

Despite talk of party leaders warming up to Trump, this seems like further confirmation that Republicans would be happier losing the race and using Capitol Hill to stop Hillary Clinton in her tracks.