Conservatives had a good chance to win the presidency this year. That opportunity is being flushed away as surely as Mitt Romney’s anti-Trump appearance made us look like fools incapable of uniting behind a common vision. After two terms of Barack Obama how can this happen? Because of Republican dishonesty. The party isn’t honest with voters who are sold an agenda upper echelon decision makers don’t stand behind. This is turning the GOP into a political throwback, a party facing extinction. 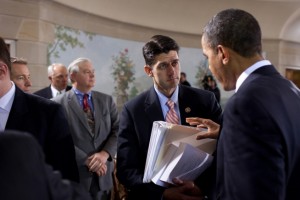 While watching The Big Short I wondered whether the film was a drama or a well-disguised Michael Moore documentary. The financial collapse was a lot more complicated than banks feeding into Wall Street greed and not caring about ordinary people. This was an agenda picture, but as I watched bankers and brokers come to the realization that they had destroyed the phony wealth they created I thought not of Wall Street greed but of Republican dishonesty. Our conservative hopes are being destroyed by the same things that were at the heart of the financial sector’s collapse: selfishness, self-interest, and duplicity.

You can only fool yourself for so long. With Wall Street the delusions came to an end in 2007. With the GOP the dream ends every four years and is about to be crushed again.

Republican dishonesty: don’t wave the flag if you don’t mean it

GOP leaders aren’t naïve. They aren’t stupid. They are duplicitous and manipulative, just like their opponents. They yank the strings of the party faithful so they can stay in power.

Democrats promise upward mobility. They don’t deliver. Republicans wave the flag and bow to Christianity and the Constitution because they know that’s what they need to say. After the party gets our votes and our money, its leaders sell out to Democrats because it keeps them entrenched.

That sellout is the ago-old conflict of every politician. It is at the heart of Republican dishonesty, whether it’s courting the Hispanic vote after Romney’s 2012 election loss or the Einsteinesque insanity of repeatedly voting to repeal the Affordable Care Act. What America’s conservatives want is reflected a lot more in their support for Donald Trump than for the gibberish being spouted by party mouthpieces like Paul Ryan, Mitch McConnell, or a recently departed John Boehner. You shouldn’t wave the flag if you won’t stand behind your words. Voters will exact their revenge. That’s how we got Trump, who is in the process of touching off the biggest GOP sellout yet.

Muslims and the Constitution: say that again, Mr. Speaker?

One day after Trump’s suggestion that we restrict Muslims traveling to the U.S., House Speaker Paul Ryan took a swipe at the Republican front-runner:

Normally, I do not comment on what’s going on in the presidential election. I will take an exception today. This is not conservatism. What was proposed yesterday is not what this party stands for and, more importantly, it’s not what this country stands for. 2

He then attributed our democratic values to Muslims:

Some of our best and biggest allies in this struggle and fight against radical Islamic terror are Muslims, the vast, vast, vast, vast majority of whom are peaceful, who believe in pluralism, freedom, democracy, individual rights.3

Do the “vast majority” embrace these values? That’s not what we see in the rioting that results from perceived affronts to Islam. 100% of Muslims who wish us harm don’t respect our values. Conservatives digested the news that ISIS caught us with our pants down. We listened to coverage of attacks in this country, including the Boston Marathon bombing, that were caused by the way this peaceful religion views non-Muslims. Voters supporting Trump are not only smart enough to know this is Democratic-style PC appeasement, we are justifiably suspicious that U.S. security policies may be working because of luck more than anything else and that security, not freedom and rights, is the issue we are being diverted from.

For better or worse, Trump is offering an alternative. Does the party have a right to deny us that choice?

What do heroin and a Supreme Court vacancy have in common?

Mitch McConnell has been practicing his own breed of Republican dishonesty. Lately he has invoked the voice of conservatives even though the GOP-led House and Senate have failed to accomplish the goals the people have been promised, from repealing Obamacare to dealing with illegal immigrants.

Drugs have been reliable for bringing Capitol Hill together all the way back to the days of Reagan and Congress’s fear of appearing soft by not saying “no” loudly enough. The heavily politicized heroin epidemic is a gift to bipartisanship, which isn’t saying much but we have to take what we can get. The Comprehensive Addiction and Recovery Act passed by the Senate will be an election year victory both parties can claim. Unfortunately, most Americans are not heroin addicts or opioid abusers. We are taxpayers sick of finding out how little we matter and how stupid our party thinks we are.

Our clever Senate majority leader managed to tie the heroin epidemic to his refusal to deal with an Obama Supreme Court pick. Citing success on the heroin bill, McConnell opined:

Now Senators have a choice. Senators can endlessly debate an issue where the parties don’t agree, or they can keep working together in the areas where we do.

Heroin wins, Garland loses, at lease for the time being. Is this what the voice of the people wants? A handful of less obstructive GOP Senators have indicated their willingness to at least consider Obama’s pick. This is a smart move, given that Democrats have successfully accused the GOP of blocking progress. In this instance the only argument Republicans have is payback. When they lose the election in November, do they think Hillary will present a better choice?

Whether it’s high finance or high politics, in the end it’s all about trust. Trust that your investments will do well and have more than fraud backing them. Trust that the politicians you elect will do what they say. Most important, trust that what you hear from the leaders of your party is based on what you want, not maintaining their power base and détente with the opposition.

Suffice it to say that after blaming the financial sector for the destruction of the Western world Democrats gave us little more than Dodd-Frank, though that juggernaut was enough. The prisons aren’t overflowing with white collar financial criminals. Financiers were never pilloried or forced to parade up and down the streets of New York in hair shirts. Congress had its dog and pony show with those they chose as symbols of the crisis, then Obama and company moved on to other things. Now we hear about Wall Street fraud and a Republican resurgence at election time. One is old business. The other seems more and more like a pipe dream.

Contested convention threats are the height of Republican dishonesty

After spending the last few years predicting its own failure at the hands of the unindictable Hillary Clinton, the Republican elite are gearing up for a contested convention. Fear that the party might actually have to defend the ideals it claims to believe in with someone like Donald Trump threatening the establishment must be too overwhelming to manage, something akin to making good on mortgage securities financiers knew were backed by nothing. It certainly speaks to Republican dishonesty. Wouldn’t it be more forthright to just tell us losing is better because it provides the safety of an excuse for failure and doesn’t rock the comfortable power structure in Washington?

UPDATE March 22, 2016: Ironically, today ISIS gave Trump the boost too many Republicans have refused to offer. Banning Muslim travel to the U.S. is going to seem a lot more appealing after the dust settles in Brussels.