No, the world does not want to live in peace and harmony. That’s not how it works. People, communities, and nations are all scrabbling for whatever they can get. Some are responsible about it. Some are not. We just experienced the consequences of tolerating those who aren’t. Once the spurious arguments over gun control are out of the way, Americans are going to get comfortable blaming what happened in California on radicalization, a catchall that avoids the truth: this is simply another take on radical Muslim public policy we have seen elsewhere, transplanted to America.

Radicalization of Muslims? Not exactly.

Our most recent terror attack handed a veritable feast of policymaking options to Washington. On the agenda will be the inevitable pre-election crusade to crack down on gun ownership. This opportunity will push in front of changes to visa laws and plans to bring Muslim refugees onto our soil because for the moment gun control trumps liberal immigration policy as good Democratic politics. None of the policy options you will hear about are going to solve the problem of radicalization of those we invited in, not that it matters much. It isn’t a problem we are likely to solve.

Does mass radicalization exist, or is it an excuse to pardon Islam as a whole? America needs to come to the realization that peace-loving friends and neighbors turning into violent extremists frothing at the mouth in search of someone to kill may not be quite how it works. The truth may be closer to a Muslim version of turning a far left liberal into a far right conservative, with catastrophic consequences. Think of it as a Middle Eastern mechanism to implement global Islamic public policy right here at home. 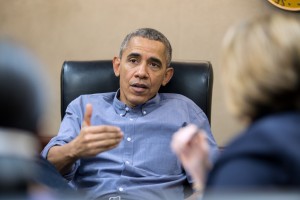 Muslim public policy? Don’t ignore it. It’s not going away.

The president missed the point when he observed that the shooters in San Bernardino may have been radicalized.1 We need to get the whole radicalization fantasy out of our heads and see it for what it is: a shift in perspective on a global scale, not mind control, as suggested by this statement in a White House fact sheet on online radicalization:

Violent extremists use the Internet to recruit and radicalize Americans to commit acts of violence.2

We should all take offense that the word “Americans” is substituted for “Muslims,” given that being a domestic jihadist doesn’t make you a citizen. The phrasing is no surprise, given our efforts not to offend. Despite the mounting bloodshed, denial still has a lot to do with how this is going to play out. When it comes to Islam, denial has guided our domestic and foreign policy for far too long while radical public policy tries to get the upper hand.

While ISIS grew, the White House announced a new “inter-agency working group” to counter online extremist threats. The plans to counter radicalization online sounded a lot like all the other plans we hear about for important policy issues, including collaborating with communities and “local organizations.” 3

As a starting point to prevent online radicalization to violence in the homeland, the Federal Government initially will focus on raising awareness about the threat and providing communities with practical information and tools for staying safe online. In this process, we will work closely with the technology industry to consider policies, technologies, and tools that can help counter violent extremism online.4

A lot of us have tools for staying safe online, including security programs and firewalls. They don’t work very well when it comes to blocking the flow of ideas, if radical ideas truly are the problem. They certainly don’t block bullets. Nevertheless, the “Countering Violent Extremism” summit held earlier this year suggested that stifling radical rhetoric might be an effective deterrent, utilizing community engagement for:

Of course, clamping down on violent rhetoric cuts in both directions, as we found out from the Justice Department last week.

Attorney General Loretta Lynch’s vow to go after those engaging in potentially violent, anti-Muslim discourse6 reeked of agenda and constitutes an unacceptable threat to our freedom of speech. No matter how much the Obama administration wants to keep Islam off the hook for violent, global extremism, events in the real world tell a different story. Muslim radicalization is part of Islam and wouldn’t exist without it. That doesn’t imply that most Muslims are violent, but if the White House stance on online radicalization speaks the truth, then we have something to worry about because anyone can be turned into a jihadist simply by turning on their computer.

The other threat to our freedom comes if we turn to hate and restrict our actions and the actions of other Americans because of terror. A lot of how we respond to the attack in California will depend on how the Federal Government manages public policy and global anti-terror strategy in the weeks and months to come.

Which is a bigger threat, radicalization of people we are assured are good and pose no threat, or the more believable possibility that people exist who are ready for violence because they want to spread their oppressive, faith-based political beliefs as far and wide as possible and turn them into Islamic public policy for all to adhere to? They don’t require being “radicalized” to do it. If we want to keep the people of this country safe, we have to buy into the second threat, no matter how much we fear what it implies. Telling people to stay away from their computers and think only good, non-jihadist thoughts is not going to get the job done.