Baby Boomers are still getting over their scorched retinas and flashbacks. We’ve been through the ups and down of America’s fondness for meth, which means when you get a cold you have to sign your name to feel better. Marijuana was the bane of our youth. Now it’s quasi-legal, taxable fun. In 2017 the drug crisis of choice is a difficult to spell catchall for narcotic pain killers and a windfall for Congress because it’s something both sides can agree on: an opioid drug epidemic. 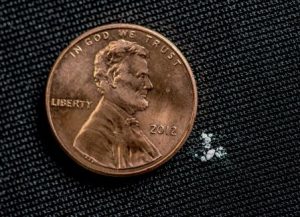 Fentanyl kills, but is
epidemic too good to be true?
Courtesy DEA

Opioid drug epidemic: off to the races again

When a drug epidemic rears its head Washington cracks down. Sometimes we overreach. We spend a lot of money. The returns can be questionable and might be laced with regret.

Congress is finding some common ground in the opioid drug epidemic because it kills Americans. No politician wants to be in favor of that.

When Ohio Representative Tim Ryan (D-OH) introduced the Stop Trafficking in Fentanyl Act of 2017 did he forget what happened with the crack epidemic when he argued for a dramatic increase in penalties?

The Stop Trafficking in Fentanyl Act would reduce the amount of fentanyl needed to invoke the most serious trafficking penalties for an individual trafficking and manufacturing the drug. The bill would lower the threshold that triggers federal penalties from 400 grams to 20 grams to ensure that the law appropriately reflects the extreme strength of the drug, which can be fatal in doses as small as 0.25 mg.1

We’ve been here more than once. During the meth epidemic children entered into the punishment argument:

The bill, H.R. 1616, would double the maximum jail time from 10 to 20 years for those convicted of producing or trafficking methamphetamines or other illegal drugs in the presence of children.2

When Democrats announced 12 new bills to deal with Washington’s opioid drug epidemic children made that list too, thanks to a cough medication most of us didn’t know we could abuse:

Congress must not wait for tragic stories of children being hurt due to DXM abuse before we act.3

We regretted crack epidemic sentencing because it brought us headlines like this:

Where did these kinds of sentences come from? Congresswoman Maxine Waters (D-CA) reminds us:

In the Anti-Drug Abuse Act of 1986, and at the height of the public outcry over crack-cocaine following the tragic death of college basketball star Len Bias, Congress acted hastily, without sufficient hearings or research, and enacted hard line anti-drug penalties that targeted low-level drug offenders.5

Those remarks were part of the campaign to back off on mandatory minimum penalties for crack that dragged fairness and race into drug enforcement.

This time lawmakers have a real, live company instead of a real, live inner city drug pusher to go after. That should please Democrats and will drag Republicans into the fray, too.

Concerned members of Congress have a much better target than minority communities to spotlight the opioid epidemic. The focus of their investigation is West Virginia, a small state we wouldn’t ordinarily think of when we think of the drug trade.

Members of the Energy and Commerce Committee sent a letter to Miami-Luken, Inc.6 asking for information on alleged pill dumping in the state and surrounding areas. This feels like a tip of the iceberg sort of thing that could get a lot larger as investigators dig deeper and catch more companies with their pants down.

Should you abuse opioids or drive your car?

In an op-ed for Morning Consult, Congressman Greg Walden (R-OR) pointed out that 91 people are lost each day because of the opioid drug epidemic. That’s almost the same as the 90 people the CDC reports are killed daily in car crashes, a rate higher than in 19 other high-income countries.7

Not to worry. You get to keep your car. Congress has other things to worry about including letting you keep your cancer. That disease is estimated to have killed 595,690 people in 2016,8 equivalent to over 1,600 per day.

Nothing beats a drug crisis, though, and the opioid drug epidemic has all the hallmarks of a good one. The opportunity to drag private companies into the mix on top of the usual cries for penalties, social services, treatment, and lots of spending makes this one all the better.

One question. If you aren’t an opioid abuser and manage to survive a car wreck or find out that you have cancer, what are you going to be allowed to take for pain after the opioid epidemic runs its course, lawmakers overreach, and doctors are afraid to prescribe pain killers?

There is always medical marijuana, I suppose.

When the first reason to pass a bill is political and comes from the bill’s sponsor we should be wary.

Today, to address a number of critical shortcomings of our nation’s approach to combating the opioid epidemic, including the Administration’s unwillingness to make a long-term investment in the fight, U.S. Senators Jeanne Shaheen (D-NH) and Maggie Hassan (D-NH) joined 13 of their Democratic colleagues in introducing the Combating the Opioid Epidemic Act.9

The money would go to “prevention, detection, surveillance and treatment of opioids.”10 As of this morning there was no bill text on Congress.gov, but Senator Shaheen’s press release lists ways for $45 billion in taxpayer dollars to score a blow against opioids for the Democratic Party.

A second bill was introduced yesterday by Pennsylvania Senator Bob Casey. S.2004 asks us to “increase funding for the State response to the opioid misuse crisis and to provide funding for research on addiction and pain related to the substance misuse crisis.”11 This one netted 16 cosponsors but details aren’t available yet. Expect more hefty spending suggestions to fight this expanding political crisis.

What did he add to Washington’s drug epidemic?

We can finally end the criticism of Trump not acting like a proper politician. He joined the club on Thursday to prove he’s not soft on drugs.

The president’s speech on “Combatting Drug Demand and the Opioid Crisis”12 was the usual call to war we hear when professional politicians have to get behind something everyone is afraid to not speak out about. The nation could use a dose of unity. Drugs are as good a source as any.

We have lots of national health emergencies. This is just one of them, but a drug war is also a political war and that makes it more important than the other things that take American lives.

Are these Trump’s numbers?
Courtesy NIDA

This is really Congress’s game. The White House can only do so much, but it should start by getting its numbers straight. Are drug overdoses really “the leading cause of unintentional death in the United States by far?”13

I would argue that there is nothing unintentional about death by addiction. That doesn’t mean we don’t have to do something about it, but it doesn’t mean the government should take over because the individual is powerless in the face of murderous opioids and the big, bad pharmaceutical industry, either. 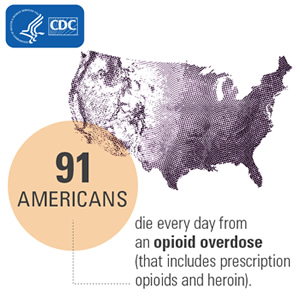 Let’s take the president’s remark about 175 daily overdose deaths at face value. Heart disease has topped cause of death lists for a very long time. Unless you are addicted to fast food and the living room couch, dropping dead of a heart attack is a pretty unintentional way to die. 610,000 people die from heart disease each year, which is 1,600 every day.14

A 2017 CDC report sticks to its figure of 52,404 deaths from drug overdoses with 63.1% of these from opioids.15 That’s about the same number as annual car crash deaths.

The president’s numbers also come from the CDC and are backed by the National Institute on Drug Abuse, but his 175 per day figure for overdose deaths includes cocaine and methamphetamine.

Trump’s statement that he would be “pushing the concept of non-addictive painkillers very, very hard.” is troubling. The government’s intervention in health care hasn’t done us a lot of favors. Politics creates reality better than it deals with facts. That’s why we have 0 grams of trans fat on labels for foods that contain trans fat. It’s also why “prehypertension” became a new class of blood pressure problems for pharmaceutical companies eager to make sure everyone in the country is taking blood pressure reducers.

Now it’s opioids. I’ll ask the same question I asked earlier in this post. Do you really want the Federal Government to decide what you can take the next time you snap your leg on the ski slope?