Conservatives still get excited talking about an Obama impeachment six years into a presidency rife with abuses of power no one has been able to stop. We can’t expect much from members of Congress while they spend the next few months trying to keep their jobs, but even if the GOP takes the Senate this fall do we want to suffer the damage an Obama impeachment would bring to a country already stirred up over race and inequality? A scorched earth strategy got the job done during the Nixon years, but things have changed.

The thinking behind the president’s abuse of power isn’t even remotely similar to what dethroned Richard Nixon. The mistakes that brought Nixon down were directed at his political enemies. Nixon said he wasn’t a quitter, but he knew when the jig was up and it was time to leave. From his perspective, enemies had gotten the better of his presidency and were going to have their way no matter what he did. Obama has gone completely around his opponents. His abuse of power is directed at us.

With an approval rating that pits more than half of the country against him, the president still felt empowered to taunt Republicans over John Boehner’s threat of a lawsuit (see: Boehner’s Threats to Obama End as GOP House Gives Up). He should be laughing at the GOP. He’s gotten away with every order he’s passed even though polls show that abusing the power of his office and trampling the Constitution for the good of the people hasn’t boosted the country’s opinion.

With Congress off on summer vacation, the time is ripe for more executive actions that flaunt the law and disregard our separation of powers. The president’s agenda for the country has become more important than the country he thinks he’s improving. This is the same kind of leadership that justified absorbing Congress’s time during record high unemployment with the health care bill and then going around Congress to tweak the bill by changing provisions like the individual mandate. It is the same leadership that has chewed up inestimable amounts of effort trying to confer quasi-citizenship on as many illegal foreigners as possible without using our legislative process.

Obama’s abuse of power is social and economic. 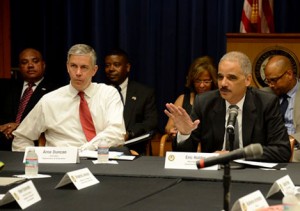 Nixon’s war on the Constitution was defensive. His abuse of power was flagrant and foul but it wasn’t directed at the people. His actions were not based on social or economic policy. Obama’s abuses come from an inexperienced leader bred in Illinois’ political sewer who doesn’t know how to get what he wants without trampling or outright ignoring our system of checks and balances. Instead, he has put himself in the middle of a war he created between government and the people.

It is too easy to draw connections between the impeachment articles against Nixon and a possible Obama impeachment. Nixon’s sins included surveillance and using the IRS against his enemies, but Obama’s most flagrant and damaging abuses of power involve going after a country and institutions that don’t live up to his vision. He has elevated himself to the position of arbiter of what is just and right, wielding his Education-Justice-Homeland Security Cabinet Cabal to do the dirty work in service to equality and opportunity. The international scene is little better. Our intervention in Syria and Libya aside, will the White House be able to justify not asking Congress from the start when our inevitable, deeper involvement in Iraq grows from last week’s airstrikes and humanitarian assistance?

An Obama impeachment is the wrong solution at the right time.

We did it to Nixon. We did it to Clinton. Many of us would like to see an Obama impeachment, too, but impeachment is an inelegant solution to a fundamental flaw in our system of government: elected officials are hard to get rid of. As we discovered with Bill Clinton, even public embarrassment, ridicule, shame, and humiliation don’t guarantee a president will make a dignified exit if he doesn’t want to leave. That’s where Nixon deserves a shred of credit. As he pointed out in his resignation speech, impeachment absorbs too much of Congress’s time when lawmakers should be doing other things.

Is Nixon’s remark about Congress still valid in a country where manipulating race, inequality, and opportunity have become hallmarks of a leader who believes it is his job to take the place of the legislature, promising:

President Obama is taking action to help ensure opportunity for all Americans.2

Securing that opportunity has come to mean not faithfully executing our laws and going around our legislature whenever possible. The president knows what he can get away with and has been cultivating a divisive social, economic, and racial climate from day one. If Nixon pondered what impeachment would do to America, just imagine the fallout from an Obama impeachment, a fantasy conservatives still indulge even as this presidency enters its final years.