Home » American Ideals and Values » No Christmas for America This Year. We Don’t Deserve It.

Can you imagine a bigger disappointment for a child than a year with no Christmas? What if December 25, 2016 was just like any other day? No hope for presents, lights, trees, carols, Christmas cookies, or stockings until next year.

No child deserves that, but America does. Our behavior this year should mean no Christmas until 2017. 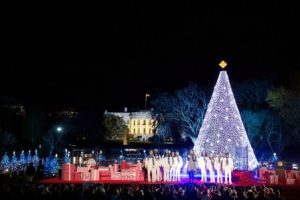 No hope, just a legacy of division

By now everyone knows Michelle Obama’s sentiments as her husband wraps up his eight-year stint in the Oval Office: no hope. I’m not sure who the “we” is that she was referring to. There is no “we” anymore. The Obamas helped see to that. There is the right and there is the left. The differences between the two are all but irreconcilable. That’s the legacy we are left with.

Barack and Michelle Obama are old business now and they are not the whole problem, anyway. To his credit, I never believed that Mr. Obama didn’t comport himself with integrity even if many of us disagreed with what he did. As with most presidents he acted according to his beliefs and did what he thought was right.

When it came to hope and change he failed. In the midst of that failure the nation decided to eat itself alive. This year’s outpouring of venom across the partisan divide has been astounding. Had Hitler risen from the grave to win the 2016 race I don’t see how the response could have been more hateful than what is still being directed at incoming President Trump.

That’s our fault, not Obama’s. He unwittingly gave us the excuse to hate and even attack each other, but he never forced us to do anything except buy health insurance.

The “we” mistake: what no hope really is

Mrs. Obama claimed there is no hope. She’s a bright woman, so I have to assume that instead of lapping up the propaganda her party has been spreading around she is once again making the “we” mistake.

The Obamas are spending the holidays in Hawaii. Back in their home town and in other big cities people are killing each other. That’s what no hope is really about: shootings, poverty, and ruined lives. A shift in ideology is just smoke and mirrors, politics as usual. Democrats and Obama had their chance. If the lives of their supplicants improved, we haven’t seen it.

No Christmas this year

If we really are a collective “we” then no Christmas is what the country deserves. We should be ashamed. The fact is that America didn’t live up to its promise this year. The battle for control of the country made us forget who we are and what we mean. We allowed ourselves to be separated by our worst elements, politicians who sniffed opportunity, grabbed it, and lost.

Forget celebrating joy, peace, and hope. Instead, the nation should spend some time thinking about how important these things are and how to get them back. It’s not as if we were choosing between a Jefferson, Adams, or Franklin. It didn’t matter. We turned on each other like junkyard dogs over a tainted politician, a businessman with a talent for making people angry, and the fake news swirling around both. There is no hope for our future to be found in that.

In 2016 we discovered reason after reason to hate each other. We created enemies out of our own people. Our union was betrayed. We are ending the year as divided and angry as we’ve ever been.

I can understand how leaving the White House could make Mrs. Obama feel a loss of hope. Giving up her status as Washington royalty replete with designer dresses, celebrity visitors, and holidays in Hawaii while Chicagoans back home kill each other defines what was wrong with this presidency. In the end it boils down to not understanding what “we” really means. It doesn’t mean portraying yourself as one with the beleaguered masses you didn’t help. Only a fool would believe that there is a greater distance between Obama and Trump than there is between the Obamas and the poverty-stricken people who live in their hometown.

Failing to understand that difference and hating each other because of it is what we have lost. Until we get it back, no Christmas is what America deserves.