Author’s note Sunday morning, June 23, 2019: the promising new immigration news I wrote about on Friday was just stomped on by some really bad news and a very misguided decision from the White House yesterday. An update follows my original post.

We finally have some new immigration news that isn’t about a federal judge blocking White House policies or Democrats finding a new way to open our nation’s doors wider. Instead, recent developments brought badly needed victories to conservatives. They also brought hope that we might do something to tackle our massive, politically-generated illegal immigration problem instead of forcing a crisis that will inevitably drop into the Democratic Party’s lap.

Let’s start with a new announcement from USCIS, the agency that safeguards our immigration system. 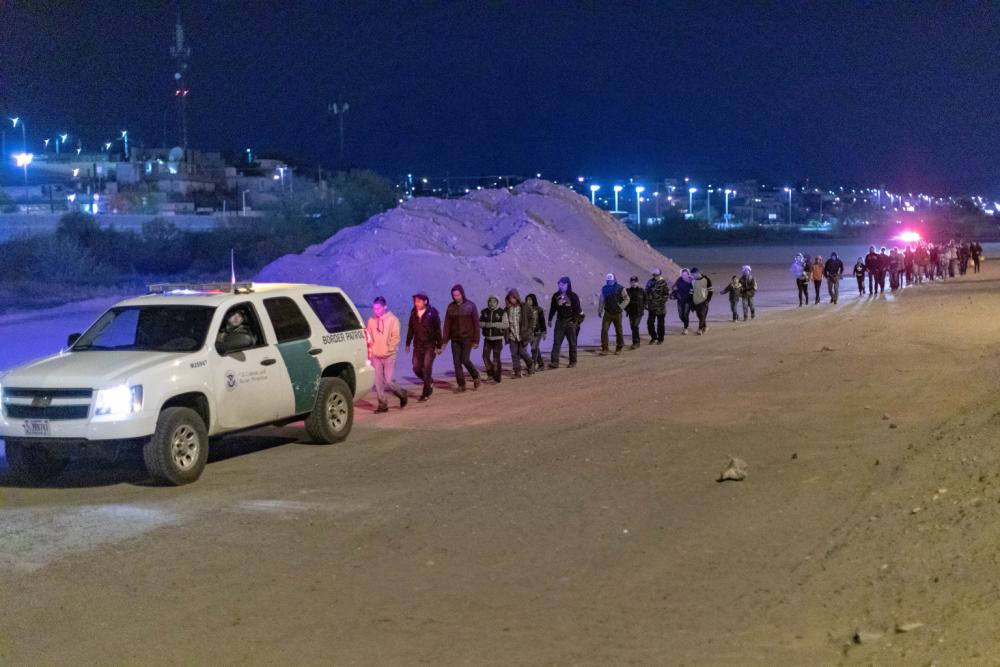 In the same week that Florida struck a blow for conservatives with its new anti-sanctuary bill, USCIS announced that anti-birthright citizenship hard-liner Ken Cuccinelli is the agency’s new acting director.

We can measure how good this news is by the Democratic Party response. In addition to their efforts to nullify the appointment under the Federal Vacancies Reform Act, party members showed their hand as soon as the announcement was made.

TJ Cox (D-CA) confused Cuccinelli’s qualifications with his likely refusal to do the Democratic Party’s bidding:

Once again President Trump has appointed another head of agency who is grossly unqualified for the position. Clearly, the president chose Ken Cuccinelli because he will carry out the most heinous aspects of this administration’s immigration agenda without question.1

There was more confusion about the difference between the law and an anti-immigrant agenda:

Mr. Cuccinelli is an anti-immigrant fringe figure that has no business leading a component that is supposed to administer our Nation’s legal immigration system.2

Then the “E”-word came out, as it usually does when a conservative butts heads with Democrats:

While Democrats flapped their lips Cuccinelli got down to the business of enforcing a new presidential order directed at sponsors of aliens meant to ensure that immigrants won’t become wards of U.S. taxpayers:

The sponsor must be willing and able to financially support the intending immigrant as outlined by law and regulations (see INA 213A and 8 CFR 213a). If the sponsored immigrant receives any federal means-tested public benefits, the sponsor will be expected to reimburse the benefits-granting agency for every dollar of benefits received by the immigrant.4

That’s going to be a tough one for some lawmakers to swallow, considering their efforts are directed at shifting the illegal immigrant care and feeding burden onto U.S. taxpayers.

Fortunately, with Obama agency heads out of the picture states have more freedom to protect their legal, taxpaying residents. That good news just hit home in another state.

Florida steps up, says no to being an illegal sanctuary

Why do we tolerate Capitol Hill’s support for pseudo amnesty to fix a problem Democrats created?

To enhance national security and encourage more efficient immigration enforcement, Democrats have proposed a cap on the number of ICE detention beds associated with interior enforcement. This cap will force the Trump administration to prioritize arresting and deporting serious criminals, not law-abiding immigrants.5

On June 14, 2019 Governor Ron DeSantis put pen to paper. His state became the newest to step up and say no to keeping illegal immigrants out of the hands of law enforcement. Instead of refusing to work with federal officers, SB 168 requires Florida law enforcement personnel to comply with federal immigration regulations. This is a complete reversal from the Obama years when the president’s oversight meant lawsuits for states that passed laws to protect their residents from federal pro-illegal immigration directives.

Florida isn’t the only state to pass an anti-sanctuary law, but this is positive news that signals to other states that the world won’t end if you don’t pander to demands from Democrats in the service of activists with nothing to lose no matter how extreme their demands.

One of those demands is neutering ICE, the agency Democrats vilify for serving the people by doing its job.

ICE’s IMAGE (Mutual Agreement Between Government and Employers) Program has been around since July 2006 to:

reduce unauthorized employment and the use of fraudulent identity documents.6

If you think no one could possibly have a problem with that, you are wrong.

Despite evidence of massive identity fraud the Obama years brought acceptance of illegal immigrants working as a matter of right. We enforce labor laws that guarantee the federal minimum wage to workers who should not be working and who steal the identities of citizens to do it.

If this doesn’t concern you, it should:

This is not a victimless crime,” said Derek N. Benner, Acting Executive Associate Director for HSI. “Unauthorized workers often use stolen identities of legal U.S. workers, which can significantly impact the identity theft victim’s credit, medical records and other aspects of their everyday life.”8

Despite its role in protecting who you are, most Americans have probably never heard of IMAGE. Recently five more companies in New York signed on. This is a big deal in a state with our largest sanctuary city. New York lawmakers are also considering sanctuary state bill S05242, the “Dignity for Immigrants in New York State Act” to protect illegal aliens from federal authorities.

It takes a lot of courage against this liberal backdrop to step up and participate in an ICE program. Damnation rains down on those brave enough to buck liberal America’s endorsement of illegal immigration, but the more who do it the more we will accept how unsustainable the current free-for-all is.

It also takes a lot of courage to ensure foreign aid benefits the taxpayers who provide it.

It wasn’t a threat. The president made good on his words. We just slashed foreign aid to three big Central American immigration offenders. That’s bad news for El Salvador, Honduras, and Guatemala.

The response was predictable. We heard the “E”-word again, coupled with a veiled insult to Americans who support Trump:

President Trump’s decision to cut funding for poverty and violence-reducing programs that mitigate the root causes of migration proves that this policy is purely about satisfying extreme elements in his political base.9

Democrats were warned long ago that this was coming. Instead of just doing nothing they pushed the envelope even farther and pulled out every trick in the book to ensure the continued flow of migrants into the U.S.

The good news is that while it’s not easy for the White House to punish the majority party in the House, it’s not that hard to punish those whose sanctuary policies encourage the border crisis.

Sweep to deport millions is in the works

There was more great immigration news for conservatives this week. A sweep is on the way to round up illegals hiding out in big cities who have their final get out now order but are still walking around in public thanks to the absurdities of U.S. immigration law.

That’s not how we treat U.S. citizens. When the gavel comes down and declares you guilty the bailiff walks you out of the back of the courtroom to a room with bars.

Local authorities can refuse to cooperate with the feds, but that doesn’t prevent ICE from doing its job. It just makes it more difficult and compromises the safety of citizens who are far less important than the illegals who have a distinct advantage thanks to dangerous Democratic policies.

UPDATE June 21, 2019: a few hours after I published this post the news was all over the Internet. Sunday is the day for the deportation sweep to begin, or at least that’s what’s being reported. I don’t know why ICE would warn about this in advance unless they have other plans in mind or it was leaked, but one way or the other we’re about to find out.

Bad news: a state where illegal immigrants are even more welcome

UPDATE June 22, 2019. We have to expect some bad with the good. As news of the pending ICE deportation sweep reverberated through liberal America, Illinois Governor JB Pritzker quickly signed three bills to make life more secure for illegal immigrants in his state.

Chicago’s new mayor didn’t waste any time, either. The Hill reports that Lori Lightfoot won’t allow ICE to use city data to assist enforcement efforts. Lightfoot didn’t say whether they needed this information to get the job done. It seems highly unlikely that her city keeps track of its illegal immigrant population and Chicago has resisted federal enforcement for years.

Citizens and taxpayers get burned

We heard it from Pritzker. We’re hearing it from Lightfoot and we heard it from Rahm Emmanuel, too. Illinois is a welcoming city and state, or at least it welcomes illegal immigrants who pay consumption and other taxes this destitute, Democratic mess so desperately needs so it can keep spending on things like more illegals.

Here are examples of the people Illinois public officials protect despite ICE’s best efforts to secure the homeland for law-abiding citizens and legal residents.

Did Trump just make all this good immigration news meaningless?

UPDATE June 23, 2019: Surprise, America! It was just a threat to bring Democrats to the bargaining table. No deportations for two more weeks and besides it was only thousands, not millions.

What was the president thinking? Did he hope he would get some credit for backing off on a deportation order that affected only a very small fraction of our illegal and most important, sanctuary city population? Does he think Democrats will compromise, do a complete about face, and negotiate a responsible solution for the border crisis? Is he signaling that a border solution will pardon illegals already living, working and stealing identities in our nation’s interior or that we will ignore those who have committed crimes?

This is the kind of response we can expect from House Democrats first thing on Monday morning. Give Rep. David Cicilline (D-RI) credit for jumping on this one early:

It’s now clear that the President is using immigrant families as a bargaining chip to force taxpayers to build him an expensive, ineffective wall on the U.S.-Mexico border.12

This is bad news for conservatives and an appallingly misguided move by the White House. Democrats will use this as an opportunity to push their plan for comprehensive immigration amnesty. Republicans will say no. Trump will be forced to stick to his words, except now the media will have two more weeks to blast the administration for the removal threat and cities like Chicago will have time to mobilize.

The U.S. immigration crisis is not analogous to the Iran crisis, Mr. President. The strategy that works for one won’t necessarily work for the other, as we’re going to discover in great detail over the next two weeks.

8. “ICE delivers more than 5,200 I-9 audit notices to businesses across the US in 2-phase nationwide operation.” U.S. Immigration and Customs Enforcement. July 24, 2018. https://www.ice.gov/news/releases/ice-delivers-more-5200-i-9-audit-notices-businesses-across-us-2-phase-nationwide, retrieved June 18, 2019.