Democrats will argue until they are blue in the face that Trump promotes nativism. The simple fact is that their ceaseless pandering now extends beyond U.S. borders and is the reason nativist values will appeal to Americans who have a brain and a wallet.

Nativism is an arcane, archaic belief. It’s not about white supremacy or racism, though no doubt you have heard that these things are inextricably linked. Nativist policies ostensibly protect a country’s native-born residents from foreign-born immigrants. Unless we’re talking about protecting Elizabeth Warren and her Native American brothers and sisters the concept isn’t really relevant to a political dialogue that justifies open borders with the fact that we all came from immigrants.

The people we need to be protected from are Democrats. If they didn’t exist we wouldn’t have an immigration problem. 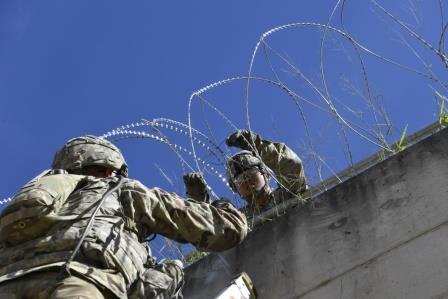 Nativism or protecting us from Democrats?
DoD photo by Daniel Hernandez*

When they apply the nativist label Democrats are really talking about xenophobia, a label they have all but worn out over the past two years.

California Rep. Allen Lowenthal got it wrong after the 2018 State of the Union:

These draconian immigration proposals, all in the name of xenophobia and nativism, are wholly un-American and run counter to who we are as a nation. I cannot support these attacks on our immigrant communities and such divisive and destructive immigration policies.1

The congressman forgot that his party also claims to value the rule of law, especially when it can be used to go after Trump:

His threat against Mueller should not be a partisan struggle. This is not about Republican laws or Democratic laws. It is about the rule of law. And we will not let Trump make our Constitution as worthless as a degree from Trump University.2

We will, however, let Democrats pervert the rule of law to make immigration policies worthless. That’s a good way to get the nativist ball rolling.

Liberal nation of immigrants rhetoric is so agenda-laden that it no longer has anything to do with our roots. It’s used to excuse illegal behavior and shame us into forgiving border jumpers and foreign nationals who attack the same law enforcement personnel Democrats vowed to support until lawmakers embraced the anti-ICE crusade.

Charges of nativism came from Capitol Hill even before Trump had a chance to turn on the Oval Office lights. Extremist Rep. Jan Schakowsky (D-IL) spread fear just days after the president was sworn in:

By recognizing the value and dignity of our immigrant brothers and sisters, our city [Chicago] is keeping the promise inscribed on the Statue of Liberty – that our country welcomes ‘the tired, the poor, and the huddled masses yearning to be free.’ The President’s nativist, anti-immigrant agenda contradicts our nation’s founding principles, and will endanger families and communities across the country.3

What Democrats don’t realize is that helping the poor is another way they encourage and promote nativism without even realizing it. Someone has to foot the tab for these poor, huddled immigrant masses.

No doctors or physicists in this caravan

Americans saw rock throwing and tear gas at the border last weekend from migrants who demanded entry and didn’t get their better lives fast enough even though Democrats and a California federal judge assured them of their right to rubber stamp asylum.

Are these people the future of our nation? That depends on who you ask and what they have to gain.

America has experienced spasms of nativism at different times in our history, and over time we have always risen above them and returned to our core values. Now is the time to pull together to restore our particularly American values of tolerance and diversity.4

That was part of Durbin’s commemoration of the “one-week anniversary”5 of the Tree of Life synagogue attack, an incident that has nothing to do with nativism.

Durbin used this tragedy to negatively generalize about Americans and:

the hate and latent violence that lives in the hearts of too many in this land.6

It’s easier and scores a lot more liberal political points to accuse Americans of being hate-filled nativists than to admit that this is not a cultural or racial issue. At its most extreme, offensive anti-American pandering by Democratic Party members will justify more spending and earn votes from Americans shamed into believing that taking in the poor from other countries is a noble act we are duty bound to carry out no matter the cost. This will encourage and promote nativism, which the Democratic Party will angrily condemn even while liberal policies push Americans farther to the right.