Are we at risk of running out of minorities for Democrats to pander to? Black Americans in poverty wore out their welcome. They speak too strongly to the failure of liberal politics to do anything but bring in votes. Hispanics are a better choice, especially this year. They cover the same bases as blacks and keep the immigration war alive. That makes Hispanics both a goldmine and a battleground. They prove that minorities can have more power than a majority and if they play their cards right, can even force the real majority to pay for what they want.

When Democrats threaten that radical, far right Trump voters will destroy America they should have a look at the enormous success their party has had corrupting the concept of majority rule. They have made their minorities’ special needs everyone’s problem, whether we are talking bathrooms or sanctuary cities.

If minorities couldn’t vote, would anyone in Washington care?

The better question is how can Democratic candidates persuade their most politically valuable minorities that they will make their lives better? The answer is easy: they promise, cajole, point fingers, and lie. 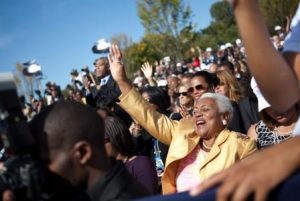 Minorities are a special needs majority

Politicians like to take credit and they don’t like heat. That makes their minorities our problem ethically, socially, and of course, financially.

Minorities have special needs that have more to do with politics than reality. That means we are called on to make sure no one is ignored no matter how quirky their wants or outrageous their demands. It also means appeasing those guilty of violating laws passed to control immigration and illegal drugs.

Muslims and transgenders are new to the pandering list, that last group notable because of the impact they have made despite their tiny numbers that redefine what “minority” means. Fortunately the issues they have dumped on us are legal, not financial. They may get their way in the courts, but changing bathroom signs won’t cost us a lot of money.

Other minorities are different. Politicizing their wants costs us.

One special minority for a very special year

When it comes to minorities with special needs there is only one that really matters these days. We all know which one it is. Like radical Muslims, the illegal community is one politicians demand we tiptoe around.

“Words matter. Referring to an entire community as ‘illegal’ is dehumanizing and antiquated,” said CHC Chairwoman Linda T. Sánchez (CA-38). “If Republicans had it their way, they might still be referring to Mexicans as ‘wetbacks.’ Republicans should focus on more important things like passing a budget and resolving the financial crisis in Puerto Rico, rather than finding senseless ways to attack our community with derogatory language.”1

Those are pretty strong words, but we are familiar with Democrats tossing the race card to get what they want. It is becoming a mainstay of Hillary Clinton’s campaign.

Donald Trump got the message. What happened to mass removal? Once you’ve said something that causes offense it’s best to stick to your guns. Waffling only makes it worse.

Minorities in poverty can be put to good use. It would be a catastrophe for Democrats if they suddenly rose from the depths of despair. That hasn’t happened yet. Even Trump managed to get some mileage out of poverty with his ham-handed ‘What have you got to lose?’ attempt to appeal to African American voters.

He won’t be stealing the black vote anytime soon.

A pre-convention Pew Research poll showed that 91% of blacks supported Clinton, which is not all that different from the 90% support for Obama in the race against John McCain and 96% in Obama-Romney.2 The news isn’t much better for the Hispanic vote. For those who are either bilingual or rely on Spanish, 80% side with Clinton.3

Democrats pander better than their opponents. They worked hard to earn their reputation for giving things away. What has their generosity with our money and legal system accomplished? Listen to what our two presidential candidates are arguing over. They gave minorities the power of a majority.

Cash for votes doesn’t always mean passing out dollars to get voters on a bus to the polls. There are legal ways to bribe.

Washington has 92 programs for people with no money that cost us $799 billion4 when Obama started his second term. Decades after Johnson declared war on being poor a federal report found:

Today, the poverty rate is stuck at 15 percent-the highest in a generation. And the trends are not encouraging. Federal programs are not only failing to address the problem. They are also in some significant respects making it worse.5

When we talk about being poor, we know who we are talking about:

Blacks in poverty can vote and they vote for Democrats. Illegal immigrants don’t have the vote yet. When they finally get it through some shady Democratic sleight of hand, look out. They are the special needs minority that matters.

Minorities are special but it’s not just about money

Hispanics can steal some of the poverty thunder from Black Americans, but blacks can’t compete on the immigration front. Too bad. That puts Hispanics in first place. Even Donald Trump reconsidered his strong public rhetoric on deportation, which was a pointless gesture given that much of the bloc has already sided with Hillary.

At the end of the day the best minority is the one whose special needs can be dumped on taxpayers and used to bring in votes. A rapidly growing Hispanic population means their time as a favorite minority is limited. If we ever pass an immigration bill and start illegals on the road to citizenship it will be time for Democrats to search elsewhere.

Who comes next? How desperate will Democrats get? How about citizens-in-waiting living in other countries?