There are no Democratic cosponsors to H.R. 3004, but the House vote that gave approval to Kate’s Law shows that at least 24 Dems are willing to publicly place Americans first and illegal aliens second.

That’s not the case for most of their colleagues. Party politics came first when House Democratic Caucus Chairman Joe Crowley (D-NY) came out against the bill:

Kate’s Law would further criminalize repeated denials of entry into the U.S., making it harder for people coming here on employment visas, for family needs, or even seeking asylum to be treated fairly.1

The needs of Crowley’s party aside, illegal reentry is a tremendous enforcement problem. What he doesn’t admit about Kate’s Law is why we don’t want these people to come back. The Democratic Party refuses to recognize that if you are deported it’s because you did something illegal.

H.R. 3004 is short. It’s not hard to read. The bill places special emphasis on the very worst illegal aliens. Words like “felony,” “murder,” “rape,” and “kidnapping” stand out. You can read the law here, at Congress.gov.

Offenders fall under the penalty provisions if they are kicked out and come back. Other than sowing more Democratic pro-illegal immigrant propaganda there is no common sense excuse for opposing this bill, but then there is never much sense to this kind of party politics. 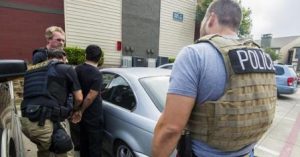 What Kate’s Law was designed to do didn’t stop politicians on the left from stumbling over their own misplaced loyalty to alien offenders. Here are three examples of how Democrats justify their opposition to H.R. 3004.

Lofgren: this criminal is worse than Kate’s Law

California Rep. Zoe Lofgren opposed H.R. 3004 in part because the enhanced penalties for reentry were shorter than the time the alien who murdered Kate Steinle had already served:

The offender had been deported multiple times. He had served 16 years in federal prison, so the idea that the 10 year enhancement would have fixed this is just misplaced.2

That’s a good argument for stepping up penalties, but that isn’t the solution her party prefers.

Democrats repeatedly call this bill “anti-immigrant,” which is an irony of sorts after you have read what it does and who it targets. Are these deported aliens the people liberal America wants to support? Removal from the U.S. didn’t seem to matter to Rep. John Conyers when he supported his party’s cause:

Finally, this bill perpetuates the fiction that immigrants are somehow inherently criminal. Nothing could be further from the truth. Numerous studies examining this issue conclude that immigrants actually commit crimes at a significantly lower rate than native-born Americans.3

We tend to have more tolerance for our own citizens when they offend, but the real argument Conyers makes is that being deported should not send up a red flag. We heard the same thing from another Democratic House member.

Nadler: does being deported matter?

Is illegal reentry by a deported alien a minor offense or perhaps no offense at all? Congressman Jerrold Nadler (D-NY) argued against “this cruel legislation,”4 calling H.R. 3004 “callous and irrational.”5 He used a single example of an individual who was deported because of a drug offense and would be penalized by Kate’s Law and then he concluded:

This bill would dramatically expand the mass incarceration of immigrants, even for those with minor offenses, and those who simply seek refuge in our country.6

Refuge in America is not the same thing as refuge in the arms of the Democratic Party. Fortunately, if criminals are incarcerated they can only hurt each other.

It’s possible that Democrats go blind when they read law enforcement bills. More likely, party values are more important than keeping people safe because lawmakers are so isolated from the real world that what can happen to Americans like Kate Steinle is little more than a partisan inconvenience.

Not deterring the influx of illegal aliens is one of the most important Democratic Party values of all. The age of Obama was all about permissiveness and reducing penalties whether from drug dealing or immigration crimes. The fact that Kate’s Law was written to deal with criminal aliens doesn’t imply that all immigrants are criminals, but if Democrats want to play it that way perhaps it’s time to make their mass deportation fantasy scare story come true.

For the time being Democrats can rest easy knowing their party’s values are safe and secure.

The House passed Kate’s law five months ago. Ted Cruz introduced the bill twice in the Senate, most recently as S.45 in January 2017.7

Apparently that’s where it will sit. Despite support from Cruz and his 14 GOP cosponsors this one is stalled. Perhaps the GOP Senate is too perplexed trying to decide how to put DACA back on the books without looking like Democrats.