The outcry has been far out of proportion to the first 121 illegals picked up.1 It’s not as if Jeh Johnson never warned us. He was surprisingly candid, considering how far removals stray from Democratic Party policy. The problem is that those voicing objections will never hear what Johnson said:

This should come as no surprise. I have said publicly for months that individuals who constitute enforcement priorities, including families and unaccompanied children, will be removed. 2

The newly-arrived have been relegated to the enforcement list, or at least that’s the plan we have heard. While this sounds more than fair, there is no such thing as fairness in the immigration debate. This is especially true when it comes to a falsehood being sown by the left. 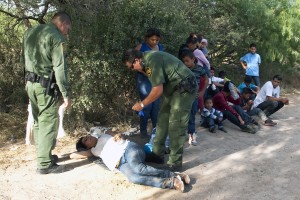 Beware! Securing the border is a dirty, leftist trick.

You might think that securing the Southwest border means keeping people out. Depending on who you ask, you could be right. You could also be very wrong.

When the Congressional Hispanic Caucus published its Immigration Task Force Priorities, border security was near the top of the list because:

A sovereign nation has a right and duty to control its borders, and this responsibility is more urgent in a post 9/11 America.4

That was good thinking, except for one tiny detail. “Control its borders” doesn’t mean the same thing to everyone:

Securing our borders should not be done at the expense of human and civil rights, bi-national cooperation, input from local border communities, or the protection of the environment.5

That’s right. Tricked again. The border surge is a refugee crisis, not an illegal immigrant crisis that would justify ICE raids. The chairwoman of the CHC lamented:

Invading homes is inhumane and adds to the trauma of these families fleeing violence and oppression. Many recent immigrants from Guatemala, Honduras, and El Salvador are escaping one of the most dangerous regions in the world.6

Rest assured that the only ICE raids that won’t be considered inhumane are raids that never happen. Besides, we are only hearing half of the story.

There is another side.

It’s not entirely fair to say that we were tricked by turning illegals into refugees. It’s hard to know who is who and with so many here there are certainly plenty of women and children in the mix. Why this makes a difference in a country pointing fingers over gender inequality is anyone’s guess.

This is another case where the trick me once rule applies. When we heard about deferred action (DACA) and childhood arrivals, who would have thought that illegals age differently and are still in childhood until they reach age 30?

During a House Judiciary Committee hearing, voices from the other side of the debate issued a warning about our Central American refugee crisis:

It is not just UAMs who are arriving – adults bringing along minors are also coming. Since 2011 the number of apprehended individuals comprising family units has increased from 13,600 to 42,000 for this year as of June 16th. Taking into account just half of this year, we have seen a 143% increase in families apprehended at the border since 2012.7

To make matters worse, our “refugees” might be fleeing to something, not running away. Committee Chairman Bob Goodlatte noted:

According to the [Rio Grande Valley Sector Intelligence] report, when these individuals were asked why they made the journey to the United States, approximately 95% indicated that the main reason was to take advantage of the “new” U.S. “law” that grants a “free pass” or permit (referred to as “permisos”) being issued by the U.S. government to women traveling with minors and unaccompanied alien minors.8

The word got out. America loves immigrants. Who can we thank for that?

The timing of the ICE raids was far from opportune for the Democratic Party, which badly needs a bone to toss to activists and the faithful after last year’s setbacks. An illegal community looking for protection from our government from its own laws suddenly has lots of things to worry about, including an upcoming Supreme Court decision on Obama’s immigration orders and a possible Republican presidency.

Conservatives enjoyed a big victory when the court blockade against the president’s executive actions was upheld. This didn’t stop the DACA program already in effect from signing up new beneficiaries, but it sent a clear message: Obama got away with DACA, but that’s as far as it goes until the Supreme Court has its say.

What’s the solution? Create refugees. Lots of them.

At the end of FY 2015 Obama’s deferred action program had approved 1,142,935 applications.9 121 removals hardly seem worth talking about in comparison, but a letter from 145 congressional Democrats calling for a halt to the ICE raids swapped “refugees” for “illegals” and added a plea for women and children for good measure:

The goal of this comprehensive refugee approach should be to ensure that Central American refugees, particularly mothers and children, are able to live free from an endless cycle of violence and persecution.10

Despite assurances from Democrats that the comprehensive immigration bill we are still being harangued about would secure the border once and for all, stopping the influx doesn’t seem to be a priority. Sounding none too happy with the president, the letter charged:

Thus far, your Administration has responded to the Central American refugee crisis with an emphasis on deterrence rather than the need for a regional refugee solution.11

The administration was clear about the fate of these individuals as part of its regional solution:

we have also committed foreign assistance resources to improve capacity of these countries to receive and reintegrate returned individuals and address the underlying security and economic issues that cause migration.12

At least one House Democrat must not have been paying attention:

Furthermore, if the past is any indication, raids can target the wrong people, prevent due process, and stoke fear amongst immigrant communities, pushing them deeper into the shadows. I urge the Administration to keep its word when they enforce our immigration laws and target ‘felonies not families.’13

Keeping its word is what we saw from Homeland Security and ICE at the start of the year.

We let these people in. We housed them, fed them, provided medical care, and if activist lawmakers had their way, we would be hiring lawyers to keep them here. Our thanks is that more will come and many will never leave. That’s why we need to step up the pace of ICE raids. Instead of spreading the message that illegals are welcome, Mexico and Central America need to see their citizens coming back, one at a time or family by family, whatever it takes to get the job done.