Are conservatives being too harsh? We shun and despise those who want a Hillary Clinton presidency. Maybe it’s because we remember our first affair with a Clinton. How can we live alongside friends and neighbors who want to do it all over again?

Should we be more tolerant? There are reasons people choose a Clinton for president. In fact, making the bad choice to put Hillary in office proves 11 things about you that just about anyone could guess.

You match a profile.

Why a Hillary Clinton presidency is perfect for you

Let’s add one more to the list courtesy of FBI Director Comey:

You care about America’s important challenges

There are too many things to worry about to waste time making sure our leaders aren’t as crooked as we’ve been warned, or at least that’s what your candidate is saying after Comey’s Friday surprise.

What gives Hillary Clinton the right to put the FBI on notice over new evidence after she convicted Trump on hearsay? She’s a Clinton. She can do anything she wants and lucky for her, you support that. 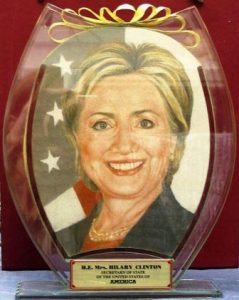 No, not worthless as in having no value. Even if your choice is Hillary you still might have some nominal worth. Not much, but some.

The kind of worthless that makes a Hillary Clinton presidency a good pick means no assets, no savings, a hand to mouth, paycheck-to-paycheck existence that you don’t have the gumption to do anything about.

That’s OK. It’s not your fault, or at least that’s what your candidate will tell you.

If you’re trying to do better, don’t vote for Clinton. If you’re a bum, vote Clinton. Democrats take care of people who don’t fend for themselves. Look at what a great job they’ve done in Obama’s violent hometown.

You think America needs to be humbled

If you believe America’s role in the world is to get along, put up, shut up, and let the Third World abuse us, a Hillary Clinton presidency is for you.

Is America rotting at the core from income inequality, racism, and fundamental unfairness towards anyone who isn’t white? Yes? Vote Clinton.

Does citizenship have any value? If your answer is “no,” “five hundred dollars,” or “we should give this place away,” then Hillary Clinton is your girl, as Michelle Obama would say.

You don’t need to succeed

If you expect government to pay your way from publicly funded preschool to a county-paid funeral, Hillary is for you. Why should you spend your welfare check on life’s necessities when you’re just getting by?

Let a Clinton pay your way.

Lucky you! If you support another Clinton presidency and don’t have much cash you will keep getting taxpayer help. Paying too much for insurance is for suckers dumb enough to work hard so they can afford the cost of this burdensome government mandate.

Waiting for that great-paying job Obama has been hawking for eight dreary years? It’s coming. Hillary Clinton is talking about lucrative jobs too, just like she talks about everything else Obama promised and never delivered.

Just wait this one out. Sooner or later the government will hand you that six-figure gig that makes getting up every morning worthwhile. Of course then you would have to work. You will have to pay for all of your health insurance, too. If you don’t, your government will fine you.

You believe that truth is an inconvenience

We all do it. Some of us do it more than others. Apparently Hillary does it whenever necessary, but since part of being a politician is not telling the truth we should give her a pass.

Democrats are big believers in transparency. If you believe that we should get the lies out there for everyone to hear, then you know what to do when you step up to that voting booth.

It feels better to know for sure you’ve been had, doesn’t it?

Nationalism is for Republican fascists, not people like you

If you’re not too hot on America (and if you’re a Clinton voter that’s a foregone conclusion), then you know that nationalism is for the scary wing of the GOP. There’s only one thing we can do to stop it. Obama’s been doing it for years. Talk. Appease. Pontificate. When all else fails, threaten. Then do nothing.

How else will we put America in her place?

You wanted a better life. America is the place to find it. You made it here and look what happened. There are people who want you to leave.

A Hillary Clinton presidency won’t let that happen. The longer you stay on the lam from ICE, the easier being an American is going to be. Why? Democrats feel overwhelming guilt when they don’t give the ranch away so they can tell everyone how wonderful they are.

Just remember that you aren’t supposed to vote. You don’t have a say in this bad choice.

Hillary will help if we give her a chance. She’ll take money away from people who have too much so they don’t feel guilty and won’t be the middle class’s enemy any more.

Democrats, Hillary, and the Clinton Foundation should have more money

Politicians deserve every penny they can get, don’t they? After all, who makes your life better? Certainly not you. If we keep our leaders content with lots of cash and perks there is no limit to the things they will do.