Home » Economy » Government Retirement Benefits Paid for by Your 401(k)

Today we got our first real look at the GOP tax proposal. The rumors were wrong. Republicans made a wise decision and spared tax-free 401(k) contributions. Not so lucky were the state and local tax deductions. The property tax write off also took a hit, albeit one that won’t affect nearly as many people.

Symbolically it’s not as egregious for your taxes to go to government retirement benefits if they aren’t being pulled from what you set aside for your own retirement. State and local taxes still go a long way to funding these benefits, though, and when we can’t write them off it’s just another reminder of how much we pay for public sector retirement programs that are often a lot more generous than our own.

Wouldn’t you rather toss those taxes into your 401(k)?

Following is the original post published before the tax plan was unveiled:

We aren’t going to get a tax reform win without some losses, but when we pick and choose we shouldn’t be foolish about it. The Daily Caller describes how disunity is already showing its face again over what tax reform brokers hint they will do with our non-taxable 401(k) contributions. It’s hard to guess how GOP lawmakers think they can take that benefit away. They will further anger a restive nation where few receive the government retirement benefits they fund with every paycheck.

Can we back Democrats on 401(k)s and government retirement benefits?

Can Republican voters back Democrats like Arizona Congressman Tom O’Halleran who want to protect the non-taxable portion of 401(k) contributions?

The proposal to limit tax-free 401(k) contributions is a completely misguided and hurried attempt to cover the costs of partisan tax reform,” said Rep. O’Halleran. “We should not be raiding the retirement plans that millions of Americans rely on every day.1

If tax reform bigwigs including Rep. Kevin Brady (R-TX) push this provision forward to make up for lost revenue that’s what many conservatives will be forced to do. 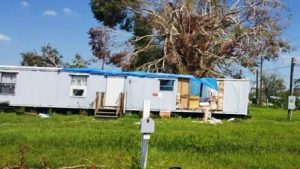 Government retirement vs. 401(k)
Which buys you this?
HUD photo

We’re constantly told that Social Security will be there for us no matter what, so it’s rather ironic that Democrats are in a position to back tax-free 401(k) contributions. If Republicans decide they need their taxes sooner it will be a role reversal that few of us who contribute as much as we can are going to be able to live with.

It makes it even harder to back the opposition when we consider that Democrats are also the ones who are usually behind saddling us with government pension debt. Ask anyone who lives in the city of Chicago or state of Illinois what these benefits do to their tax bills.

We will find out soon if Speaker Ryan forgot what he said about 401(k)s ten years ago. When President George W. Bush signed the 2006 Pension Protection Act Ryan lauded the contribution provisions in the bill:

Scheduled to expire in 2010, the Pension Protection Act has made permanent the increased pension and IRA contribution limits from 2001 to provide further opportunities Americans to plan and save for their retirement future.2

Priorities change. Republicans need a win. That could spell trouble for private sector workers who have to fund their 401k(s) and also come up with the taxes to pay for expensive retirement benefits at the state, local, and federal levels.

Government retirement benefits: you pay with every check

Another tax reform scheme puts your state and local tax deduction at risk. What does that have to do with your 401(k)? Government retirement benefits.

Here in Illinois paying for public pensions is the first consideration when we talk about income taxes, property tax, fines, fees, penalties, levies, and sin taxes. We have to pay for public worker retirements before anything else because the laws are on the books and so far we have been pitifully unable to do much about them.

If the GOP cuts any part of the state tax deduction that means no credit for the amount of our state income and local property taxes that go to funding retirement benefits for government workers. Even if Republicans concede on property taxes, it doesn’t address our state tax bill. State tax deductions keep giving year after year because costs for government workers keep going up, thanks to lawmakers’ fear of taking away retirement perks even if we can’t afford them.

In a country where we cheerfully admit that people would rather consume than save and aren’t prepared to stop working when they reach retirement age why would we even hint that the best incentive to save for the future might be slashed to almost nothing? That’s an idea that would never fly with public employees in states that require minimal contributions for maximum benefits.

This feels more and more like health care reform. Republicans made a promise. They will do anything to fulfill it and found out in the process that what they want to do is not sustainable. Someone has to pay.

So what’s the answer: do we back Republicans if they decide to slash our tax-free 401(k) contributions, or do we back Democrats who will argue to preserve this incentive to save while they stick us with government retirement benefits packages for civil servants?

Author’s note November 1, 2017: the title and content for this post were revised and the photo added after publishing. I think the current version better describes the conflict between funding private and public sector retirements.