Home » American Ideals and Values » Generosity is an American Affliction: Get Over It

Here’s a quick history lesson: the pilgrims came to America nearly a century and a half before the Declaration of Independence was signed. They intruded on a country that had no central government or laws. The states did not exist. America was a wilderness. The indigenous people didn’t need them and in retrospect would have been better off had they never come. American generosity has absolutely nothing to do with the first Europeans settling on North American soil. The only thing these interlopers had in common with the Syrian, Mexican, Central American, and other foreign nationals we are sharing the fruits of American generosity with is that no one wanted them or asked them to come here. 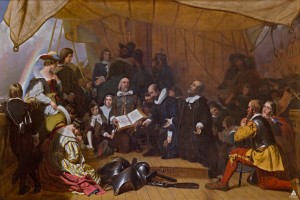 Embarkation of the Pilgrims
Architect of the Capitol

That’s not the history lesson we were just taught from the Oval Office. The president suggested that we should “honor”1 those who lent the pilgrims a helping hand, presumably Native Americans. Does he remember how the story turned out for those we are supposed to thank? They would have done better had they made a feast of their refugee guests.

We can’t eat the refugees and immigrants coming here unbidden now. We don’t have to accept them, either, out of the spirit of generosity or any other principle being used against us, but that’s not the direction events are taking.

Who does America’s generosity benefit most?

… we should have in place a process that, to the best of our ability, prevents these same atrocities from reaching our shores.3

We cannot close our borders off exclusively to any immigrant group based on creed, color, religion or sexual orientation.4

“Cannot” is a pretty strong word and actually, we can and should do exactly that. The policies of the party behind Rush and his colleagues have proved beyond any reasonable doubt that we can’t and won’t stop anything from crossing our borders or shores if there is a political payoff. Instead of criticizing those opposed to appeasing Muslim pressure groups and the White House because we “should” have a process to stop terrorists from abusing our generosity, liberal members of Congress should consider how far they have already stretched the limits of tolerance.

During a hearing on abusing our system of granting asylum, House Judiciary Committee Chairman Bob Goodlatte gave the American people some credit for our generosity:

We have maintained a robust refugee resettlement system, taking in more United Nations designated refugees than all other countries combined. We grant asylum to tens of thousands of asylum seekers each year. We expect to continue this track record in protecting those who arrive here in order to escape persecution.5

Instead of more pats on the back for taking in refugees on the taxpayer dime, the question being raised now is what American generosity has done for the world lately.

The answer, as usual, is that we aren’t doing enough.

While Democrats bang the drum of extending amnesty, asylum, and boundless American generosity, questions had already been asked about how the U.S. deals with refugees and foreigners seeking asylum.

Citing a 600% increase in asylum seekers arriving at our Southwest border from 2008-2013, House Judiciary Committee members sent a letter to the Government Accountability Office6 calling the refugee problem “a largely unchecked epidemic of fraud in the Department of Homeland Security’s asylum program.”7 They further warned that:

Indeed, USCIS has evidence (that it has never seen fit to publicly release) that at least 70% of affirmative asylum applications contain indicia of fraud.8

Add to those numbers the 100% of illegal immigrants whose presence working and living in America is a fraud and then ask yourself: why does generosity demand that we do even more while bills like 2015’s Asylum Reform and Border Protection Act (H.R. 1153) fail to become law?9

Generosity based on partisan principle is not only foolish, it’s dangerous. The American people have been hog tied by the Obama administration and will be forced to swallow the lie of rigorous screening, oversight, and security, even though everything Democratic Washington stands for demands that we do the exact opposite and throw the gates open wide in the name of American inclusiveness.

The true measure of our generosity is what we do when no one is watching. A reckless show of open-armed acceptance for the sake of principle that has proved a disaster for immigration policy is the least generous of gestures to the people who have been already done enough and are the ones who really count: Americans.