Home » Big Government » Denial is Governing Us From Capitol Hill

Just how disgusted are we with our senators and representatives on Capitol Hill? Quite a lot, results from a Pew Research poll show.1 Only 19% of us claim to trust the government. Only 1% more think the programs we pay for are being administered as they should be.2

The poll only confirms what we have heard before. We obviously aren’t in denial about how we feel about our lawmakers’ efforts. How do they feel about us? 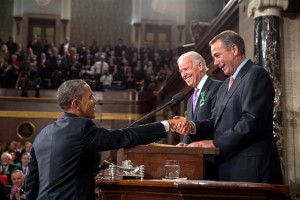 Politics of hate or a nation disgusted by denial?

A self-important Harry Reid misread the problem we have with government. He blamed the “politics of hatred”3 on his opponents instead of admitting that we have better reasons than ideology to despise what happens on Capitol Hill:

Both elected officials and candidates must realize that our words have deep meaning and can influence people far and wide. That’s why I’m disappointed that instead of talking about issues important to the middle class, Republicans have turned to the politics of hatred and division.4

The same day Reid made these remarks, Mitch McConnell gave us a different story on the middle class from the other side of the divide:

Obamacare is a direct attack on the Middle Class of our country. It’s a partisan law that puts ideology before people, that hurts many of the very Americans it was supposed to help.5

The words that come down from the Hill may influence us, but not in any way either of these Senate bigwigs should be proud of. We can attribute at least some of our anger to how lawmakers are unable to do no harm when they decide to improve something. Perhaps that’s why periodic threats of a shutdown, including the one threatening right now, seem to bother those responsible for congressional dysfunction a lot more than they bother us. No government may well mean better government.

Those making their living on Capitol Hill are governing in denial, spending too much time trying to convince us that things are happening that aren’t. Examples are not hard to find. Here is a gem.

Denial on Capitol Hill: hypocrisy at its very best

Many of us are shocked to see what is happening to our health insurance premiums in 2016. We aren’t the only ones with our mouths gaping. Democrats in the Senate are already worried about the 2018 Cadillac tax tucked into their health care bill. A socialist, pro-union presidential contender redefined hypocrisy with his statement about why the special tax on high cost plans is such a bad thing:

the tax not only punishes hard working Americans, it is simply bad policy. We should make sure that all Americans receive affordable, high quality health care.6

If Bernie Sanders lived up to his bombast, spendy health plans would be precisely what we would tax because we would be targeting those doing well, but that’s how governing by denial works. What you say, do, or don’t do doesn’t matter because you reinvent political reality as you go along. Hilariously, the most recent GOP-led Senate vote to eliminate Obamacare also repealed the dreaded Cadillac tax,7 doing Democrats a favor they can’t approve and the White House will invariably say no to.

Governing by denial is easy. Here are five ways the people we pay to represent us do it.

1. Governing by crises that don’t exist

Obama is in denial about the climate change catastrophe just like our Capitol Hill flunkies are in denial about practically everything of significance they try to turn into a crisis.

Little or nothing has been done to abate our worst problems. The crises Congress is most comfortable with like immigration, debt, and spending don’t even have solutions because lawmakers will never agree on what to do. Denial means refusing to admit that the crisis of the moment is a straw man. Disaster enters the picture when we really do have a crisis and it takes too long to act, like dealing with the surprise over something called “ISIS.”

Amnesty will create businesses and generate jobs, doing something about climate change will help us crack down on terrorism, giving Iran its money back will stop its nuclear weapons program, and overhauling health care is going to save you money.

Only one of these has been put to the test. We found out we were lied to.

This is a good one to fall back on every time Republicans take a stand on a new budget bill and then capitulate at the stroke of midnight before our government closes its doors. Taxpayers hear about a great victory at the 11th hour. After the number crunchers do their dirty work we find out that we are spending as much or more than we were before.

There are precious few real victories to be had on Capitol Hill these days. Symbolic votes don’t count. A November 4, 2015 post on the GOP Senate site8 warns that “Obamacare Sticker Shock Stress Sweeps America.” Like the ACA, spending and government budgets seethe with denial even while we are told that things are getting better. Like taxes, the bad stuff never goes away. It festers on the Hill and only gets worse.

4. Assuming the people like your party because you want them to

Very few people want to be disliked. It runs against human nature. Politicians especially want to be liked because their jobs depend on it.

I like Paul Ryan and was happy to see him take over for John Boehner. Still, there was some major league denial in the speech he gave on Wednesday:

That’s where Hillary Clinton and the Democratic Party come in, too. Come on, Mr. Speaker. Do you really believe that wanting the nation to shift to the right will make it happen? Have another look at the polls and remember who won the last two presidential elections.

Sorry, GOP. You are guilty of this one, too. Until a bill is passed or a law changed nothing happened, no matter how many times Republicans vote for it. We expect GOP members to vote right. That’s why we call them Republicans. You are all in denial if you think that one-sided, partisan displays of unity mean anything. They don’t. If they did, Obamacare would no longer be the law of the land.