Home » Immigration » Democratic Platform for 2020 Will Risk Your Safety

Child sex abuse. Murder. Rape. Presidential candidate Elizabeth Warren doesn’t get it. Even if federal law enforcement wanted to pursue “punitive anti-immigrant policies,”1 it doesn’t have the time or the resources. ICE is too busy rounding up criminals who commit crimes like these and who skip back and forth across the border with impunity after being deported.

ICE and CBP help keep the public safe. These agencies do their best to keep bad people out of the country. Democrats don’t care. They bet their future on putting illegal immigrants first, so their Democratic Platform for 2020 must endanger the public for the sake of making a point we know is false. The party has no choice.

No matter what you hear it’s a fact that some illegal immigrants break the law. When we arrest them Democrats look bad because they put tremendous effort into convincing the public that they pose no threat. Their claim that immigrants are more law-abiding than citizens is a pernicious, irrelevant insult to Americans who were born here and even more so to those who are crime victims.

ICE represents these crime victims with the Victims of Immigration Crime Engagement (VOICE) program. The Democratic Party represents its own interests and puts immigrants on a pedestal while members on the House Judiciary Committee blames citizens for crime: 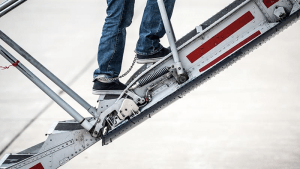 2020 Democratic Platform will say goodbye to this
ICE Photo

Whether or not this is true, it doesn’t mean that people don’t get hurt when we refuse to enforce the law or that it’s not our fault when we let it happen.

The fact is that some of the foreign-born individuals Democrats want to keep here despite their illegal status commit horrendous offenses. Some of the people they want to admit will turn out to be just as bad or worse, but party policy dictates that we find out after the fact that we made a terrible mistake.

Repeating over and over again that immigrants are the backbone of our economy will not change this. Blaming federal employees who have the courage to put their lives on the line – something few in Congress would even consider from the gilded safety of their Capitol Hill perch – is another insult that we should not tolerate and yet we do.

The final insult to the American people will come if a Democrat sits down in the Oval Office in January 2021. In the meantime, the party will have to satisfy itself by issuing anti-ICE propaganda that activist members will deny leads to crimes like this:

According to court documents, on July 19, following a review of surveillance footage, authorities observed [suspect] Cook taking out a can, which he shakes, and then he is observed spray painting the words “F— ICE” on the ICE sign in front of its Mt. Elliot office.3

If this was a Democratic campaign office the party would call it a Trump-inspired, white supremacist terrorist act. Since it happened to our chief federal immigration enforcement agency, Democrats can write it off to justifiable civil disobedience.

Democratic Platform for 2020 must include minimizing public safety threat

ICE is a tremendous obstacle to the few remaining Democratic candidates who absolutely must prove that immigrants are not a threat to public safety. Federal agents demonstrate over and over again that the risk to the public is very real.

The evidence is overwhelming. ICE issued another news release on September 30, 2019 after arresting 97 criminal aliens. 19 reentered the U.S. after they were deported. Their offenses included:

And the news releases from the agency Democrats want to render ineffective or eliminate altogether just keep coming.

Democratic Platform must include ICE

It doesn’t matter which Democratic presidential contender gets tapped next year. The Democratic Platform for 2020 must include keeping illegal immigrants in the U.S. through blissful denial and a massive propaganda campaign to shift the nation’s focus to vulnerable, helpless refugees and our nation’s history of providing shelter to the downtrodden and destitute.

This package is only half of the story, but that doesn’t mean too many Americans won’t swallow it.

How can we trust Warren and Sanders when we keep hearing this?

We cannot continue to employ inhumane tactics involving rounding up and deporting tens of thousands of immigrant families to address a crisis that requires compassion and humane solutions,” Sanders wrote in a letter to President Obama, Secretary of Homeland Security Jeh Johnson and U.S. Immigration and Customs Enforcement Director Sarah Saldaña.6

With Trump at the helm Sanders “condemns ICE and CBP Impunity”7 and demands:

The time is long overdue for a complete overhaul of our immigration system. Instead of demonizing the undocumented, we must provide a path toward citizenship, immediate legal status for the 1.8 million young people eligible for the DACA program and create a humane policy for those seeking asylum at the border.8

Immediate is important. It gives us less time to think.

Elizabeth Warren sings the same tune with an equally threatening tone. Her plan doesn’t mention going after criminal immigrants. Instead she wants to restructure CBP and ICE, beef up oversight, and divert the agencies to other homeland security imperatives.9

These abuses she wants to eliminate will include enforcing the law in opposition to Democratic Party values and as a consequence, protecting the public.

Like the rest of his campaign, Joe Biden’s immigration plans are sketchy. Enforcement and border security in line with our values are what he promises on his campaign site.10 Does he really believe Democrats will agree to this and that voters will ignore his inability to explain away Obama-era deportations during the September 12, 2019 Democratic debate? In the increasingly unlikely event that he gets tapped, Biden will have to swallow a solution he may not want to live with because there is no possibility that his party will greenlight a platform that takes amnesty and non-enforcement off the table.

That’s where our values enter the picture. The only values that matter are the values Democrats insist we embrace.

Democratic Party solution for immigration crimes: sit back and watch

It’s amazing to consider that so many Americans believe anti-Trump, pro-amnesty propaganda that they turn a blind eye to what happens when we don’t abide by our laws.

In ironic contrast to a flood of reports about vulnerable asylum seekers from Central America, ICE issued a news release on September 13, 2019 about 121 people kicked out of the U.S. and sent back to El Salvador:

Those arrested during the operation are implicated in numerous human rights violations against civilians, including the capture, arrest and/or transport of civilians who were subsequently mistreated, and in some cases, beaten, electrocuted and killed.11

Three days later we heard about a man we have already kicked out three times who is wanted for murder in California,12 the same state that let the illegal immigrant who killed Kate Steinle off the hook.

ICE has a voice, too and Democrats won’t like it

Nationally, approximately 90 percent of all people arrested by ICE during fiscal year 2019 either had a criminal conviction, a pending criminal charge, had illegally re-entered the United States after being previously removed (a federal felony), or were an immigration fugitive subject to a final order of removal.13

That 90% figure is where your safety comes in:

To the public, who want to live and raise your families in safe neighborhoods, we ask you to hold your lawmakers accountable before you, or someone you love, is unnecessarily victimized by a criminal ICE could have removed from the country.”14

That accountability is what the Democratic 2020 platform will put an end to. Party honchos are ready to risk your safety to seize power and when they succeed, immigration enforcement will be a thing of the past.

No wonder Democrats are determined to put the handcuffs on ICE. Agents prove time and again that we don’t hear the real story about asylum seekers.

ICE began its “Family Fraud Initiative” in April 2019. The agency details what it discovered including 238 “fraudulent families,” 329 phony documents to back asylum appeals, 350 criminals, and 50 unaccompanied minors who were not what they claimed to be.15

While federal agents try to sort out the bad guys from those merely seeking to live in a better place at our expense, Democrats looked for new excuses to blame our country for bad behavior:

The Trump Administration has refused to uphold its legal duty to provide protection for transgender migrants who have a credible fear of persecution and has failed to adhere to the 2015 ICE memorandum on the Care of Transgender Detainees. Pallone and Raskin wer [sic] joined by 33 colleagues who also signed the letter.16

I don’t know how big of a problem transgender migration is, but it’s not a stretch to blame Democratic Party pro-illegal immigration policies for the crisis at the border.

Shouldn’t we let ICE sort the criminals from those who are merely trespassing before we split hairs for the sake of another anti-Trump press release?

New ICE news from presidential candidate and ex-New York Mayor Michael Bloomberg’s state should give Democratic voters pause to consider just how foolish it is to endorse their party’s stance on immigration.

It should, but it won’t. Liberal America spent the year accusing conservatives of ignoring the facts about Trump while they did the very same thing with increasingly disturbing reports of who and what is being rounded up by federal agents.

Governor Andrew Cuomo praised the enforcement action after nearly 100 members of the ultraviolent transnational gang MS-13 were apprehended by the feds on Long Island.17

The arrests should not have come as any surprise. ICE is consistent and clear about the severity of the problem:

Over the summer Cuomo blasted President Trump’s immigration enforcement policies as “despicable and inhumane,”19 falling back on favorite Democratic Party slogan “diversity is our greatest strength”20 for support.

Diversity has nothing to do with the spread of violent gangs, another fact that will be lost on voters determined to help the party allow this kind of criminal activity to flourish.

The governor’s office also posts information for immigrants on how to protect themselves from ICE enforcement which, presumably, is just as accessible to transnational gangs as it is to run-of-the-mill illegals.

Expect anti-ICE talking points to figure heavily into the 2020 Democratic platform while agents risk their lives to stop the spread of violent gangs that slip into the country and are protected by sanctuary policies enforced in big cities like New York. Public safety will be increasingly at risk as the problem of illegal immigration and criminal immigrants grows, but that’s a detail Democrats will worry about later when, like immigration as a whole, it has grown to crisis proportions, can no longer be managed, and will suddenly by the fault of the Republican Party.

2. “The Truth on Immigration: Unmasking the Fiction Perpetuated by President Trump in his Address to Congress.” U.S. House Committee on the Judiciary. Democrats. https://judiciary.house.gov/story-type/letter/fact-sheet-truth-immigration-unmasking-fiction-perpetuated-president-trump-his, retrieved October 6, 2019.

This post was revised for clarity after the original publish date of October 8, 2019.