I laughed when Maryland Congressman John Sarbanes was tapped to lead the extremely partisan Democracy Reform Task Force. Democrats stinging from their Clinton catastrophe haven’t stopped spreading the word that our system of government is under attack, but the important question is not whether our democracy is at risk. It’s why anyone would trust one angry political party to be in charge of “reform.”

Democracy reform for which American people?

It’s pretty unlikely that our senators and representatives consider themselves to be the same American people that we are. Being ordinary is our job, not theirs. When Democrats talk about democracy under fire and defending ordinary people they are really talking about an attack on their party and what it offers the masses in exchange for power at the polls.

Democracy is supposed to be all about the voice of the people and this task force is just part of that picture. For example, H.R.3848, the “We the People Democracy Reform Act of 2017” rambles on through over 300 pages of reforms.2 That means most ordinary American people will never know what Democrats who sponsored the bill want to do to save their government.

Cosponsor David Price (D-NC) gives us a clue. His bill has “new provisions to address unprecedented conflicts of interest arising from [sic] Trump administration.”3 For once and for all,

Why do we need all this? According to Congressman Price,

Our most deeply-held democratic values are under threat.5

If you question whether those values include having a Republican in the White House, ask the task force responsible for keeping our democracy safe. 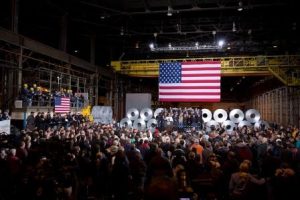 The Democracy Reform Task Force will call out the Trump Administration’s conflicts of interest and expose the Republican special-interest agenda, while simultaneously advancing a positive vision for improving accountability in our democracy.6

It doesn’t make sense that a notorious political machine relying heavily on pressure groups and activists will protect us from special interests, but that’s what Nancy Pelosi promised when she tagged the people to lead this crusade

which will advance legislative reforms to return us to a government of, by and for the people.7

The American people expect their elected officials to put the public’s interest ahead of special interests,” said Congressman Sarbanes.8

We may expect it, but how often does it happen?

Ethics do not exclude bias

Protecting our democracy should mean giving the people a fair, unbiased view. That’s not what this task force is about, as Rep. Sarbanes confirmed in a November 2, 2017 remark about Republican tax reform:

This tax proposal is a textbook example of how wealthy and well-connected special interests have hijacked our democracy.9

The solution? Let the Democratic Party make the decisions. It’s common knowledge that Democrats and special interests don’t mix and especially tragic that unions, public employees, LGBTs, undocumented immigrants, and other groups can’t find anyone to help them out.

One party-system is the final solution for our democracy

The Democracy Reform Task Force published “Swamped” in August 2017. It reveals how the Trump campaign made a mockery of ethics laws and regulations.10 There is no mention of the allegations that the DNC may have tinkered with who Democrats got to vote for in last year’s presidential election. Obama hijinks like deferring the health care Cadillac Tax to placate big labor is curiously absent. The only references to Obama are to Trump’s detriment.

Lucky for Democrats there are no glass houses in Washington.

Despite its mission to save our democracy to protect the people, the Democracy Reform Task Force and party members intent on taking back power from Republicans only leave us with once choice to save our political way of life: keep Democrats in office.

I don’t know about you, but that doesn’t sound like democracy to me.